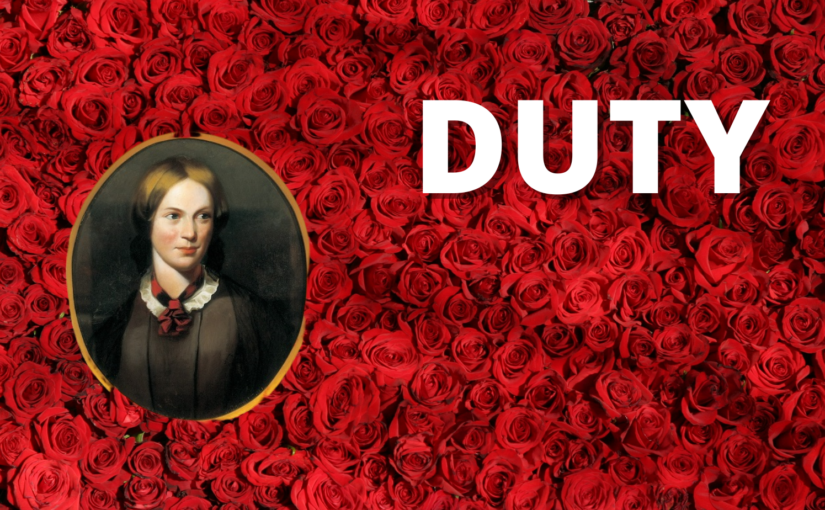 On this day in 1848 Charlotte Brontë was writing a letter. Nothing unusual about that; Charlotte Brontë was a prolific letter writer, and it’s thanks to the hundreds of letters that we still have of hers, largely to her best friend Ellen Nussey but also to others such as W. S. Williams of her publisher Smith, Elder and Co, that we know so much about her life and the lives of the Brontë family in general. The letter that Charlotte wrote exactly 174 years ago today, however, was a truly special one, and so we’re going to look at it in today’s new Brontë blog post.

In this letter Charlotte looks at ‘the first duty of an author’, but that’s a lot more exciting than it sounds for it leads to a long digression which looks at her opinion on her sisters’ work and on the nature of her protagonist Rochester. Here is the letter in full:

“TO W. S. WILLIAMS, August 14th, 1848.
My Dear Sir, My sister Anne thanks you, as well as myself, for your just critique on Wildfell Hall. It appears to me that your observations exactly hit both the strong and weak points of the book, and the advice which accompanies them is worthy of, and shall receive, our most careful attention.

The first duty of an author is, I conceive, a faithful allegiance to Truth and Nature; his second, such a conscientious study of Art as shall enable him to interpret eloquently and effectively the oracles delivered by those two great deities. The Bells are very sincere in their worship of Truth, and they hope to apply themselves to the consideration of Art, so as to attain one day the power of speaking the language of conviction in the accents of persuasion; though they rather apprehend that whatever pains they take to modify and soften, an abrupt word or vehement tone will now and then occur to startle ears polite, whenever the subject shall chance to be such as moves their spirits within them.

I have already told you, I believe, that I regard Mr. Thackeray as the first of modern masters, and as the legitimate high priest of Truth; I study him accordingly with reverence. He, I see, keeps the mermaid’s tail below water, and only hints at the dead men’s bones and noxious slime amidst which it wriggles; but, his hint is more vivid than other men’s elaborate explanations, and never is his satire whetted to so keen an edge as when with quiet mocking irony he modestly recommends to the approbation of the public his own exemplary discretion and forbearance. The world begins to know Thackeray rather better than it did two years or even a year ago, but as yet it only half knows him. His mind seems to me a fabric as simple and unpretending as it is deep-founded and enduring there is no meretricious ornament to attract or fix a superficial glance; his great distinction of the genuine is one that can only be fully appreciated with time.

There is something, a sort of ‘still profound,’ revealed in the concluding part of Vanity Fair which the discernment of one generation will not suffice to fathom. A hundred years hence, if he only lives to do justice to himself, he will be better known than he is now. A hundred years hence, some thoughtful critic, standing and looking down on the deep waters, will see shining through them the pearl without price of a purely original mind such a mind as the Bulwers, etc., his contemporaries have not, not acquirements gained from study, but the thing that came into the world with him his inherent genius: the thing that made him, I doubt not, different as a child from other children, that caused him, perhaps, peculiar griefs and struggles in life, and that now makes him as a writer unlike other writers. Excuse me for recurring to this theme, I do not wish to bore you.

You say Mr. Huntingdon reminds you of Mr. Rochester. Does he? Yet there is no likeness between the two; the foundation of each character is entirely different Huntingdon is a specimen of the naturally selfish, sensual, superficial man, whose one merit of a joyous temperament only avails him while he is young and healthy, whose best days are his earliest, who never profits by experience, who is sure to grow worse the older he grows. Mr. Rochester has a thoughtful nature and a very feeling heart; he is neither selfish nor self-indulgent; he is ill-educated, misguided; errs, when he does err, through rashness and inexperience: he lives for a time as too many other men live, but being radically better than most men, he docs not like that degraded life, and is never happy in it. He is taught the severe lessons of experience and has sense to learn wisdom from them, Years improve him; the effervescence of youth foamed away, what is really good in him still remains. His nature is like wine of a good vintage, time cannot sour, but only mellows him. Such at least was the character I meant to portray.

Heathcliffe [sic], again, of Wuthering Heights is quite another creation. He exemplifies the effects which a life of continued injustice and hard usage may produce on a naturally perverse, vindictive, and inexorable disposition. Carefully trained and kindly treated, the black gipsy-cub might possibly have been reared into a human being, but tyranny and ignorance made of him a mere demon. The worst of it is, some of his spirit seems breathed through the whole narrative in which he figures: it haunts every moor and glen, and beckons in every fir-tree of the Heights.

I must not forget to thank you for the Examiner and Atlas newspapers. Poor Mr. Newby! It is not enough that the Examiner nails him by both ears to the pillory, but the Atlas brands a token of disgrace on his forehead. This is a deplorable plight, and he makes all matters worse by his foolish little answers to his assailants. It is a pity that he has no kind friend to suggest to him that he had better not bandy words with the Examiner. His plea about the ‘ printer’ was too ludicrous, and his second note is pitiable. I only regret that the names of Ellis and Acton Bell should perforce be mixed up with his proceedings. My sister Anne wishes me to say that should she ever write another work, Mr. Smith will certainly have the first offer of the copyright.

I hope Mrs. Williams’s health is more satisfactory than when you last wrote. With every good wish to yourself and your family, Believe me, my dear sir, yours sincerely, C. BRONTË”

So what does this fascinating letter tell us? Charlotte believes that the purpose of writing above all is to tell the truth, which is a view shared completely by her sister Anne; we know this from Anne Brontë’s preface to the second edition of The Tenant Of Wildfell Hall in which she writes: “I wished to tell the truth, for truth always conveys its own moral to those who are able to receive it”. Even before that, in Agnes Grey Anne, writing as Agnes (a largely semi-autobiographical heroine) opens the novel with the following five words: “All true histories contain instruction.”

Perhaps the most fascinating aspect of the letter is Charlotte’s stout and wholehearted defence of the character of Edward Rochester. He is a protagonist who divides opinion today (much as Heathcliff does, to be fair) – to some he is a romantic hero, to others a villain who uses and discards women. It is clear, however, that Charlotte herself intended him to be seen as a heroic figure – just as she herself saw the man who inspired Rochester: her unrequited love from Brussels, Monsieur Constantin Heger.

We also see that Thomas Newby, publisher of Anne and Emily Brontë, is up to his old duplicitous tricks including arguments conducted through the letters pages of newspapers. Charlotte makes clear that Anne has decided to publish future books with Smith, Elder – but alas, of course, tuberculosis would all too soon ensure that there were no future books from her. It’s interesting, however, that Charlotte makes no such claim for Emily – whilst Williams had met Anne but had not met Emily, he was aware of Emily’s existence and that it was she who wrote under the name of Ellis Bell. Perhaps this is another indication, then, that Emily Brontë had no intention of writing another novel after Wuthering Heights?

Charlotte Brontë was a brilliant, fascinating letter writer, so I hope you enjoy delving into her letters as much as I do: they give us a real insight into the mind of this genius within a family of genii. I hope you are bearing up in this heatwave and that you can join me next week for another new Brontë blog post.