On this Father’s Day our minds turn, as far as the Brontë story is concerned at least, to Patrick Brontë. A lot has been said and written about Patrick Brontë, which we’ll briefly look at in a moment, but he also had a playful side, and there can be no doubt that love for his children was the primary concern in his life. This is demonstrated in a rather unique letter he sent to his daughter Charlotte from an unexpected source: her dog.

Patrick Brontë had what was surely the misfortune of outliving his wife and all six of his children. That was an onerous fate, as Charlotte Brontë acknowledged after choosing to have youngest sister Anne Brontë buried in Scarborough rather than returning to Haworth with her body. In a letter of 4th June, less than a week after her sister’s passing, she wrote: ‘For the present Anne’s ashes rest apart from the others – I have buried her here at Scarbro’ to save papa the anguish of a return and a third funeral [within a year].’

Charlotte could not have known that there was yet one more funeral that her father would have to endure – that of his final child, Charlotte herself, six years later. In many ways, Patrick’s long life was punctuated by moments of intense sorrow, and yet I think if one word sums him up it is this: duty.

Patrick did his duty by Haworth and the church: serving as its minister for over 40 years, even when blind and in ill health. His final marriage ceremony was carried out towards the close of his life and ministry, and was recalled in 1900 by the groom Richard Briggs: ‘At that time Mr Brontë was childless, blind, and feeble; and the bride and bridegroom had to wait in the vestry for three hours on a Shrove Tuesday morning before the venerable clergyman, then over eighty years of age, was seen coming along the path from the parsonage, supported on one side by his son-in-law, Mr Nicholls, and on the other by the faithful servant of the family, Martha Brown. Mr Brontë recited the marriage ceremony from memory, and at the close, kneeling with the communion rail, he offered a brief extempore prayer, invoking the Divine blessing on the young couple.’

Patrick took a deep interest in the life of his parishioners, especially when it came to their education. He had risen from very humble beginnings thanks to an education at Cambridge paid for largely by his mentor Thomas Tighe, and wherever he went in his life as a minister he insisted on church schools being opened to provide at least a rudimentary education to working class children. Patrick was also instrumental in the building of reservoirs near Haworth and improvements in sanitation to the village, acts which saved tens of thousands of lives in the decades which followed. Above all, he believed in fairness and equality, and it was this that led him to allow his daughters to read books which would normally have been forbidden them: works by writers such as Byron and Shelley. This enlightened attitude did much to open the minds and potential of the Brontë sisters: something we can all be grateful for.

Another influence can clearly be seen in his love of walking and poetry: two traits that Emily Brontë in particular took to her heart; little wonder that it was Emily of whom Patrick said: ‘she is a brave and noble girl. She is my right-hand, nay the very apple of my eye!’ Incidentally, it’s Emily’s drawing of Flossy in full flight which heads this post, and she sketched him again in the drawing below.

Patrick’s life was a serious one, one of service and duty, but he also had a playful side and nowhere is this more evident than in a letter that he wrote at some date before the 19th of January 1853. The letter was sent to Charlotte Brontë, at the time on a visit to London, and contained a letter from Flossy: the spaniel who had originally been the pet of Anne Brontë, after being given to her by her Thorp Green charges the Robinson girls. Flossy was now ageing, and his original owner Anne was long gone, but he still found time (with a little help from Patrick) to write the following letter to new owner Charlotte: 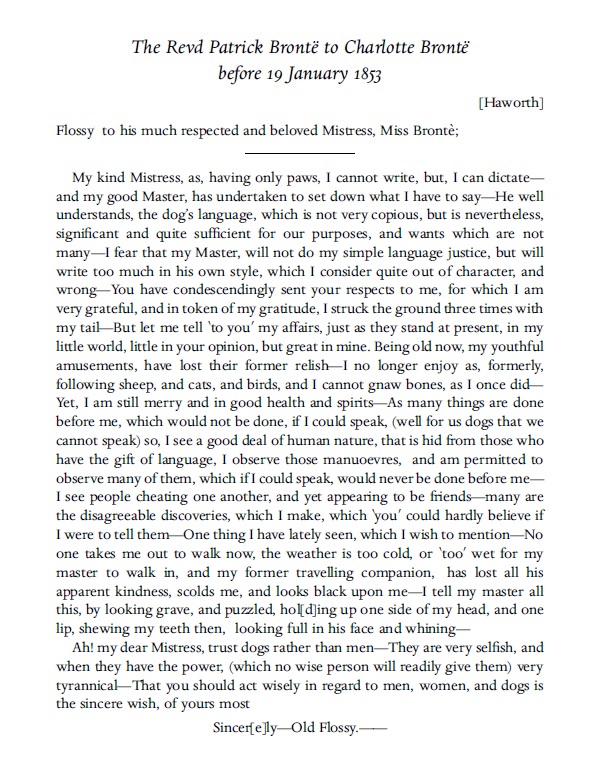 A playful letter which is in some ways reminiscent of a poem that William Cowper, a poetic hero of the Brontës and Anne in particular, once composed as if written by his own pet spaniel Beau. It does, however, have a serious message, which shows that even in such a frivolous mood, Patrick’s concern for his children was never far away. The manuscript of the letter contains a handwritten note added by Ellen Nussey, into whose hands it came after Charlotte’s death. Ellen has written, rather sagaciously: ‘Written to C. in The Dog’s name—Mr. B. dare not encounter again face to face C’s sense of justice & Godly integrity—so he took this method of undermining Mr N.’

This letter dates from the month succeeding Arthur Bell Nicholls’ failed proposal to Charlotte Brontë. Patrick Brontë was furious that his assistant curate had proposed to his daughter, clearly thinking the match unworthy of his by then successful, and increasingly wealthy, daughter. We know that he expressed this anger to Arthur, and to Charlotte, but from Ellen’s note we get a clue that Charlotte, who also had a fine temper when roused, had verbally fought back on Arthur’s behalf. Patrick dare not broach the subject to his daughter again, in his own name, but perhaps his daughter would heed the advice of her dog Flossy?

The former travelling partner who Flossy laments now fails to take him for a walk is in fact Arthur Bell Nicholls, who in his love for Charlotte had taken it upon himself to be chief dog walker. It is not hard, therefore, to understand the true message of Flossy’s closing warning: ‘Ah! my dear Mistress, trust dogs rather than men – They are very selfish, and when they have the power, (which no wise person will readily give them) very tyrannical.’

Whether you’re a father, celebrating a father, or missing a father, I hope this Sunday goes as well for you as it can, and I hope you can join me next Sunday for another new Brontë blog post. Woof!

One thought on “Patrick Brontë’s Letter From Flossy To Charlotte”