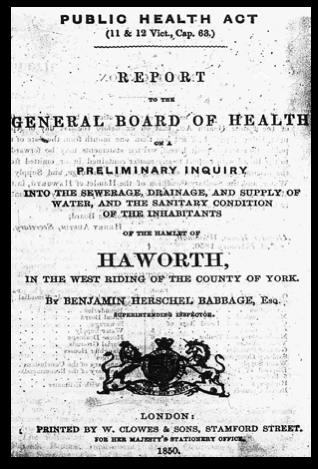 The 22nd of March is World Water Day; it sounds like a joke but it’s far from funny. One in three people around the world have no access to a toilet or clean water, and that has an incredible impact on the health and prospects of more than 1.8 billion people who are put in danger of contracting cholera, typhoid, polio and more. It’s a huge problem in the developing world today, but it was also a huge problem in the Haworth of Anne Brontë and her sisters.

Haworth today is a beautiful tourist village, but in the 1840s it was very different. The industrial revolution had led to a massive expansion of Haworth, and that brought with it overcrowding, disease and very insanitary conditions. The lack of toilets, sanitation and fresh water led directly to the epidemics of typhoid and cholera that annually wiped out a huge percentage of the population. In fact, in 1838, when Anne was eighteen, the average age at death in Haworth was just 19.6 years.

Patrick Brontë, who was overworked simply from the non-stop funerals he had to hold, realised that sanitation was at the heart of the problems that had made Haworth the most unhealthy place in England outside of the London slums. He wrote repeatedly to the government, and at last in April 1850 a government inspector called Benjamin Herschel Babbage carried out an official inspection. He was shocked by what he found, and the results of his report, and Patrick’s persistence, were that Haworth gained a reservoir, a cleaner water supply and more toilets. It was a life saving transformation for the village, especially when you consider some of the astonishing facts contained in the Babbage Report into Haworth:

• There were 69 toilets for two and a half thousand people

• Seven houses had no access to a toilet at all

• There were eleven water pumps for the whole village, two were out of order

• There were no drains, and human and animal effluent ran down the sides of the steep street

These statistics are incredible, almost unbelievable, but true. It’s little wonder that Haworth became a place where people could sicken and die at any time. Anne Brontë and her family were lucky, as the Parsonage was one of only two buildings in the village with its own clean water supply, thanks to a nearby spring. We too are lucky who can take toilets, clean water, and sanitation for granted. One in three across the world are not so lucky, and yet, like Haworth after the Babbage report, things can change. Find out more, and maybe do your little bit to help, by visiting the World Water Day website. If Patrick Brontë had been alive today, we can be sure he would be a campaigner.

One thought on “Haworth Sanitation And The Babbage Report”