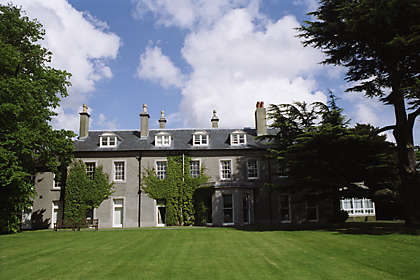 When Anne Brontë was writing her brace of great novels in the 1840s, she surely never imagined how many lives she would touch nearly two centuries later, how the power of her mind, the words she put onto a page, would bring pleasure to so many and make their days that much better.

Anne was acutely aware, however, of the opportunity to touch the lives of those she had close contact with – especially the charges that she was governess over. The children of the first family she served, the Inghams of Mirfield, were a lost cause. Barely educated and full of self-importance, they were, as Charlotte Brontë called them, ‘desperate little dunces.’The children of the second family Anne served were much more promising.

The Robinsons of Thorp Green Hall near York are depicted, with a little artistic license, as the Murrays of Agnes Grey, and while Anne finds fault with some of their behaviour she gives them a much more sympathetic portrayal than the Bloomfields who were based on the Inghams. They are most famous today because of Mrs Robinson, and the impact that she had upon Branwell after Anne obtained him a job at Thorp Green Hall. It was a disastrous move, but then when a young man falls for a middle aged woman named Mrs Robinson things are surely going to graduate!

We know, then, the impact the Robinsons had on the Brontës, but what impact did Anne Brontë have on the Robinsons? We can judge this both through clues within Agnes Grey, and by looking at what happened to the Robinsons after Anne Brontë left her post with them.

Anne Brontë spent five years as governess to the Robinson family, from 1840 until 1845, meaning that she held down a job for far longer than any of her siblings. This gave her time to teach the children, Lydia junior, Elizabeth and Mary, the things that she believed really mattered: honesty, truth and respect for themselves and others. These lessons may have taken a while to sink in, but it is clear that the Robinson girls really grew to love Anne, seeing her almost as a mother figure, even though she was in fact only a few years older than them. An indication as to why they liked her so much is given at the end of Chapter 7 of Agnes Grey. It is a strange end to the chapter, as it bears no relation to what comes before or after, and there is no indication of who is speaking. In truth, these are the words that Anne had heard the Robinson girls say about her:

‘Miss Grey was a queer creature. She never flattered, and did not praise them half enough; but whenever she did speak favourably of them, or anything belonging to them, they could be quite sure her approbation was sincere. She was very obliging, quiet, and peaceable in the main, but there were some things that put her out of temper: they did not care much for that, to be sure, but still it was better to keep her in tune; as when she was in a good humour she would talk to them, and be very agreeable and amusing sometimes, in her way; which was quite different to mamma’s, but still very well for a change. She had her own opinions on every subject, and kept steadily to them – very tiresome opinions they often were; as she was always thinking of what was right and what was wrong, and had a strange reverence for matters connected with religion, and an unaccountable liking to good people.’

Anne was the first person to instil discipline into the girls lives, and they grew to appreciate this as a great treasure. It was this respect that led the girls to buy Anne a very special gift – the cavalier spaniel puppy that she named Flossy. The girls must have been distraught when Anne left suddenly in the summer of 1845, but this was far from the end of her involvement in their lives.

One of the themes relating to the Bloomfield section of Agnes Grey is the importance of love in marriage. The Robinsons were a wealthy and well connected family, and Mrs Robinson tried to arrange exalted marriages for them based upon social standing rather than upon any idea of romance or partiality. This was perfectly normal for the time, but to Anne it was anathema. We hear from Charlotte how the Robinsons would write to Anne with their problems and worries, and she would write back offering them advice. This continued until the end of Anne’s life, as two of the girls Elizabeth (known as Bessie) and Mary made an arduous journey to see Anne in Haworth in December of 1848. Charlotte was amazed at the obvious love and respect between the girls and Anne, writing of it to Ellen Nussey:

‘The Robinsons were here about a week ago – they are attractive and stylish looking girls – they seemed overjoyed to see Anne; when I went into the room they were clinging around her like two little children – she, meantime, looking perfectly quiet and passive. Their manners evinced more levity and giddiness than pretension or pomposity.’

It should be noted that the oldest child, Lydia, did not make the journey, but by this time she had broken off contact with her mother of the same name, and perhaps we can see Anne’s hand in this event too. The young Lydia travelled to the fashionable resort of Scarborough every year, and Anne went along with them. It was a place to see and be seen for Lydia, and it was hoped and expected that she would pick up a suitably wealthy husband. Lydia had other plans. She fell in love with Henry Roxby, a circus and stage performer whose father Robert, a comedian and performer himself, owned Scarborough’s Theatre Royal. It seems reasonable, in light of the letters her sisters sent, to presume that Lydia opened up to Anne about her feelings. There is no doubt that Anne would have impressed upon her the importance of following her heart and marrying for love, just as Agnes Grey does to the oldest Bloomfield girl in Anne’s first novel. One night, Lydia Robinson and Henry Roxby eloped and married.

Mrs Robinson was outraged, and her eldest daughter became a persona non grata. She now turned her eyes onto her next child Bessie Robinson, and arranged a marriage to a rich mill owner named Milner. Bessie wrote despairingly to Anne, and we can be certain that Anne implored her to be firm with her mother, to follow her heart just as her eldest sister had.

An emboldened Bessie protested fiercely to her mother, and the engagement was broken off. It was a scandal that went to court, and Lydia Robinson had to pay substantial compensation of £90 (around ten thousand pounds today) to the Milners. When Bessie did marry it was to the factory owner William Jessop of Butterley Hall in Ripley, Derbyshire (that’s it at the top of this post). Anne’s influence could be seen here as well, as Bessie Jessop became known for her compassion and kindness to the poor. Every year she invited 200 local people to tea at Christmas, and gave them a shilling each. When she died in 1882 she left the equivalent of over two million pounds to her own daughters, and the local paper reported that ‘the poor people of Ripley had lost a true friend’. Factories closed for the day, and flags flew at half mast.

This was the true measure of Anne Brontë as a person. She is loved by us today from a distance, we see her through a glass darkly and still we are impressed, but to those who knew her closely she was adored. Anne Brontë gave Lydia and Bessie Robinson the courage to be true to themselves, to do what they knew was right rather than what was expected of them. It is a lesson we can all learn from today.