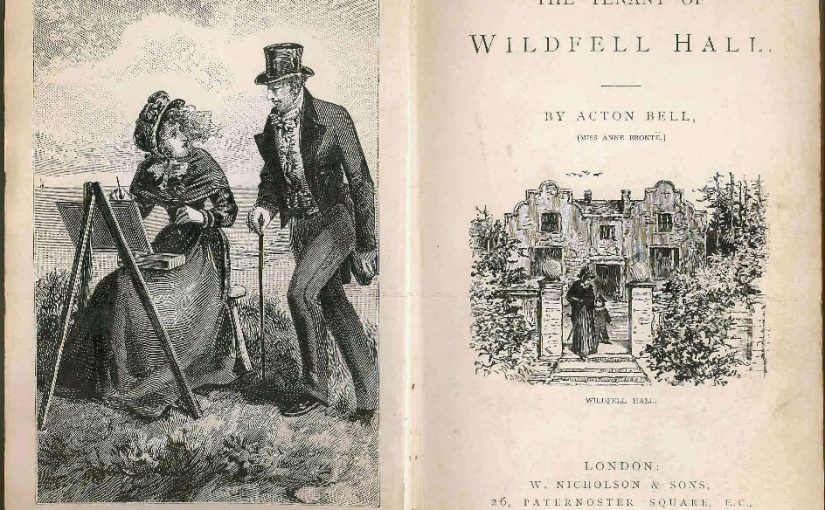 Anne Brontë’s second novel, ‘The Tenant Of Wildfell Hall‘, was published by Thomas Cautley Newby in late June 1848, and it proved an instant and huge success. Most people today would be surprised to hear that it sold even faster than her sister’s ‘Jane Eyre‘ of the previous year, and within six weeks a second edition was already being printed and distributed.

In this short interlude, reviews for the book were already appearing, and whilst many acknowledged the force and power of the novel, others condemned it as a book unworthy of being published. Examples of this include The Rambler’s assertion that, ‘the scenes which the heroine relates in her diary are of the most disgusting and revolting species’ and that it was, ‘one of the coarsest books which we have ever perused.’ Coarseness was a common theme in reviews of Anne’s novel as Sharpe’s London Magazine railed against, ‘profane expressions, inconceivably coarse language, and revolting scenes and descriptions by which its pages are disfigured’ and The Spectator warned readers of Acton Bell‘s ‘morbid love of the coarse, not to say of the brutal.’

Coarseness and brutality are far removed from Anne Brontë’s character, and far removed from the true nature of this brilliant novel. Anne’s intention in her book was to entertain, yes, but primarily to educate, and we have the proof of this in her brilliant preface to the second edition of ‘The Tenant Of Wildfell Hall’. Some still think of Anne as meek and mild, but in this preface she put her critics to the sword and stood up for what she believed in above all other things – the truth. I leave you now with the full text of Anne Brontë’s preface, as powerful and revealing today as it was when it was published in mid-August 1848:

“WHILE I acknowledge the success of the present work to have been greater than I anticipated, and the praises it has elicited from a few kind critics to have been greater than it deserved, I must also admit that from some other quarters it has been censured with an asperity which I was as little prepared to expect, and which my judgement as well as my feelings, assures me is more bitter than just. It is scarcely the province of an author to refute the arguments of his censors and vindicate his own productions, but I may be allowed to make here a few observations with which I would have prefaced the first edition, had I foreseen the necessity of such precautions against the misapprehensions of those who would read it with a prejudiced mind or be content to judge it by a hasty glance.

My object in writing the following pages was not simply to amuse the Reader, neither was it to gratify my own taste, nor yet to ingratiate myself with the Press and the Public: I wished to tell the truth, for truth always conveys its own moral to those who are able to receive it. But as the priceless treasure too frequently hides at the bottom of a well, it needs some courage to dive for it, especially as he that does so will be likely to incur more scorn and obloquy for the mud and water into which he has ventured to plunge, than thanks for the jewel he procures; as, in like manner, she who undertakes the cleansing of a careless bachelor’s apartment will be liable to more abuse for the dust she raises than commendation for the clearance she effects. Let it not be imagined, however, that I consider myself competent to reform the errors and abuses of society, but only that I would fain contribute my humble quota towards so good an aim, and if I can gain the public ear at all, I would rather whisper a few wholesome truths therein than much soft nonsense.

As the story of ‘Agnes Grey’ was accused of extravagant over-colouring in those very parts that were carefully copied from the life, with a most scrupulous avoidance of all exaggeration, so, in the present work, I find myself censured for depicting con amore, with ‘a morbid love of the coarse, if not of the brutal,’ those scenes which, I will venture to say, have not been more painful for the most fastidious of my critics to read than they were for me to describe. I may have gone too far; in which case I shall be careful not to trouble myself or my readers in the same way again; but when we have to do with vice and vicious characters, I maintain it is better to depict them as they really are than as they would wish to appear. To represent a bad thing in its least offensive light is, doubtless, the most agreeable course for a writer of fiction to pursue; but is it the most honest, or the safest? Is it better to reveal the snares and pitfalls of life to the young and thoughtless traveller, or to cover them with branches and flowers? O Reader! if there were less of this delicate concealment of facts this whispering, ‘Peace, peace’ when there is no peace, there would be less of sin and misery to the young of both sexes who are left to wring their bitter knowledge from experience.

I would not be understood to suppose that the proceedings of the unhappy scapegrace, with his few profligate companions I have here introduced, are a specimen of the common practices of society the case is an extreme one, as I trusted none would fail to perceive; but I know that such characters do exist, and if I have warned one rash youth from following in their steps, or prevented one thoughtless girl from falling into the very natural error of my heroine, the book has not been written in vain. But, at the same time, if any honest reader shall have derived more pain than pleasure from its perusal, and have closed the last volume with a disagreeable impression on his mind, I humbly crave his pardon, for such was far from my intention; and I will endeavour to do better another time, for I love to give innocent pleasure. Yet, be it understood, I shall not limit my ambition to this or even to producing a perfect work of art: time and talents so spent, I should consider wasted and misapplied. Such humble talents as God has given me I will endeavour to put to their greatest use; if I am able to amuse, I will try to benefit too; and when I feel it my duty to speak an unpalatable truth, with the help of God, I will speak it, though it be to the prejudice of my name and to the detriment of my reader’s immediate pleasure as well as my own.

One word more, and I have done. Respecting the author’s identity, I would have it to be distinctly understood that Acton Bell is neither Currer nor Ellis Bell, and therefore let not his faults be attributed to them. As to whether the name be real or fictitious, it cannot greatly signify to those who know him only by his works. As little, I should think, can it matter whether the writer so designated is a man, or a woman, as one or two of my critics profess to have discovered. I take the imputation in good part, as a compliment to the just delineation of my female characters; and though I am bound to attribute much of the severity of my censors to this suspicion, I make no effort to refute it, because, in my own mind, I am satisfied that if a book is a good one, it is so