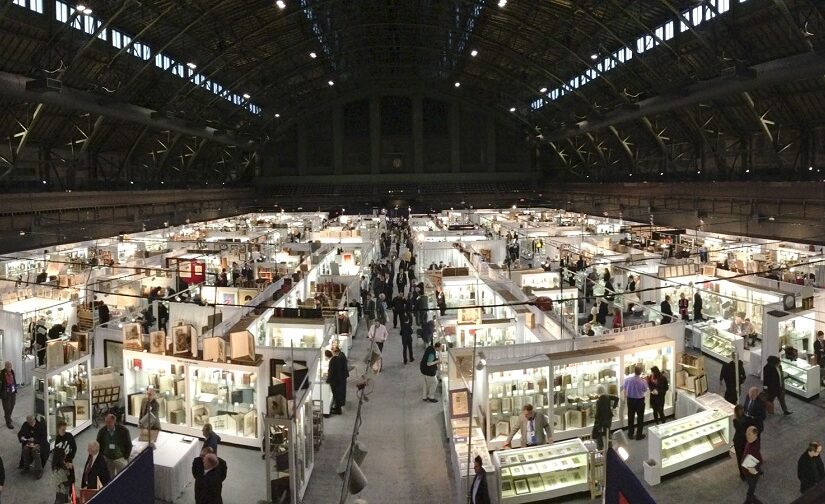 This week marked a very sad anniversary in the Brontë story, the death of Charlotte Brontë on 31st March 1855. In some ways it marked the end of the Brontë sisters story, especially as Charlotte was pregnant at the time meaning that her tragic end precluded future generations of this brilliant family we all love. In other ways, however, their story is very much alive, as we saw this week with the discover of ‘A Book Of Rhymes’. We’re going to look at this discover, and this book, in today’s post.

The story of the tiny Brontë books, the Brontë juvenilia, is one that has been told many times before, but it’s certainly a fascinating one. Inspired by the gift of twelve toy soldiers from Patrick Brontë to his son Branwell the siblings began to invent and act out stories, which eventually evolved into written stories and poems about the imaginary lands of Glass Town and (later) Angria. Later still, Emily and Anne Brontë composed stories of the kingdom of Gondal, an obsession which remained with Emily Brontë throughout her life.

These stories were captured in tiny little books which can only be read today with the use of a powerful magnifying glass. Why was the writing so tiny? It is thought this was so the toy soldiers could read them, but it also meant that their short-sighted father couldn’t. The pages were bound together between hand stitched covers made by the sisters, and alongside the stories and verse are humorous adverts and asides. Some other 19th century writers, notably Ruskin, also created tiny books in their youth, but none of their productions are touched with the humour, excitement and seeds of genius so evident in the Brontë marvels.

Marvel is perhaps a good word to use; when I tweeted about the recent discovery (which we’re coming to, patience dear reader) it caused a stir and received several thousand likes and shares. One man responded with, ‘the Brontës wrote zines!’ and I think that’s a rather nice, and very good, way to look at it. The young siblings were really doing what children ever since, children today, love to do: creating their own comics or ‘zines; and they were very good at it.

So, onto ‘A Book Of Rhymes’. The first thing we should say, seeing that a discovery has been heralded, is that it had been thought lost for over a hundred years. The news was first broke by Jennifer Schuessler of the New York Times earlier this week, and I’m thankful to that publication for the images of the book which appear below.

The existence of this book had been documented by Elizabeth Gaskell in her biography of her friend The Life Of Charlotte Brontë. In chapter five of this book, Gaskell talks of having ‘had a curious packet confided to me [it was given her by Ellen Nussey], containing an immense amount of manuscript, in an inconceivably small space… written principally by Charlotte, in a hand which it is almost impossible to decipher without the aid of a magnifying glass… Among these papers, there is list of her works, which I copy, as a curious proof of how early the rage for literature composition had seized upon her:’

Following in Elizabeth’s footsteps, I too now produce that list: 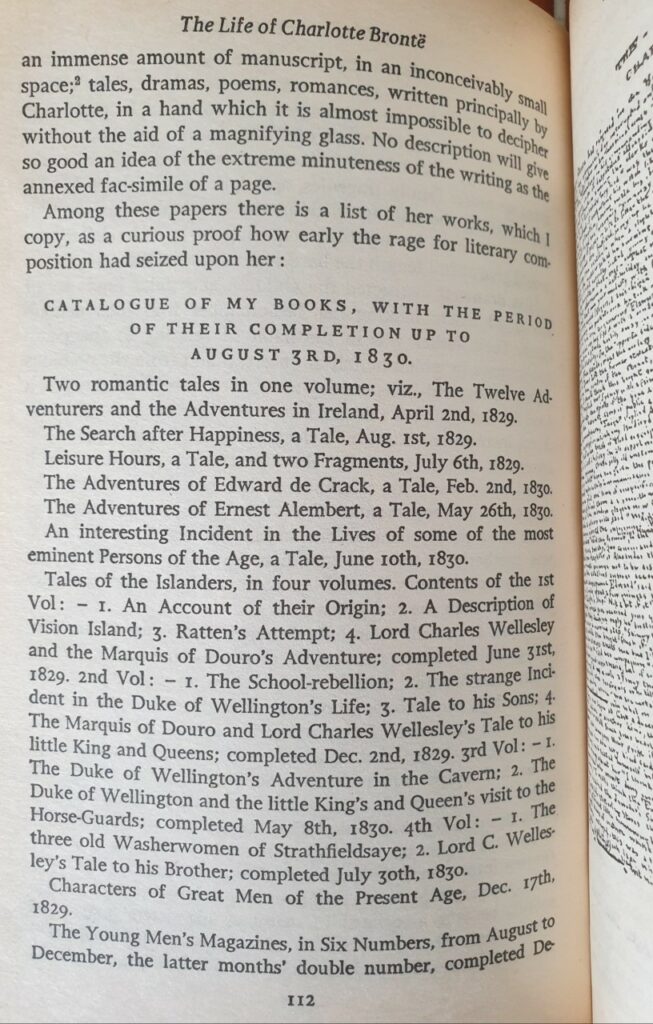 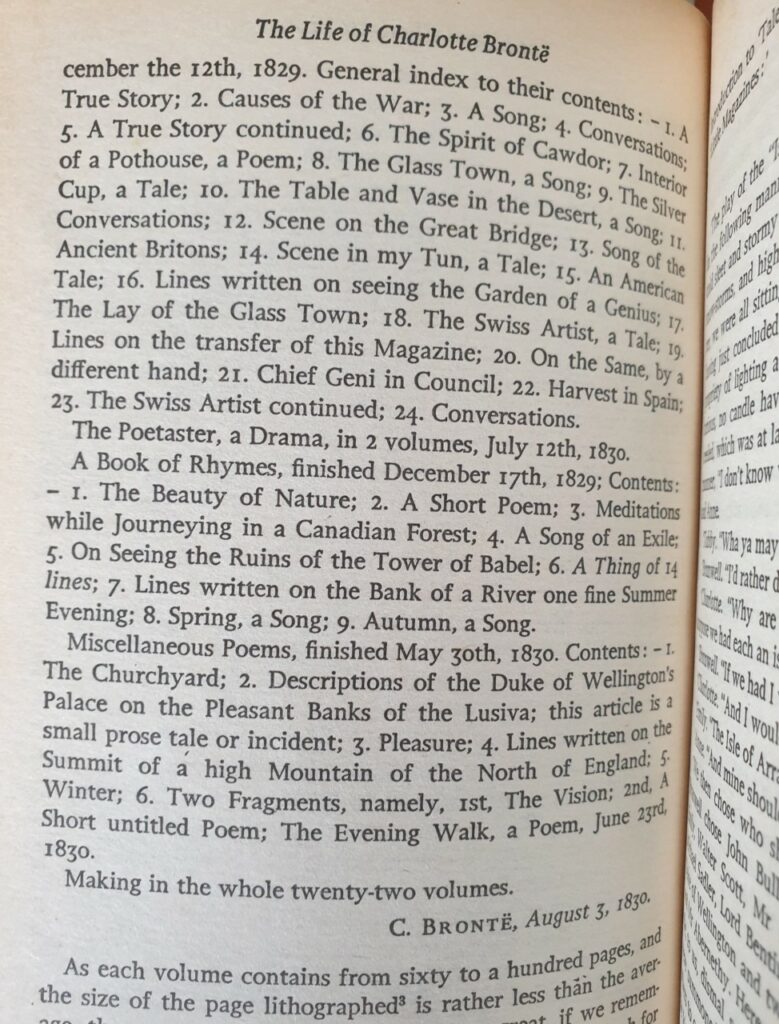 So there we have it, ‘A Book Of Rhymes’ containing ten poems with many an intriguing title, but if you head to our old friend Google and look for ‘Meditations while Journeying in a Canadian Forest’ or head to a museum to read ‘A Song of an Exile’ you won’t find a single word. Unlike much of the Brontë juvenilia the actual content of this book written by a 13 year old Charlotte Brontë remains untranscribed and unknown.

The last known sighting of this book was in 1916 when it sold in an auction in New York for $520 to a private collector who bid and won anonymously. As nothing was heard of it in the succeeding century it had been thought lost or destroyed (the books are very fragile, after all), until an envelope was found recently, by persons undisclosed, within a 19th century schoolbook. The envelope was marked ‘Brontë manuscript’ with the addition of ‘most valuable’ for good, and sensible, measure. Once opened a tiny hand stitched book of 16 pages was found which contained 10 poems of which the author acknowledges, ‘the following are attempts at rhyming of an inferior nature it must be acknowledged but they are nevertheless my best’. After 106 years ‘A Book Of Rhymes’ had risen like a phoenix, and what a valuable bird it is.

What happened next is a sign of the incredible inflationary effect that Brontë works and relics have had, and a tribute to the life that the Brontës now enjoy: the truth is that Charlotte and her sisters will never really die, for as long as this watery planet turns and as long as humans are still around to read (for however much the world changes humans will always want to read), they will be reading the works of the Brontës.

On the first page of her tiny book, 13 year old Charlotte has penned, ‘A Book Of Rhymes by Charlotte Brontë, sold by nobody and printed by herself’. They were not to remain ‘sold by nobody’. As we have seen, they were sold in New York in 1916 for $520 – that equated to approximately £109 at the time. There is a record of it being sold in England just two years earlier, as reported here by The Yorkshire Post (it’s a pity that Yorkshire’s leading newspaper couldn’t spell Haworth correctly, but that’s another matter):

We learn now that this tiny book, along with many others, had been in the treasured collection of Charlotte’s widower Arthur Bell Nicholls in Ireland. They have been auctioned after his death, and singled out for especial notice in the article is ‘A Book Of Rhymes’. It has been bought by a Mr Maggs for £34. For whatever reason, this Mr Maggs did not give the book to the Brontë Society as many purchasers did, but instead put it up for sale again two years later in the Unite States, where he quickly tripled his money.

It has to be pointed out that even these sums were not the insignificant amounts they may seem. If we eschew purely inflationary calculations and instead turn to measuringworth.com to get a true representation of how much the sums were worth we find that $520 or £109 in 1916 is worth between 34 and 67 thousand pounds today. Nevertheless, the Brontë magic has made that figure seem a pittance.

The book is now in the experienced hands of James Cummins Booksellers of Manhattan and will be put up for sale at the New York International Antiquarian Book Fair on April 21st ( a previous year’s fair is at the head of this page). It’s asking price is a cool 1.25 million dollars – just over £953,000 at today’s exchange rate. It’s time to dip into our pockets again – after all for that price we can have this magnificent piece of Brontë history or ten litres of petrol.

In all seriousness what has made this particular book, a slim volume compared to much of the Brontë juvenilia, so incredibly valuable? The rules of supply and demand are playing their part. Unlike items in the Honresfield Library sale the contents of these pages remain completely unknown – and people are desperate to know what is on those tiny pages covered with minuscule writing.

What happens next? The book fair is only three weeks away, there is no time for institutions to raise funds and can we expect Leonard Blavatnik to make yet another brilliant, generous gesture so soon after he helped secure the Honresfield collection for the nation? At this stage it seems likely it will once again pass to an anonymous, private bidder – the best we can hope for is that they then place scans or transcriptions of the work into the public domain. That could all change however; hope springs eternal, and I hope to speak to James Cummins Booksellers on this issue, so watch this space!

In the meantime, I hope you are enjoying a happy, healthy start to April. I will see you again next week for another new Brontë blog post.

One thought on “Brontë Discovery! A Book Of Rhymes Is Found”