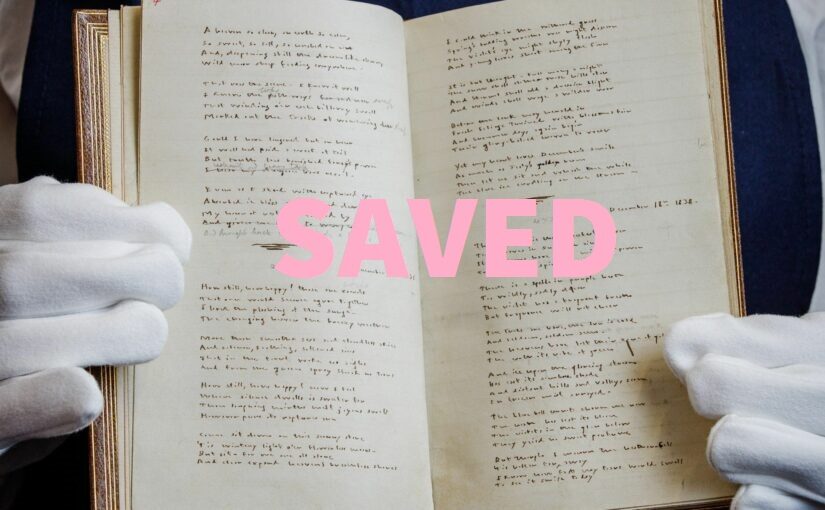 It’s a rare mid week blog post this week, because I’ve received some great Brontë-related news that I just had to share with you all. I’ve been under strict instructions to keep this under wraps until noon today, but I can finally reveal that the Honresfield Library collection has been saved for the nation!

You may remember that this collection was once the domain of the Law brothers of Honresfield House in Lancashire. They amassed a huge collection of literary treasures, at the heart of which were Brontë manuscripts in all shapes and sizes. Earlier this year Sotheby’s announced that the entire collection would be sold – leading to the very real prospect that they would enter private collections or bank vaults never to be seen again. Thanks to hard work by many organisations and people this has now been averted once and for all. Here’s a press release from Friends Of The National Libraries: 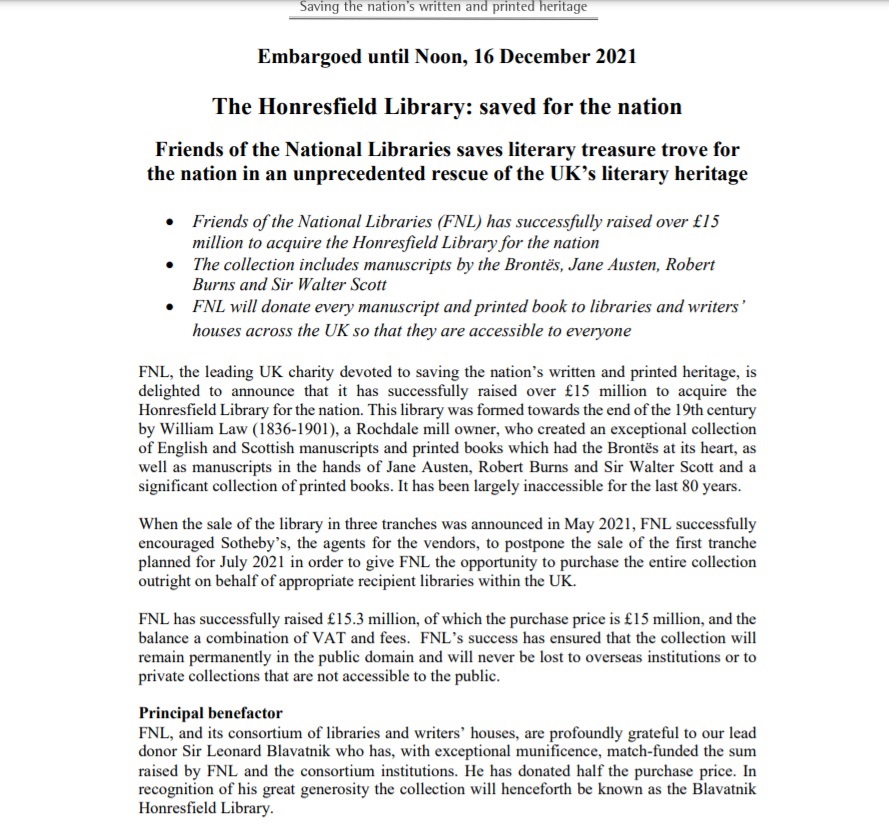 In short – these incredible literary treasures (I’ve added pictures of just a short selection from the Laws’ collection) are saved for the nation, and they are now safe forever. Not only are they saved, they will be put on display and available for public view in perpetuity. Further details of that will be announced in full course, but the Brontë related material will be shared between three very deserving organisations: the Brontë Parsonage Museum, the British Library and the Brotherton Library of the University of Leeds (rather fittingly, as Brotherton, like the Laws, was a self-made Lancashire-born industrialist with a huge passion for collecting Brontë material).

The patron of Friends Of The National Libraries has expressed his delight. HRH Prince Charles, the Prince of Wales, said: “It is tremendous news for our country that Friends of the National Libraries, a charity of which I am proud to be Patron, has raised £15 million in just five months to save one of the most significant collections, including manuscripts by Charlotte Brontë, Walter Scott and Robert Burns. I can only congratulate the Chairman, Geordie Greig, and his team for saving the Blavatnik Honresfield Library for the nation, with its treasures now to be owned by some of our greatest national libraries across the U.K. Our literary heritage is our cultural D.N.A. and this preserves it for students, teachers, academics and ordinary readers in perpetuity.”

You may have noticed that the collection has a new name – it’s no longer the Honresfield Library but the Blavatnik Honresfield Library. A deserving tribute, as one man in particular has made a huge contribution to this happy outcome. Sir Leonard Blavatnik agreed to match all other funding raised to ensure that the appeal reached whatever target was needed; to this end, he personally has given over seven and a half million pounds so that these items can be saved for the nation, and by extension for literature lovers across the world.

So what will we soon be able to see? Well, we have Emily and Anne Brontë’s 1841 diary paper, a collection of Brontë little books, letters from Branwell Brontë to Hartley Coleridge, and a huge treasure: Emily Brontë’s secret poetry manuscript which inspired the Brontë sisters to seek a publisher for their work. It’s surely one of the most important handwritten literary treasures in the world today – and until the auction was announced it had been thought lost for over 80 years.

Our beloved Brontës are at the centre of the collection, but that’s by no means all that’s being saved. We also have, amongst other things, the handwritten manuscript of Rob Roy by Sir Walter Scott. That would please Charlotte Brontë who famously declared in a letter to Ellen Nussey: ‘For Fiction – read Scott alone, all novels after his are worthless.’

We also have the first English edition of Don Quixote, dating from 1620, and a collection of poetry by Robbie Burns – a great favourite of Anne Brontë. Perhaps most importantly, alongside Emily’s poetry, is a letter written from one sister to another – but this time we’re talking not of the Brontë sisters but the Austen sisters.

In January 1796 Jane Austen wrote to Cassandra Austen about a ball she was due to attend – and at which she was expecting a proposal from the love of her life, Tom Lefroy. This is not only a letter of great significance in Jane’s life, it is also the earliest letter of Jane Austen which is known to exist. It’s a particularly appropriate date for this letter to be saved, as today marks the 246th anniversary of the birth of Jane Austen.

I find this whole news very moving, and it’s great news towards the end of what has been a very trying year for us all. Alongside Sir Leonard Blavatnik, other philanthropists such as the Vogel-Denebeim family and big cultural institutions, this announcement has been made possible because of the time and money given by huge numbers of ordinary people like you and I – and out of adversity has come triumph.

The Brontës and the Taylors of Gomersal
Jane Eyre, The 1983 TV Adaptation
Love And Marriage In The Brontë Novels

3 thoughts on “Honresfield Library Saved For The Nation!”