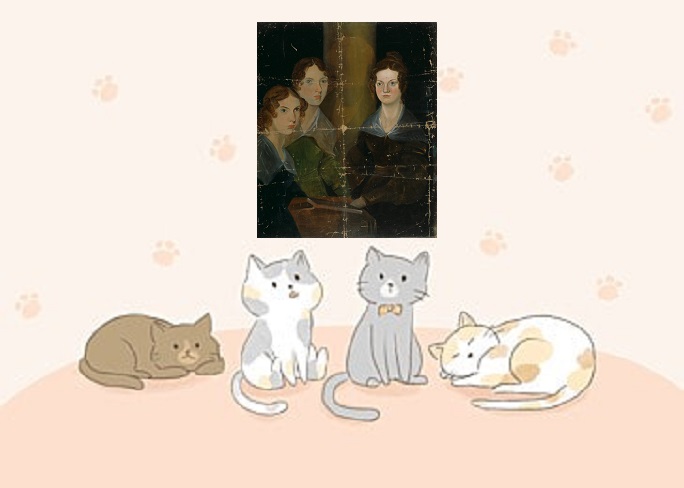 This week has seen two special Brontë anniversaries, and one special event for myself – one that I’m sure the Brontës would have approved of for one simple reason: it’s related to cats. The Brontës loved animals of all kinds (although Charlotte had a phobia about wild animals) so in today’s post we’re going to look at the Brontës and cats.

Before we head over to look at our four-legged friends let’s take a brief look at the two Brontë anniversaries I mentioned a moment ago. In fact, they both fell on the same date (in different years) and they both relate to the genesis of the Brontës as writers. 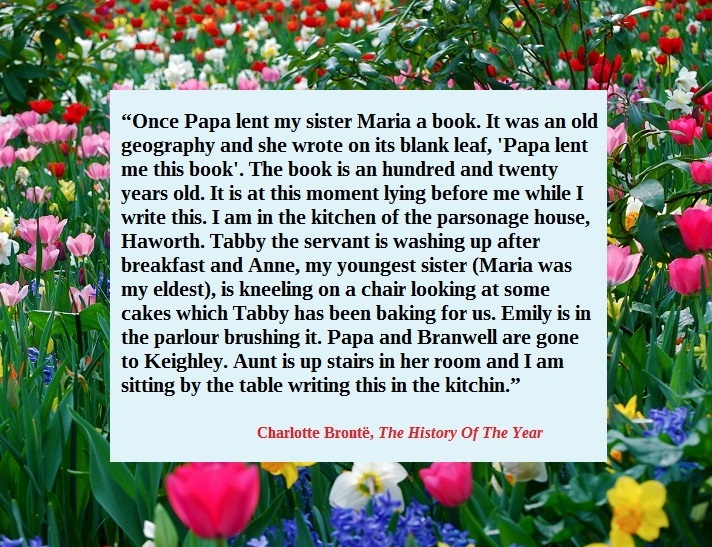 It was on the 12th of March 1829 that Charlotte Brontë wrote The History Of The Year. In it, a 12 year old Charlotte gave us a glimpse into the lives of the Brontës of Haworth Parsonage, and a fascinating glimpse it is too. Despite her young age, and a spelling error or two typical of youthful writing, it is full of hope and pathos, of dreams and losses. In short, it gives us a glimpse into the everyday life of the Brontë siblings at this time like nothing else.

The short account opens with the news that once an old geography book had been presented to Charlotte’s sister Maria. Charlotte has the book open in front of her as she writes, but it soon becomes clear that Maria is no longer there to read it herself: ‘Anne, my youngest sister, Maria was my eldest.’ That sad word ‘was’ references the fact that Maria, along with Elizabeth Brontë, had died four years earlier.

By the close of the account of the year 1829 we read that the Brontë siblings, especially Charlotte and Emily, are now creating their own stories and we hear details of the plays that they were writing and enacting. It captures the moment when the young Brontës had ventured into the world of creativity, of writing, and we get a clue as to the progress of that endeavour exactly eight years later. It was on the 12th of March 1837 that the then 20 year old Charlotte received a letter from poet laureate Robert Southey. He stated categorically that the literature cannot and should not be the business of women, as their role in life was to be wives and mothers. 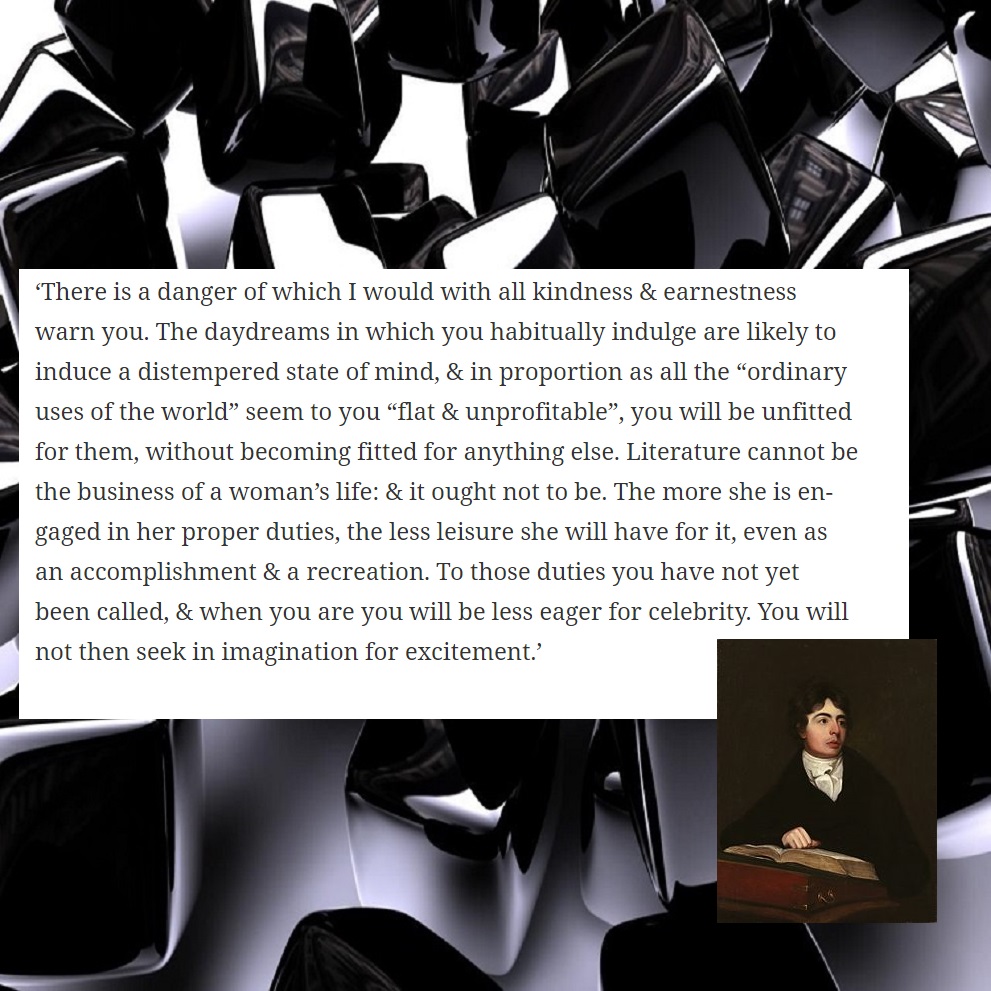 Southey was horrifically wrong, if a product of his age, and thankfully Charlotte, Emily and Anne would prove him spectacularly wrong. Nevertheless we see that in the eight years since Charlotte and Emily had commenced their secret ‘bed plays’ and had dreamt up stories about islands for their toy soldiers to populate, Charlotte is now writing poetry of such quality that even the stuffy poet laureate is replying to her about them. He had in fact, despite ruining the praise with his comments later in the letter, said, ‘You evidently possess & in no inconsiderable degree what Wordsworth calls “the faculty of verse”.’

By 1837 therefore Charlotte Brontë, followed closely by her younger sisters, was well on the path to literary success. Through all their trials and tribulations they found solace in each other and support from family, as well as love from another source: their pets. This brings me, rather clunkily perhaps, to my own special event. After many years of being a self-employed writer I have now re-entered the world of being an employee. I’ll still be writing and Brontë-ing, but I’ll also be working full time in a dream job that was too good to turn down: for The Sheffield Cats Shelter! 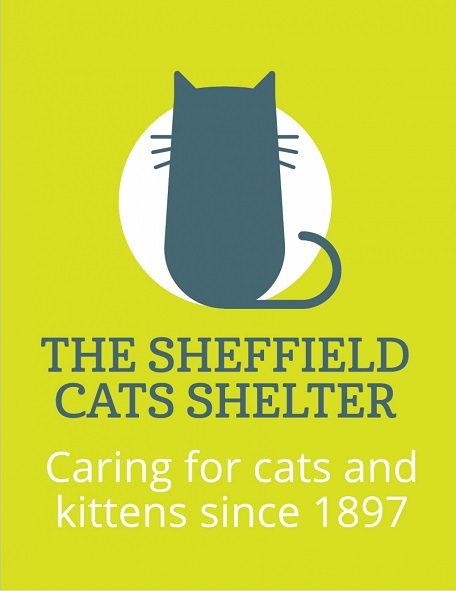 More on the wonderful Sheffield Cats Shelter later, but first let’s look at cats in the Brontë lives and works. We know that the Brontës had at least two cats (there may have been more that we just don’t have records of). Emily Brontë drew their ginger and white cat Tiger, although he is rather camouflaged against the flanks of her big mastiff Keeper. Keeper of course was renowned for his ferocity, so it’s lovely to see him sleeping gently beside Tiger the cat.

A striped cat was also the subject of Branwell Brontë’s earliest extant drawing – sketched in 1828, just one year before Charlotte recorded in her ‘history’! It seems likely that this was an earlier Brontë pet cat whose name is now unknown.

It’s clear that the Brontës loved all their pets, but according to close family friend Ellen Nussey there was one in particular that was loved by the Brontë children: their black cat named Tom. Here is Ellen’s account:

‘Black ‘Tom’, the tabby, was everybody’s favourite. It received such gentle treatment it seemed to have lost cat’s nature, and subsided into luxurious amiability and contentment. The Brontës’ love of dumb creatures made them very sensitive of the treatment bestowed upon them. For any one to offend in this respect was with them an infallible bad sign, and a blot on the disposition.’

Tom was much loved, and a love of cats can be found throughout the Brontë work, including in Charlotte Brontë’s Jane Eyre. Jane arrives at Thornfield Hall and is introduced to Mrs Fairfax:

‘A snug small room; a round table by a cheerful fire; an arm-chair high-backed and old-fashioned, wherein sat the neatest imaginable little elderly lady, in widow’s cap, black silk gown, and snowy muslin apron; exactly like what I had fancied Mrs. Fairfax, only less stately and milder looking. She was occupied in knitting; a large cat sat demurely at her feet; nothing in short was wanting to complete the beau-ideal of domestic comfort.’

For Charlotte, then, we see that at the heart of domestic perfection, the beautiful ideal, there has to be a cat. One Brontë in particular cherished a love of cats throughout her life: our own beloved Anne Brontë.

Anne’s début novel Agnes Grey contains frequent autobiographical hints, and it also reveals many of Anne’s own beliefs and opinions. Early in the novel Agnes, after the death of her father, has to leave home and seek out life as a governess; there is one parting which is particularly painful for our young heroine:

Spoiler alert ahead: Agnes eventually finds love with the saintly Reverend Weston (based on William Weightman) and one ineffable sign of his goodness is his love of cats, as parishioner Nancy related to Agnes:

‘“So I sat me down anent him. He was quite a stranger, you know, Miss Grey, and even younger nor Maister Hatfield, I believe; and I had thought him not so pleasant-looking as him, and rather a bit crossish, at first, to look at; but he spake so civil like – and when th’ cat, poor thing, jumped on to his knee, he only stroked her, and gave a bit of a smile: so I thought that was a good sign.”

Later on, Weston comes to the dramatic rescue of this very same cat:

‘But this time I was pretty sure of an hour or two to myself; for Matilda was preparing for a long ride, and Rosalie was dressing for a dinner-party at Lady Ashby’s: so I took the opportunity of repairing to the widow’s cottage, where I found her in some anxiety about her cat, which had been absent all day. I comforted her with as many anecdotes of that animal’s roving propensities as I could recollect. “I’m feared o’ th’ gamekeepers,” said she: “that’s all ’at I think on. If th’ young gentlemen had been at home, I should a’ thought they’d been setting their dogs at her, an’ worried her, poor thing, as they did many a poor thing’s cat; but I haven’t that to be feared on now.” Nancy’s eyes were better, but still far from well: she had been trying to make a Sunday shirt for her son, but told me she could only bear to do a little bit at it now and then, so that it progressed but slowly, though the poor lad wanted it sadly. So I proposed to help her a little, after I had read to her, for I had plenty of time that evening, and need not return till dusk. She thankfully accepted the offer.

“An’ you’ll be a bit o’ company for me too, Miss,” said she; “I like as I feel lonesome without my cat.” But when I had finished reading, and done the half of a seam, with Nancy’s capacious brass thimble fitted on to my finger by means of a roll of paper, I was disturbed by the entrance of Mr. Weston, with the identical cat in his arms. I now saw that he could smile, and very pleasantly too.

“I’ve done you a piece of good service, Nancy,” he began: then seeing me, he acknowledged my presence by a slight bow. I should have been invisible to Hatfield, or any other gentleman of those parts. “I’ve delivered your cat,” he continued, “from the hands, or rather the gun, of Mr. Murray’s gamekeeper.”

“God bless you, sir!” cried the grateful old woman, ready to weep for joy as she received her favourite from his arms.

“Take care of it,” said he, “and don’t let it go near the rabbit-warren, for the gamekeeper swears he’ll shoot it if he sees it there again: he would have done so to-day, if I had not been in time to stop him.”’

Weston was a cat lover and a cat rescuer, and in the eyes of Agnes, and the author Anne, there was no surer way of assessing a person’s worth. Talking of cat rescues that’s at the heart of what The Sheffield Cats Shelter does, which is why it really is a dream job for me (especially as I’m also in the company of beautiful cats and kittens all day).

The Sheffield Cats Shelter has a long history of being there for the cats of South Yorkshire. In fact, it’s 125 years old this year! The first shelter was opened in 1897 by the local cat-loving philanthropist Jane Barker (rather ironic that the woman whose legacy for cats is so huge should be called Barker, but then I suppose that Meower just isn’t a surname!). The shelter has since moved location a couple of times, but through world wars, social change and pandemics it has never stopped helping cats and kitties in need!

Today the shelter takes in cats in need of a loving new home, for a plethora of reasons, and we strive to find the perfect person to foster or adopt them. It’s a joyous moment when we see a cat start a new life with a new owner: a new life full of love and happiness for both of them. To continue to help cats for the next 125 years, and beyond, we need the help of the public. If you’re in the Sheffield area and can donate cat food, toys or goodies then our Travis Place shelter will be hugely grateful for them; alternatively monetary donations will always make a positive difference. You can find out more at the Sheffield Cats Shelter donations page, and I’m also placing a link on the side bar of this website. I know that there is so much happening in the world today, and so much pressure on our finances, but here is a brilliant cause where every single pound really does make a big difference. I’d be very grateful, our cats and kittens will certainly be very grateful, and I like to think that the Brontës would approve too!

I hope you can join me next week for another new Brontë blog post, and may your week ahead be a purr-fect one!