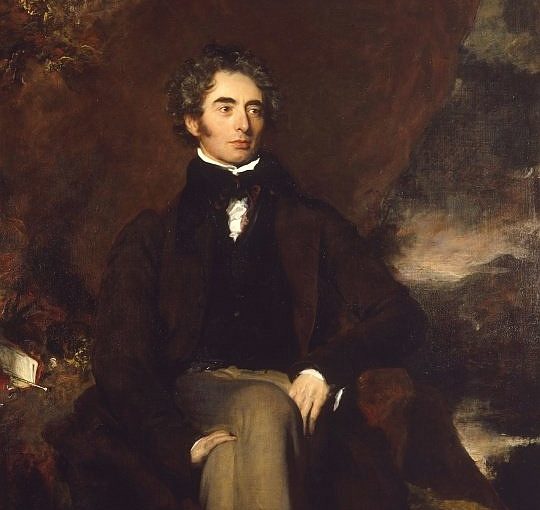 When Anne Brontë and her sisters Charlotte and Emily made their first foray into print, they decided to do so under the male pen names of Acton, Currer and Ellis Bell. Charlotte later said they took this decision as: ‘We did not like to declare ourselves women, because we had a vague impression that authoresses are liable to be looked on with prejudice.’

Perhaps the sisters were thinking back to one particular example of this when they made their decision, and one that involved one of the greatest literary figures of his day – Robert Southey.

Southey was born in Bristol in 1774, and was one of the leading figures of the Romantic era of poetry. He is most particularly associated with William Wordsworth and Samuel Taylor Coleridge as the three ‘Lake Poets’. He served as Poet Laureate for thirty years, from 1813 until his death in 1843 (when he was succeeded by Wordsworth).

The Brontë sisters had been writing poetry since a very early age. Their teenage poetry was often concentrated on the imaginary lands of Angria, created by Charlotte and Branwell, and Gondal, created by Anne and Emily Brontë. As they grew older, however, they began to write about the things that touched them in real life too: nature, love, despair.

Charlotte Brontë was never one to sit on her laurels, so she determined to seek an expert opinion on whether her poetry was good or not, and whether she should persevere with it. She turned to the top expert she could think of, the poet laureate Robert Southey.

We know that Charlotte wrote to Southey on 29 December 1836, when she was twenty years old and serving as a teacher at Roe Head School. Alas, we don’t have her original letter or the poem it contained within it, but we certainly have Southey’s reply, and it’s become infamous.

Southey starts by apologising for a three month delay in sending his reply, and then praises Charlotte’s work, saying that:

‘You evidently possess & in no inconsiderable degree what Wordsworth calls “the faculty of verse”. I am not depreciating it when I say that in these times it is not rare.’

Charlotte must have been delighted with this pronouncement, even though she would characteristically try to dampen her enthusiasm a little. It may also be seen as rather a generous judgement from the poet laureate: Charlotte is of course a brilliant novelist of the first order, but her poetry is often very long, and lacking the sparkle of the verse produced by Anne and especially by Emily.

It is later in the letter, however, that we reach the truly contentious point, as Southey counsels:

‘There is a danger of which I would with all kindness & earnestness warn you. The daydreams in which you habitually indulge are likely to induce a distempered state of mind, & in proportion as all the “ordinary uses of the world” seem to you “flat & unprofitable”, you will be unfitted for them, without becoming fitted for anything else. Literature cannot be the business of a woman’s life: & it ought not to be. The more she is engaged in her proper duties, the less leisure she will have for it, even as an accomplishment & a recreation. To those duties you have not yet been called, & when you are you will be less eager for celebrity. You will not then seek in imagination for excitement.’

Southey here is stating that once Charlotte marries, and after all marriage is the reason d’etre for a woman’s life, she will no longer want to write poetry: she will have all the excitement she needs in darning her husband’s socks, washing his clothes and cooking his meals.

There are a couple of other surprising things about this letter. One is that Southey says that he believes the writer has sent the letter under an assumed name, when in fact she had used her real name in contrast to her later actions as a writer. Perhaps most surprising of all, however, is Charlotte’s reaction to it – she was not angry, but elated.

Charlotte wrote straight back to Southey, saying: ‘I had not ventured to hope for such a reply; so considerate in its tone, so noble in its spirit. I must suppress what I feel, or you will think me foolishly enthusiastic.’

She treasured the letter and kept the original envelope, upon which she wrote: ‘Southey’s advice. To be kept forever.’

Southey has become castigated for his views expressed in the letter. Of course it seems laughable at best, if not downright offensive, to believe that literature cannot be the business of a woman’s life. The poet laureate was, however, a product of his time, and his views would have been widely agreed with, as they even were by Charlotte at first.

Just what changed Charlotte’s viewpoint in the time between receiving this letter and becoming Currer Bell to escape prejudice? She certainly became more worldly-wise in the intervening nine or so years, but perhaps she was also influenced by Emily and Anne.

There is no doubt that Charlotte would have read Southey’s letter to her sisters, possibly to Anne on the day she received it, as she was then a pupil at the school Charlotte was teaching in. There is also little doubt that they may have been less impressed with the letter.

Anne Brontë formed her own opinions on matters ranging from religion to equality of the sexes, and she cared not if she was at odds with the prevailing opinions of the day. Her brilliant second novel The Tenant Of Wildfell Hall has been hailed by many as an early work of feminist fiction, and Anne leaves the reader in little doubt that she sees no difference between a man and a woman, and in what they should do with their lives. It is a theme that she returned defiantly to in her preface to the second edition of the Tenant Of Wildfell Hall, when she writes:

‘I am satisfied that if a book is a good one, it is so whatever the sex of the author may be. All novels are or should be written for both men and women to read, and I am at a loss to conceive how a man should permit himself to write anything that would be really disgraceful to a woman, or why a woman should be censured for writing anything that would be proper and becoming for a man.’

There is no better rebuttal to Robert Southey’s opinion than the poetry novels of Anne Brontë, and of her sisters Charlotte and Emily.

The Brontës And World Sight Day 2018
What Became Of The Real St. John Rivers?
The Aftermath Of The Life Of Charlotte Brontë

3 thoughts on “Robert Southey and the Infamous Letter”