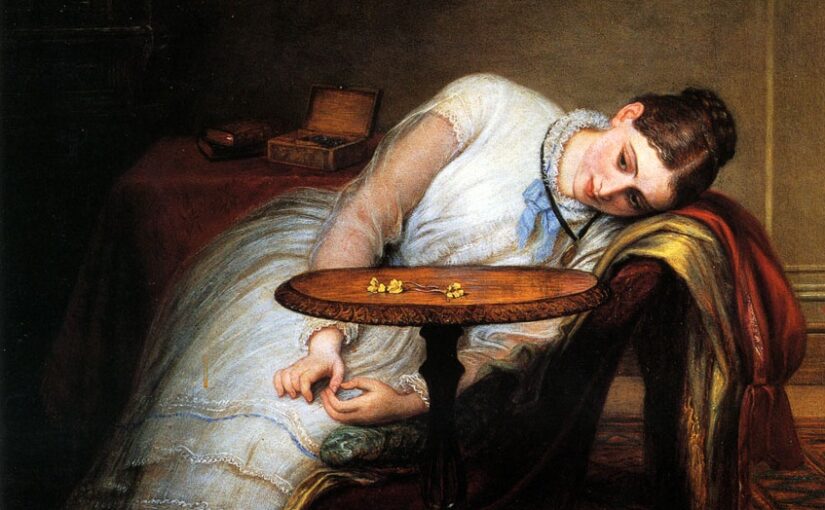 One reason that the novels of Charlotte Brontë, and those of her sisters Emily and Anne Brontë, still resonate today is that they cover something timeless: human emotions. Fashions change, technology changes, the way we spend our work and leisure time changes, the way we talk changes, but throughout the millennia of humanity the driving force of our emotions has remained the same. Charlotte’s novels covers the complete gamut of emotions brilliantly, so that they move a reader today just as much as they did in the mid-nineteenth century. Charlotte could describe these emotional highs and lows so brilliantly because she had experienced them herself, and it’s one particular aspect of this, and one particular letter, which we’re going to look at in today’s post.

Some people wonder how the Brontës wrote such powerful work when their own lives, on the surface, were quite reserved and insular. Charlotte herself gave a clue when she described Emily Bronte’s innate ability to get to the heart of people, their lives and emotions:

The Brontës had a complete mastery of writing about the human condition, with all its ups and downs, and Charlotte in particular had experienced these peaks and troughs in her own life. From the early losses of her mother and sisters Maria and Elizabeth, through the pain of unrequited love for Monsieur Heger, to the eventual triumph of her genius, and her marriage to Arthur Bell Nicholls. All too often, however, her life carried a melancholy tinge. Throughout her life Charlotte Brontë suffered from depression, and was often laid low by what she called bilious attacks, an attack on her mental and physical health that could leave her confined to bed for days at a time. As we have seen frequently on this blog, Charlotte was a brilliant letter writer, and in these letters she often talks frankly of her depression. This is the case in this moving yet mournful letter written to her best friend Ellen Nussey on this day, 20th February, 1845: 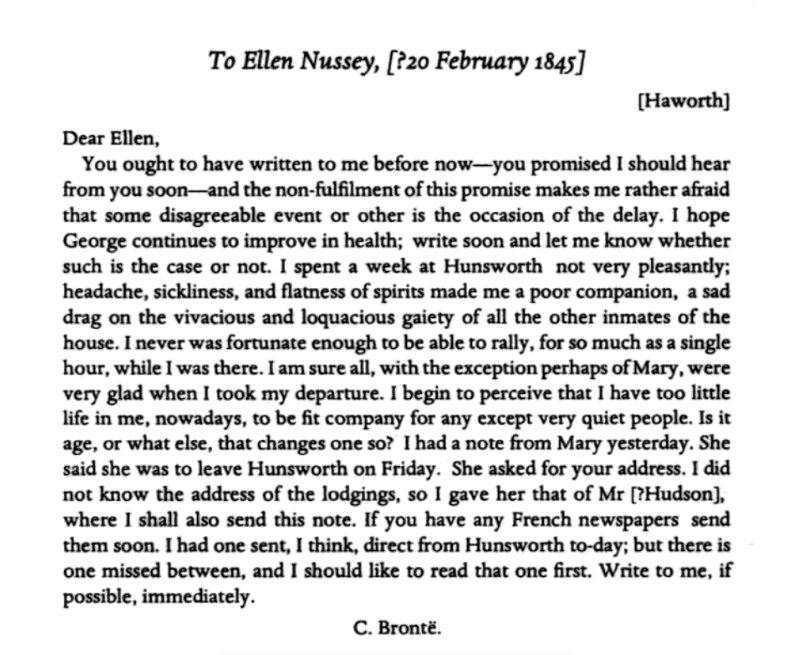 Charlotte has been visiting Hunsworth, a mill and house owned by the Taylor family. It was to Hunsworth that the Taylors decamped from the Red House of Gomersal after the death of cloth magnate Joshua Taylor. By 1845 it was therefore the home of Mary Taylor, Charlotte’s closest friend after Ellen.

Even the company of Mary Taylor, a brilliant woman who went on to achieve great things in her life, could not allay the black dog on this occasion. Charlotte is beset by worries: worries about her father’s failing eyesight, worries about Ellen’s family, particularly her brother George Nussey who has recently been placed in a York asylum – a worry which has strengthened because a delay in Ellen’s response to an earlier letter has led Charlotte to fear the worst about a man she was fond of. Worries about what she will do with her life now that she has returned to Haworth from Brussels, and an overpowering loneliness at the thought of the man, Constantin Heger, she had left behind there. It is that makes Charlotte so anxious to read French newspapers; simply reading the language spoken by Heger reminds her of the man who had once spoken it to her.

Charlotte attributes her increasingly frequent bouts of melancholy to her age, a theme she returns to in other letters as she approached the age of 30 – a figure which to Charlotte seemed to mark the end of youth and the onset of old age. She had always thought that by thirty a person should have achieved something in life or at least be on the path to something, yet she found herself as adrift and uncertain of her future as ever. She could not know, of course, that her greatest achievements and successes were still waiting for her and growing closer by the day.

Whether in her letters or her books, Charlotte Brontë was a brilliant writer; it is thanks to her superb skills that we feel empathy for herself, in her letters, and with her characters in her books. Quite simply, Charlotte, Emily and Anne Brontë were masters of understanding and reporting the human condition, and masters of words. Talking of which…

Wordle is everywhere. If you don’t yet know and love it, it’s a simple yet challenging game where you have to guess a five letter word in six attempts or fewer – one of the things which makes it so great is that everyone across the world has the same word to solve.

I love Wordle so I’ve decided to launch my very own Brontë-inspired wordle: a Brontëdle! We now have a dedicated Brontëdle page and there will be a new Brontë themed wordle for you to guess every day. The simple rules are explained more fully on the page where you’ll also find today’s all new Brontëdle. As with everything on this website, it will always be advert free and free of charge. Please feel free to bookmark it and tell any wordle-loving friends about it. 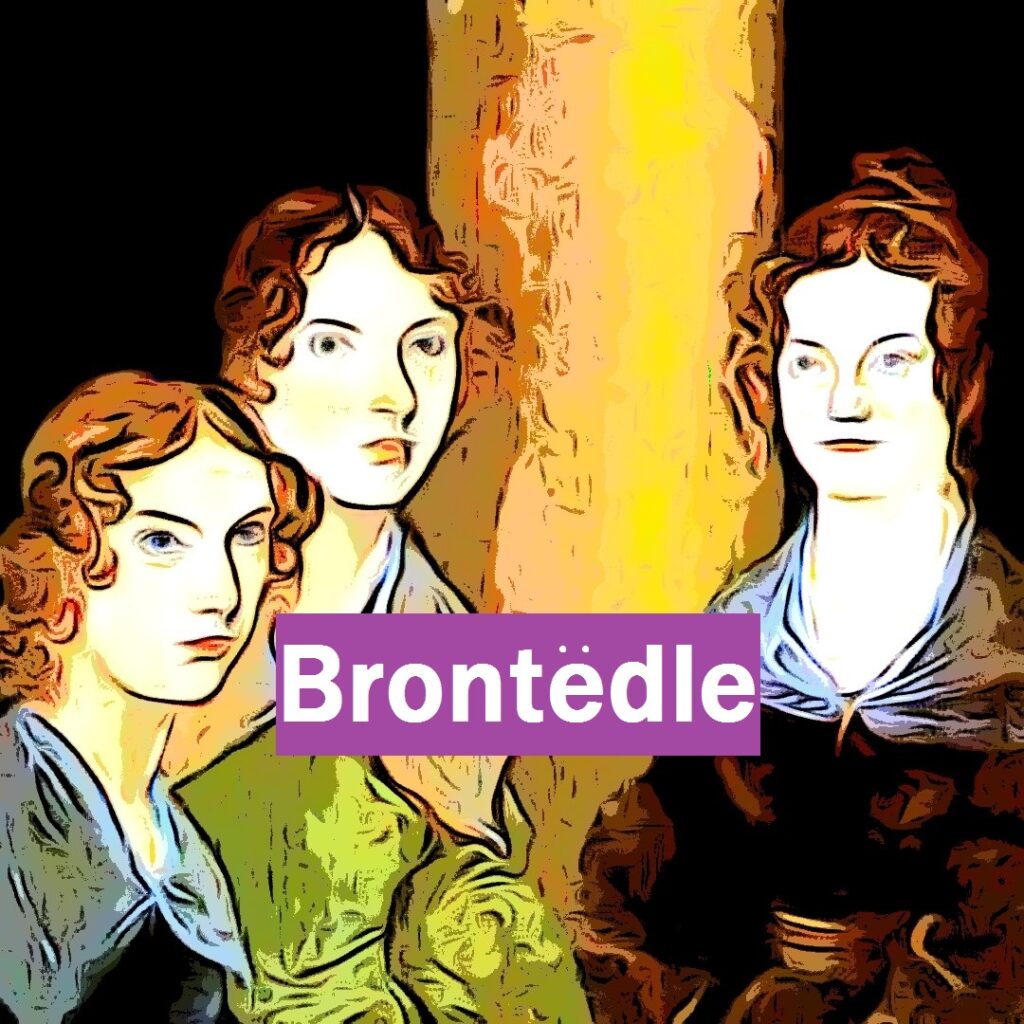 I hope you enjoy the Brontëdles, and I hope you enjoyed today’s post. Charlotte Brontë had to fight against her depression and bilious attacks throughout her adult life, and yet she emerged triumphant. I hope you can join me next week for another new Brontë blog post.

One thought on “A Mournful Letter From Charlotte Brontë”