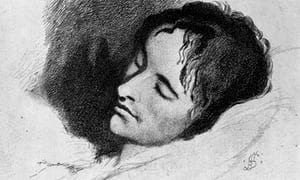 John Keats is one of the greatest poets of all time, and yet his lifespan was even shorter than that of the Brontë Sisters. He died 197 years ago this week, on 23rd February 1821, aged just 25. Keats did not achieve great success in his lifetime, although he was revered among his contemporaries like Byron and Shelley, but he quickly gained popular appeal after his death so although not mentioned explicitly in Charlotte’s letters, as many other Romantic poets were, it is likely that the Brontë sisters would have encountered his work throughout their youth and adulthood.

Keats, in his life and poetry, chimes with the Brontës. He loved nature, and was a romantic at heart as well as in poetry, and yet time was to deny him the chance of lasting love with his beloved Fanny Brawne. Like five of the Brontë siblings he was struck down with tuberculosis, and the terrible debilitating pain of the disease is heard in his masterpiece ‘Ode To A Nightingale’, in my opinion the greatest poem ever written, when he longs to drink a draught of poison and leave the world unseen (just as Charlotte would write of longing for a final draught of oblivion after the deaths of her sisters), and when he writes: ‘For many a time, I have been half in love with easeful Death, Call’d him soft names in many a mused rhyme, To take into the air my quiet breath; Now more than ever seems it rich to die, To cease upon the midnight with no pain.’

Keats’ dread of the pain of tuberculosis was one that Anne Brontë too had to come to terms with 28 years later. Like Anne, he sought some comfort in his final days by moving with a friend to a warmer climate, and while Anne went to Scarborough with Charlotte and Ellen Nussey, Keats travelled to Rome with his faithful companion Joseph Hunt. He left England at the urging of Leigh Hunt, his publisher and mentor who had nursed him in London, but it was to no avail. Keats is buried in Rome’s Protestant Cemetery, like Anne his resting place is far from his home and family. His final instructions contained a self-penned epitaph, his instruction were that his gravestone should read simply ‘Here lies one, Whose name was writ in water.’ Keats died in poverty and unheeded, certain that his genius would forever remain undiscovered, but he was wrong. In fact, he was closer to the truth when he had earlier written ‘Bards of Passion and of Mirth, Ye have left your souls on Earth! Ye have souls in heaven too, Double-lived in regions new!’

Keats then suspected that his words would live on and find an audience after his death, so that in that sense his soul would never really perish. He gained immense fame after his death, like his talents deserved, in the same way that we can celebrate the real Acton and Ellis Bell today, although they lived in obscurity.

In a strange postscript to Keats’ tragic life, given his watery epitaph, his death inspired Percy Shelley to write his brilliant poem ‘Adonais’. Shelley was also living in Italy then, and he invited Keats’ friend Leigh Hunt to join him there to discuss founding a magazine together. On 8th July 1822, sailing across the Gulf of Spezia after meeting Hunt, Shelley was caught in a storm and drowned. Shelley’s body was identified thanks to a book of Keats’ poetry that was found upon him when he was fished out of the water.

Anne Brontë never had a chance to meet John Keats, of course, but they did meet someone with a close connection to him. During the ill fated trip to London with Charlotte Brontë in July 1848, Anne and her sister dined at the house of W.S. Williams, the reader who had first discerned the brilliance of Jane Eyre. One of Williams’ daughters was a talented singer and after the meal she regaled the guests with a few areas alongside one of her friends who was also there called Julia. Charlotte wrote of her that she was a ‘girl with sparkling black eyes and the fine soprano’. Julia was also the daughter of Keats’ celebrated friend Leigh Hunt. We can imagine Charlotte and Anne discussing her famous father, and his by then even more famous former compatriot.

The nineteenth century was certainly a golden time for English literature, even though in the Romantic poets it often looked yearningly back to an earlier age. I’ll close today’s post with John Keats’ hymn to the power of art and beauty – ‘Ode On A Grecian Urn’:

‘Thou still unravish’d bride of quietness,
Thou foster-child of silence and slow time,
Sylvan historian, who canst thus express
A flowery tale more sweetly than our rhyme:
What leaf-fring’d legend haunts about thy shape
Of deities or mortals, or of both,
In Tempe or the dales of Arcady?
What men or gods are these? What maidens loth?
What mad pursuit? What struggle to escape?
What pipes and timbrels? What wild ecstasy?
Heard melodies are sweet, but those unheard
Are sweeter; therefore, ye soft pipes, play on;
Not to the sensual ear, but, more endear’d,
Pipe to the spirit ditties of no tone:
Fair youth, beneath the trees, thou canst not leave
Thy song, nor ever can those trees be bare;
Bold Lover, never, never canst thou kiss,
Though winning near the goal yet, do not grieve;
She cannot fade, though thou hast not thy bliss,
For ever wilt thou love, and she be fair!
Ah, happy, happy boughs! that cannot shed
Your leaves, nor ever bid the Spring adieu;
And, happy melodist, unwearied,
For ever piping songs for ever new;
More happy love! more happy, happy love!
For ever warm and still to be enjoy’d,
For ever panting, and for ever young;
All breathing human passion far above,
That leaves a heart high-sorrowful and cloy’d,
A burning forehead, and a parching tongue.
Who are these coming to the sacrifice?
To what green altar, O mysterious priest,
Lead’st thou that heifer lowing at the skies,
And all her silken flanks with garlands drest?
What little town by river or sea shore,
Or mountain-built with peaceful citadel,
Is emptied of this folk, this pious morn?
And, little town, thy streets for evermore
Will silent be; and not a soul to tell
Why thou art desolate, can e’er return.
O Attic shape! Fair attitude! with brede
Of marble men and maidens overwrought,
With forest branches and the trodden weed;
Thou, silent form, dost tease us out of thought
As doth eternity: Cold Pastoral!
When old age shall this generation waste,
Thou shalt remain, in midst of other woe
Than ours, a friend to man, to whom thou say’st,
“Beauty is truth, truth beauty,—that is all
Ye know on earth, and all ye need to know.”’