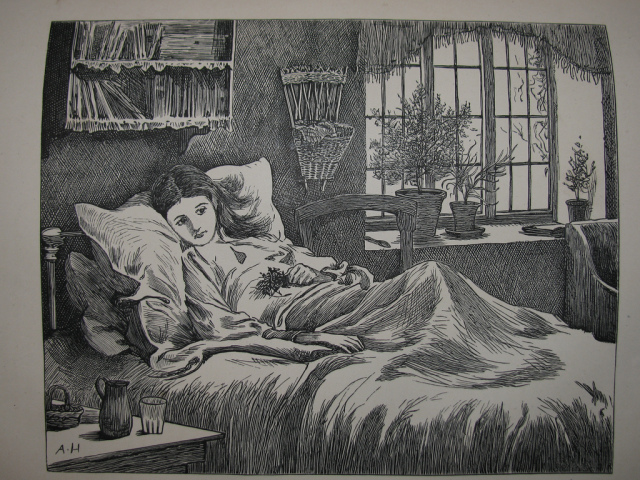 As it’s World Asthma Day, my thoughts have turned to Anne Brontë and the illnesses she had to endure. Often thought of as being weak and permanently unwell, was that really the case and was asthma actually the cause of her complaints?

Anne was the last of the six Brontë children to be born, and her mother Maria died just a year later. It’s easy to imagine how this could lead to her siblings, father and Aunt Elizabeth spoiling her and being extra protective of her. It seems as well that Anne suffered from asthma and was thought of as a fragile child, as it’s referred to in letters from Charlotte and from Anne herself.

A particularly bad attack occurred in late 1846, and it was to leave Anne in a weakened state for all of the coming year. Charlotte wrote of it to Ellen Nussey:

‘She had two nights last week when her cough and difficulty of breathing were painful indeed to hear and witness, and must have been most distressing to suffer; she bore it, as she does all affliction, without one complaint, only sighing now and then when nearly worn out.’

Asthma is a condition that results in a constructing of the airways, making it very hard to breathe when an asthma ‘attack’ occurs. The air struggling through the narrow passageway often produces a characteristic wheezing sound, and coughing. Like large numbers of other people today, I myself suffer from asthma, and it can be controlled through the use of preventative and relieving inhalers that allow the sufferer to live a relatively normal and active life. I can hardly imagine how awful and debilitating an attack of asthma would be without any medication to control or remove it.

Of course, medicine in the 1820s, 30s and 40s was very different to that of the present day. One treatment that was believed to help was crab cheese, and Anne thanks Ellen for sending her a jar of it in a letter dated 4th October 1847. It sounds unappetising to us today, even though it is made of sour crab apples rather than the crustaceans, but Anne ate it dutifully; she was always willing to try a remedy if it offered hope to her and the people who cared for her.

It’s easy to imagine Anne being housebound by this complaint, and being at death’s door throughout her life, but that wasn’t really so. Even though at some periods in her life, particularly when the cold east wind blew through the parsonage, she would often be ill and struggling to breathe, at other times she could be very active. She was a regular walking partner of her beloved sister Emily, and their excursions across the rugged moors could take in 20 miles or more in a day, distances that most people in modern society would think twice about attempting.

Is there another misconception about Anne’s recurring illness and breathing difficulties, could it be that asthma wasn’t the underlying cause at all, but something even deadlier? Leading medic Professor Philip Rhodes wrote in 1972:

‘In the winter of 1846 everyone at the Parsonage suffered from repeated colds and influenza. All except Anne seemed to recover, but her vitality was still impaired by the spring of 1847, and she suffered from asthma. She was then 27. Asthma is a wheezy type of breathing, which when it is of relatively late onset, as in Anne’s case, is usually due to some underlying disorder of the lungs. This could have been tuberculosis.’

Professor Rhodes also opines that Anne could have caught tuberculosis from her older sisters Maria and Elizabeth who succumbed to it when she was a child, or from her time as a teenager at Roe Head School, the first time she had spent time away from her home and family. Since that initial infection, Anne had lived with tuberculosis without realising it, and the coughing and breathing difficulties were one of its symptoms. When exposed to an even larger dose of consumption in London in 1848, then a hotbed of the disease, her sad end was inevitable.

The fact that Anne Brontë bore all this ‘without one complaint’ is testament to her fortitude and incredible character.