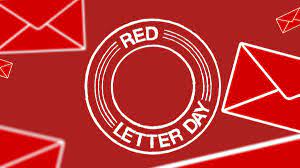 The internet has brought us many advances and opportunities, but it has also changed the way we live our lives forever. The art of letter writing is gone for ever, which leaves me wondering if in two hundred years time people will be buying books entitled (for example) ‘The Collected Emails of Kazuo Ishiguro’? Thankfully we will always have letter collections from the great writers of previous generations to look back on, and in today’s post we’re going to look at a timely selection of letters from one of the greatest letter writers of them all: Charlotte Brontë.

November 5th is a day when many of us are thinking about bonfire night celebrations and remembrances of Guy Fawkes. I hope your fireworks night went with a bang, and that any children or animals in your life weren’t too scared by the annual spectacle of noise and light. Charlotte Brontë herself was certainly interested in the Guy Fawkes story, so much so that she name checks him in Jane Eyre:

Nevertheless, on 5th November 1849 Charlotte found time to write three letters. It was a real red letter day for Charlotte Brontë and for us, for the letters give us a fascinating glimpse into Charlotte’s life at this time, especially the final letter in this triumvirate – the one addressed to W. S. Williams of her publisher Smith, Elder & Co. This letter is very typical of Charlotte’s epistles in that it is both brilliant and moving. I present the three letters now, the first of which is addressed to Amelia Ringrose, a friend of both Charlotte and Ellen Nussey (to whom the second letter is addressed). Amelia was on the brink of becoming engaged to Ellen’s brother George Nussey, but the increasing severity of his mental illness put paid to that and by the time of this letter Amelia was being courted by Joe Taylor, brother of another mutual friend Mary Taylor. Amelia and Joe married and had a daughter named Tim, but tragedy was waiting for the Taylor/Ringroses just as it had waited for the Brontës. Joe died in 1857, Tim in 1858 and Amelia in 1860. 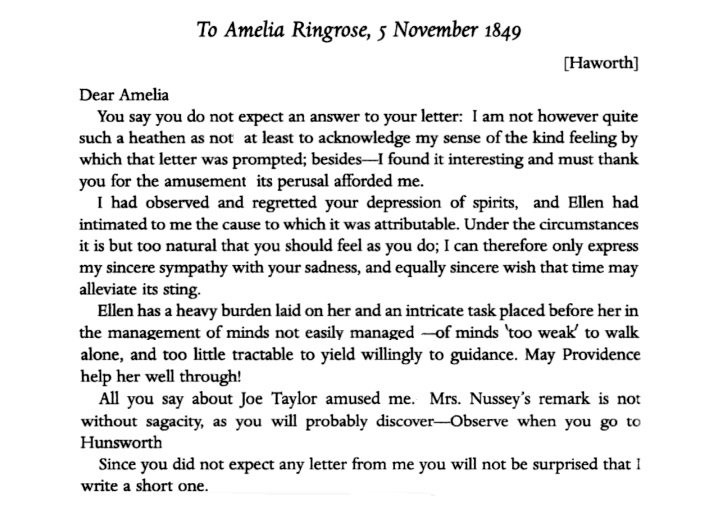 The next letter is to Charlotte’s great friend Ellen Nussey: 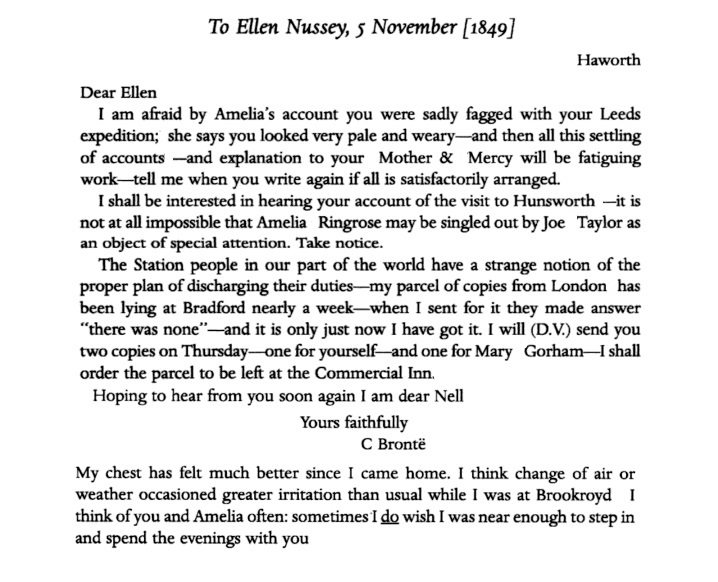 Ellen, as the youngest of the eleven Nussey siblings (not all of whom survived into adulthood), was often put upon and in this instance she was in charge of the Nussey household accounts and presenting them to her mother and her eldest sister Mercy Nussey – an onerous task that Charlotte sympathised with. Finally, we see the letter to W. S. Williams: 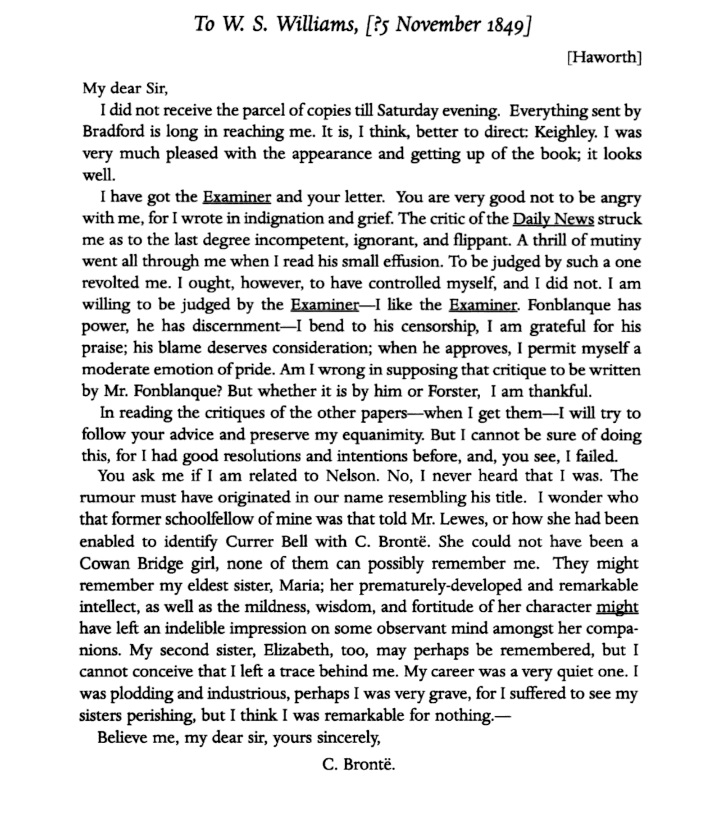 These three letters tell us so much about Charlotte’s life at this time. She savages a critic (of her second published novel Shirley), refutes a family connection to Nelson and above all, remembers her beloved and tragic elder sisters Maria and Elizabeth Brontë. By the time of this trio of letters, all five siblings of Charlotte Brontë was dead. Her letters from this period and beyond are always brilliant, but a vein of melancholy is never far beneath the surface.

I hope that your day and week ahead will be far from melancholic, and I hope to see you next week for another new Brontë blog post.