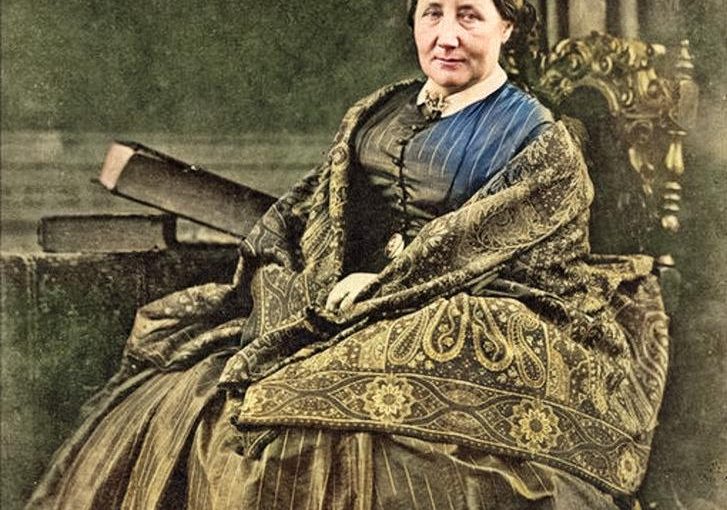 At the end of September 1853 Elizabeth Gaskell made her first visit to see her friend Charlotte Brontë at Haworth Parsonage. Much of the information she gathered at this initial visit, and the first impressions she made, impacted upon her later biography The Life Of Charlotte Brontë. It’s a brilliant book, but we get an even clearer impression of Elizabeth Gaskell’s views on Charlotte, Patrick Brontë, Haworth and more in a remarkable letter that she wrote at around this time of the year in 1853 – and it’s that letter that we’re going to look at today. 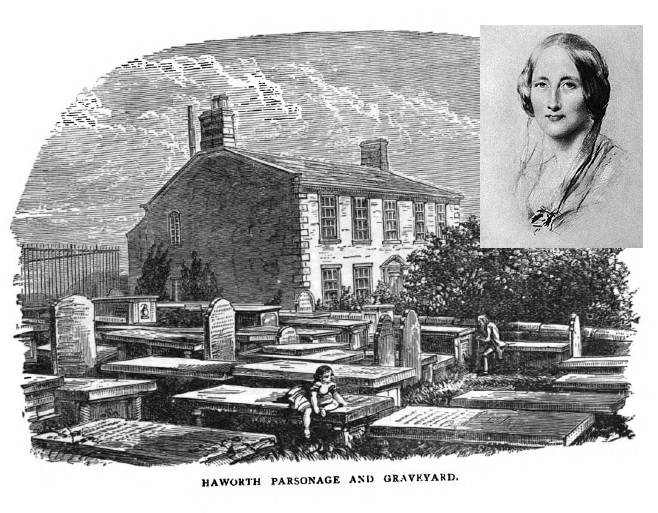 We don’t know the exact date, but we know that it was written at the very end of September or start of October, and it was addressed to a John Forster. Forster was a biographer and influential critic, and he was one of the founders of the Guild of Literature and Art. He himself had met Charlotte Brontë in December 1849, before she made the acquaintance of Gaskell. I will reproduce the letter in full below, but we’ll take a quick look at some points within it first.

The ‘ruddy kind-looking man’ whom Elizabeth met on the steps to the parsonage was Francis Bennoch. Their paths crossed fleetingly, and it seems that Elizabeth was unaware of who he was. In fact, Bennoch was one of the richest industrialists in the north of England, owner of a large silk factory in Manchester. He became renowned for his love of literature and especially for his philanthropy and charitable actions towards the poor. He imposed himself upon Charlotte, but both she and her father found him charming. In a letter to Bennoch of 29th September 1853, Charlotte wrote:

‘Both my father and myself and enjoyed the interview much, and I only regretted that you could not add another hour or two to your stay, and thus have made the acquaintance of Mrs. Gaskell. You are right in conjecturing that she was the lady who arrived just as you were departing.’

Bennoch was a self-made man and Gaskell sums him up as a man of no refinement, but this gives us a clue to further points within the letter and her biography of Charlotte. Gaskell had a troubled start to her life, having to leaver her London home to be raised by her aunt in Knutsford, yet she certainly had a very privileged upbringing. Her novels such as North And South contain brilliant depictions of working class life, and yet Elizabeth herself had never experienced that life herself. She had no innate sympathy for people from working class backgrounds who had raised themselves up – people like Francis Bennoch; people like Patrick Brontë.

Within this letter we see that Patrick Brontë has treated her with kindness and respect, and yet she has clearly taken against him from this very first meeting because of ‘a glare of his stern eyes’ that made her ‘know my man’. In fact that glare may be related to something else she mentions – Patrick’s cataracts and near-blindness at that point. She is critical of his decisions to eat alone and to walk on the moors alone, but perhaps she could instead have seen a man who found his strength failing and his life ebbing away, but who didn’t want to be a burden on the daughter he loved?

As in her biography of Charlotte, Elizabeth is very critical of the Haworth villagers, especially those who have made money. In the biography she called them ‘sleuth-hounds after money’ and in this letter they are ‘queer people’ while the poor are ‘densely ignorant.’

Nevertheless this letter is profoundly moving in many places, such as when Patrick talks of Keeper, or when Martha talks of the deaths of Emily and Anne Brontë and the diminishing group of people walking around the dining room table: ‘now my heart aches to hear Miss Brontë walking, walking on alone.’

This is a beautiful and very informative letter, and written not from hazy recollections but just days after the events described happened. I reproduce it below, and hope you can join me next week for another new Brontë blog post. 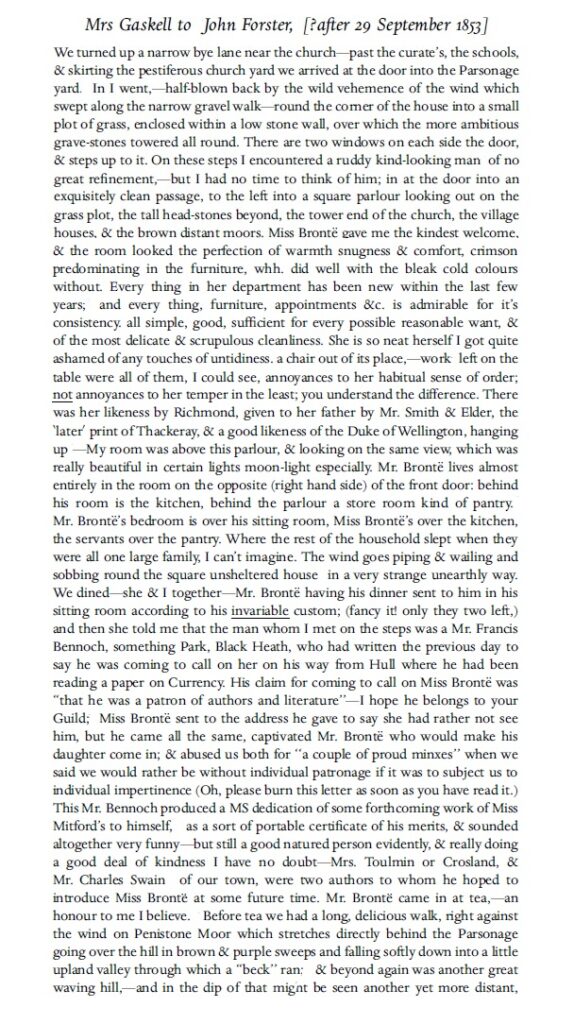 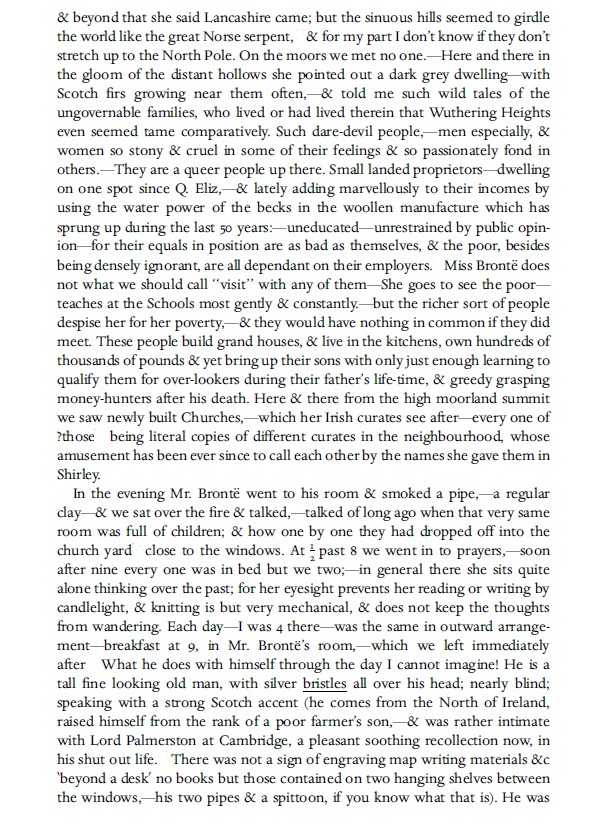 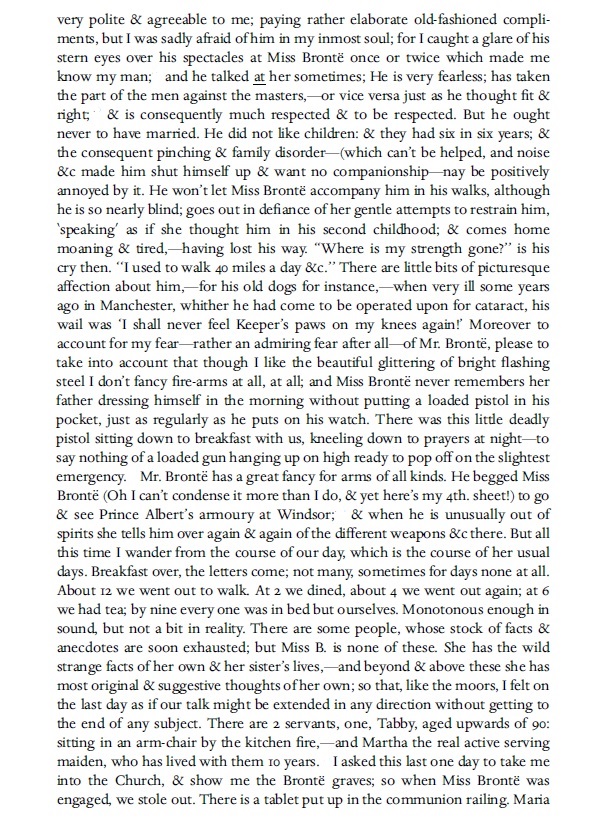 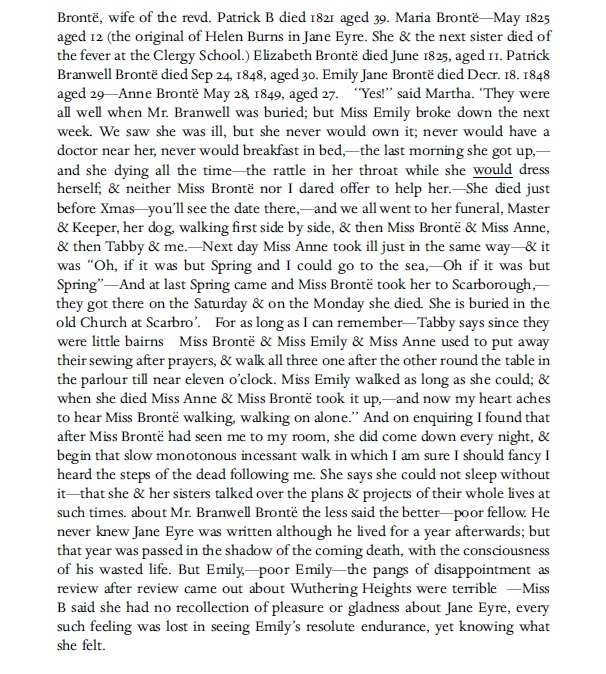 Branwell Brontë -The Death of the Penitent
Who Delivered The Brontë Children In Thornton?
Margaret Wooler: Loyalty And Love

6 thoughts on “Elizabeth Gaskell’s Moving Letter On The Brontës”