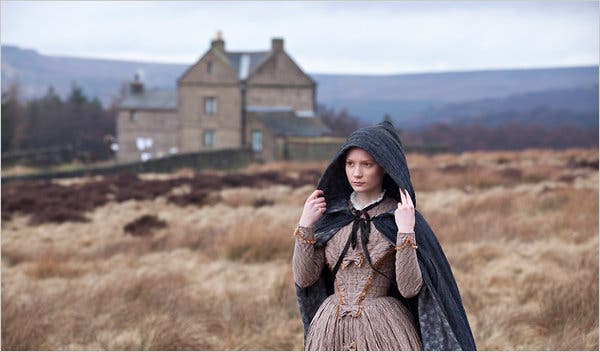 In Autumn 1847 the fortunes, and fame, of Charlotte Brontë were changed in rapid fashion thanks to two words: Jane Eyre. The speed with which the book was accepted and then published, and then with which it found favour with the reading public is unthinkable by modern standards, and remarkable even in the 19th century. Thanks to a letter written on this day in 1847 we have an insight into the terms that Charlotte’s publisher offered to her, and her response to them. In today’s post, then, we’ll take a look at the publishing contract for Jane Eyre.

The story is well known of how Charlotte Brontë wrote Jane Eyre rapidly after being encouraged to send another work by the London based publisher Smith, Elder & Co; they had rejected the work she had initially sent, The Professor, although as we shall see Charlotte didn’t take that decision lying down. Charlotte’s new manuscript was sent to Smith, Elder on 28th August 1847; George Smith read it in one day, cancelling his dinner appointment, and was enthralled; less than two months later, on 16th October 1847, it was available to buy.

By mid September the initial agreements had been made, and George Smith had written to Currer Bell (he of course had no idea at that time that the author was actually a woman named Charlotte) with some further suggestions. Here is Charlotte’s reply to his letter, written 174 years ago today:

‘Gentlemen, I have received your letter and thank you for the judicious remarks and sounds advice it contains. I am now however in a position to follow the advice; my engagements will not permit me to revise ‘Jane Eyre’ a third time, and perhaps there is little to regret in the circumstance; you will probably know from personal experience that an author never writes well till he has got into the full spirit of his work, and were I to retrench, to alter and to add now when I am uninterested and cold, I know I should only further injure what may already be defective. Perhaps too the first part of ‘Jane Eyre’ may suit the public taste better than you anticipate – for it is true and Truth has a severe charm of its own. Had I told all the truth, I might indeed have it more it far more exquisitely painful – but I deemed it advisable to soften and retrench many particulars lest the narrative should rather displease than attract.

I adopt your suggestion respecting the title; it would be much better to add the words “an autobiography.”

In accepting your terms, I trust much to your equity and sense of justice. You stipulate for the refusal of my two next works at the price of one hundred pounds each. One hundred pounds is a small sum for a year’s intellectual labour, nor would circumstances justify me in devoting my time and attention to literary pursuits with so narrow a prospect of advantage did I not feel convinced that in case the ultimate result of my efforts should prove more successful than you now anticipate, you would make some proportionate addition to the remuneration you at present offer. On this ground of confidence in your generosity and honour, I accept your conditions.

I shall be glad to know when the work will appear. I shall be happy also to receive any advice you can give me as to choice of subject or style or treatment in my next effort – and if you can point out any works peculiarly remarkable for the qualities in which I am deficient, I would study them carefully and endeavour to remedy my errors.

Allow me in conclusion to express my sense of the punctuality, straight-forwardness and intelligence which have hitherto marked your dealings with me, And Believe me Gentlemen, Yours Respectfully, C Bell.

Since you have no use for ‘the Professor’, I shall be obliged if you will return the M.S.S. [manuscript] Address as usual to Miss Brontë &c.’

From this letter we can see that Charlotte had great confidence in her work, and that she hated the editing process – something she also referred to prior to the publications of her later novels. Two revisions were all she could stomach and she absolutely refused to do any more – as the result of this is the Jane Eyre we know and love, it’s safe to say that Charlotte was right.

It’s interesting to see as well that Smith had suggested that the first part, that dealing with Jane’s childhood and especially her time at Lowood school, was the weakest. Once again, it seems to me that Charlotte was right, and the book would be greatly diminished if this section had been altered or removed.

Under the terms of the contract Charlotte had been offered an advance of one hundred pounds for this novel and two subsequent novels; she feels that this is scant reward for the intellectual effort to write a novel, although it is at least twice as much as a governess or teacher would earn in a year – as another comparison, Branwell Brontë earned an annual salary of £75 when he was appointed Assistant Clerk at Sowerby Bridge Railway Station.

Charlotte has confidence in Smith, Elder, however, and is confident, even without it being mentioned in the contract, that they will increase the advances offered if Jane Eyre proved to be as successful as she expected. Once again, Charlotte was right as by the time that her next novel, Shirley, was being readied for publication she was given an advance of £500.

This simple letter is really an important historical document for it charts the moment that the green light was given for the publication of Jane Eyre. Charlotte was supremely confident in her own ability and in the work she had produced, and that’s an example that all writers can learn from. I hope to see you all again next Sunday for another new Brontë blog post.