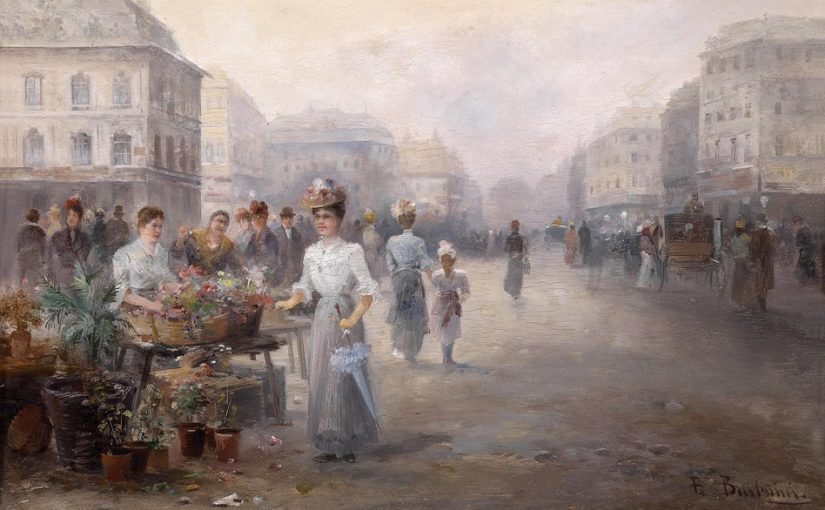 This weekend marked the anniversary of a letter sent by Charlotte Brontë to Ellen Nussey which contained my favourite drawing by Charlotte. It was sent from Brussels on 6th March 1843, and you can see a reproduction of it below. In today’s post we’re going to look at the significance of the picture, and what it tells us about Charlotte’s second year in the Belgian capital. 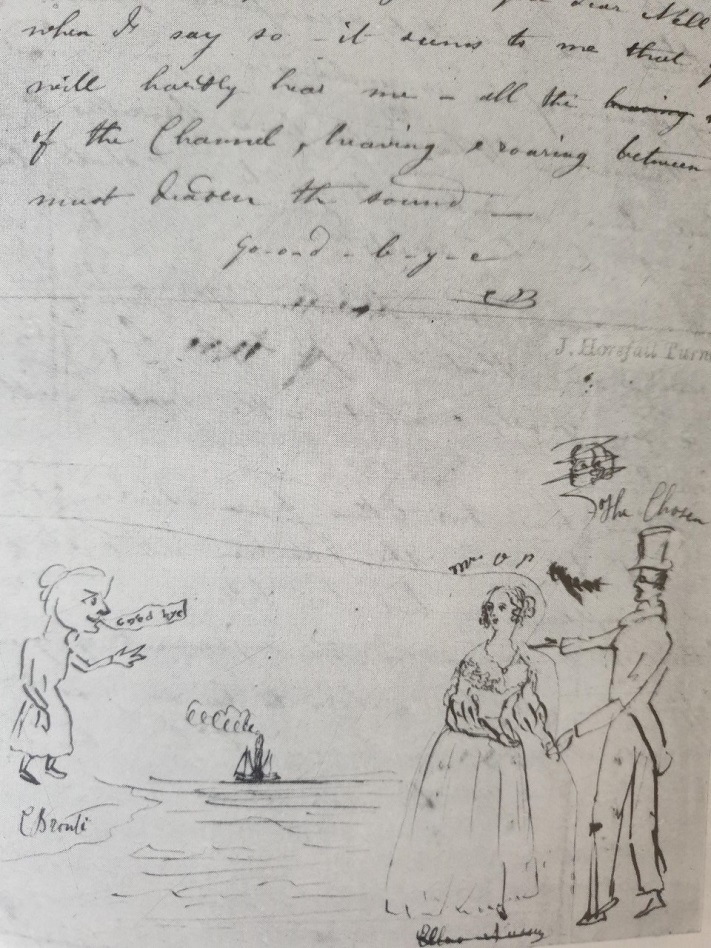 So what does this picture show us. Well to the left is a tiny little figure, with an oversized head and spindly arms, and Charlotte has helpfully identified this by putting her own name beneath it. On the right is a woman labelled Mrs O P and alongside her is a rather dandy looking chap given the title of the chosen – between them is the sea, and a steam ship chugging away into the distance. Charlotte is saying ‘good bye’; she also spells this out in the last words of the letter, with the addition of dashes to make it a drawn out ‘g-o-o-d b-y-e’, as if she can’t bear to leave the recipient. The recipient of the letter was, of course, Ellen Nussey, and her name is also given in the sketch to identify her as Mrs O P.

Charlotte is obviously missing her best friend Ellen, and feels that the gulf between them is not only the one caused by the sea – there is the foreboding prospect of a man. So who is this chosen one who Charlotte fears will take Ellen from her forever? We get a clue in an earlier letter, one that Charlotte had sent to Ellen on 20th November 1840, in which she writes:

‘In the first place, before I begin with thee, I have a word to whisper in the ear of Mr Vincent and I wish it could reach him… why does not that amiable young gentleman come forward like a man and say all that he has to say to yourself personally instead of trifling with kinsmen and kinswomen? Mr Vincent I say – walk or ride over to Brookroyd [the Nussey home in Birstall] some fine morning – where you will find Miss Ellen sitting in the drawing room… and say “Miss Ellen I want to speak to you”… Then begin in a clear, distinct, deferential but determined voice – “Miss Ellen I have a question to you, a very important question – will you take me as your husband, for better for worse? I am not a rich man, but I have sufficient to support us; I am not a great man but I love you honestly and truly – Miss Ellen if you knew the world better, you would see that this is an offer not to be despised – a kind, attached heart and a moderate competency.” Do this Mr Vincent and you may succeed – go on writing sentimental and love-sick letters to Henry and I would not give sixpence for your suit.

From what I know of your character – and I think I know it pretty well – I should say you will never love before marriage. After that ceremony is over, and after you have had some months to settle down, and to get accustomed to the creature you have taken for your worse half – you will probably make a most affectionate and happy wife – even if the individual should not prove all you should wish… I have told you so before, and I tell it you again. Mediocrity in all things is wisdom – mediocrity in the sensations is superlative wisdom.’

Charlotte, as so often in her letters, paints a pretty picture which is almost the equal of her great books. When I think of this situation, Jane Austen novels come to mind, or, especially, Bridgerton. Mr. Vincent is obviously enamoured with Ellen, understandably so, but he is wooing her through the intermediary of her elder brother Henry Nussey, the vicar of Hathersage. It seems that Mr Vincent is still following regency conventions, whereas Charlotte prefers a more modern approach where the suitors talk to each other in person.

Did the potential betrothal fizzle out, as Charlotted predicted? Well, the answer is in the letter sent from Brussels two and a quarter years later. If we take another look at Mrs O P we see that a word has been scribbled out, a word still discernible as Vincent. This then is the chosen one – the Regency style, prim-and-proper, suitor, Reverend Osman Parke Vincent. The relationship is still slowly fizzing on then, and this must have brought mixed emotions for Charlotte Brontë. In her first months in Brussels she had sister Emily for company, but by 1843 she was all alone and increasingly prone to dark thoughts regarding Constantin Heger. We would expect Charlotte to turn, via letters, to Ellen for advice, but the same letter we’ve looked at above also includes the line, ‘You do not merit that I should prolong this letter. Good-bye to you dear Nell, when I say so it seems to me that you will hardly hear me.’

We have an amusing sketch at the bottom of this letter, undoubtedly, and one that expresses Charlotte’s feelings of inadequacy when comparing herself to Ellen in looks or character – something she expresses in her letters on a number of occasions. It is also a sad sketch, however, as Charlotte waves a despairing goodbye – perhaps Ellen has not been replying to her letters as fulsomely as she wanted, or at all, as she is too pre-occupied with the attentions of Reverend Vincent?

Ellen Nussey never married, but on May 19th 1844 Osman Parke Vincent married Elizabeth Hale Budd. Charlotte’s sixpence was safe after all, but dreams of romance and marriage for Ellen were over. It would have been, perhaps, a better match than Charlotte had supposed. Osman was the son of John Painter Vincent, one of the leading surgeons of the day who was twice elected President of the Royal College of Surgeons. The Vincents as a whole were a wealthy family of bankers and silk merchants.

Please excuse the lateness of today’s post, for reasons beyond my control. I hope to see you next Sunday for another new Brontë blog post.