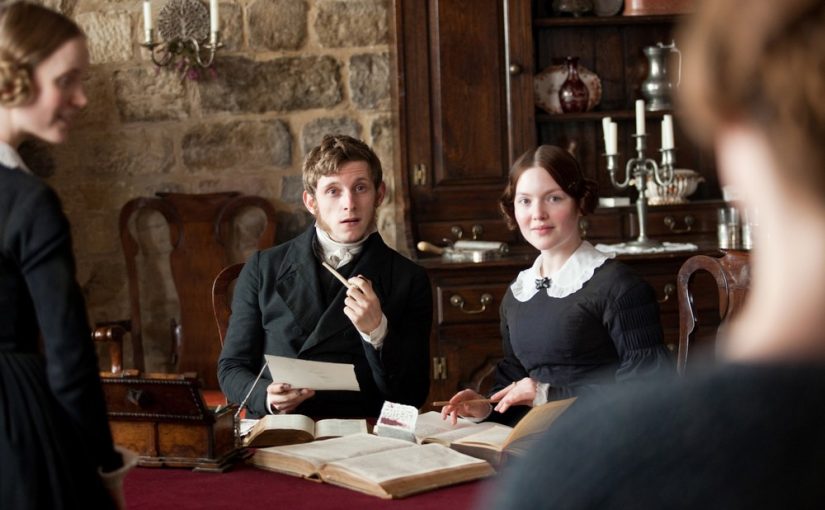 One of the great things about all Brontë novels is that they are jam packed full of fantastic characters – some we love (like Agnes Grey), some we root for (Jane Eyre or Helen Graham), and some who are sheer villains (Heathcliff and Arthur Huntingdon, for example) and some who can irritate us immensely with their piety and pomposity; foremost among these rascals is surely Jane Eyre’s ecclesiastical cousin St. John Rivers, but just who was the real St. John Rivers, and what became of him?

Many Brontë characters are based on real people, perhaps that’s why they’re all so brilliantly observed; Agnes is surely Anne Brontë herself recounting her two roles as governess, Weston is her tragic love William Weightman, whilst Charlotte’s unrequited love Constantin Heger inspired Rochester and Paul Emanuel of ‘Villette’. St. John is clearly modelled on someone Charlotte knew well too, and whilst in the book he proposed to Jane Eyre in real life he proposed to Charlotte Brontë.

The character St. John Rivers is a cold man who is completely dedicated to his religious faith, and to whom love and emotions of any kind should be subdued, if they ever surface at all. When it finally comes, St. John’s proposal is far from romantic:

“Jane come with me to India: come as my helpmeet and fellow-labourer… God and nature intended you for a missionary’s wife. It is not personal, but mental endowments they have given you: you are formed for labour, not for love. A missionary’s wife you must be – shall be. You shall be mine: I claim you – not for my pleasure, but for my Sovereign’s service.”

St. John is determined to become a missionary, and he relentlessly pressurises Jane to accept his proposal and leave England behind for ever. Thankfully she is saved from his bullying coercion by a vision of Rochester, giving her the strength to leave her cousin and find her true love – and the rest is literary history. In real life, Charlotte Brontë didn’t find it quite so hard to escape St. John’s clutches.

The first half of the nineteenth century was a time of adventure and discovery for the intrepid explorers of the expanding British Empire – of course today, we also see the other, cruel, side of colonialism, but the Brontës, like so many others at this time, loved reading of their exploits. Alongside explorers, large numbers of missionaries travelled with the intention of converting people to Christianity – it was a dangerous profession, not only because many didn’t want to be converted but because of the diseases and extreme temperatures they faced, but it was a glamorous one too. The Brontë’s uncle John Kingston had served as a missionary in the Caribbean and America, Arthur Bell Nicholls applied to become a missionary in Australia after his proposal of marriage was rejected by Charlotte, and the real St. John Rivers, like his fictional counterpart, also dreamed of becoming a missionary – his name was Henry Nussey, brother to Charlotte’s best friend, and one time vicar of Hathersage who was to end his life in truly tragic circumstances.

Henry Nussey was born in 1812, one of the six elder brothers of Charlotte’s great confidante Ellen Nussey, and she grew to know him well. He was a serious and religious man, and he seems to have proposed to Charlotte for exactly the same reason that St. John Rivers proposes to Jane Eyre – he felt a minister needed a wife to support his work.

On 1st March 1839, Henry Nussey wrote to Charlotte proposing marriage to her, but her subsequent letter to his sister Ellen shows why she rejected it:

“You ask me dear Ellen whether I have received a letter from Henry. I have about a week since, the contents I confess did a little surprise me, but I kept them to myself, and unless you had questioned me on the subject I would never have adverted to it. Henry says he is comfortably settled in Sussex [where he was then a vicar], that his health is much improved & that it is his intention to take pupils after Easter – he then intimates that in due time he shall want a Wife to take care of his pupils and frankly asks me to be that Wife… I asked myself two questions – ‘Do I love Henry Nussey as much as a woman ought to love her husband? Am I the person best qualified to make him happy?’ Alas Ellen my Conscience answered ‘no’ to both these questions. I felt that though I esteemed Henry, though I had a kindly leaning towards him because he is an amiable well-disposed man, yet I had not, and never could have that intense attachment which would make me willing to die for him – and if ever I marry it must be in that light of adoration that I will regard my Husband… Could I, knowing my mind to be such as that, could I consciously say that I would take a grave quiet young man like Henry? No it would have been deceiving him.”

Henry had a rather less romantic notion of marriage, as unbeknownst to Charlotte just 11 days prior to his proposal to her, he had also proposed to the sister of a priest he had previously served as curate under at Burton Agnes in Yorkshire’s North Riding. Margaret Ann Lutwidge also rejected him, and she would later become aunt to a famous literary nephew – Charles Lutwidge Dodgson, better known as Alice’s creator Lewis Carroll. Therefore, Henry’s first two quickfire proposals could have seen him become husband to Charlotte Brontë or uncle to Lewis Carroll, but it seems he had little interest in literature and the arts himself.

Like St. John Rivers, Henry Nussey had dreams of becoming a missionary, and aged just 16 he had written in his diary:
“I trust I shall be called to the ministry, and if it should be the Lord’s will, I would, for Christ’s sake, gladly be called to be a missionary, if I could in any way be an instrument in God’s hands, of promoting the salvation of mankind.”

Henry never gave up his dreams of missionary work, or of marriage, and on 23rd May 1845 Reverend Henry Nussey married the wealthy Emily Prescott of Everton, Lancashire, originally from Hampshire. By this time he was serving as parish priest in Hathersage in Derbyshire’s Peak District. This is the town recreated as Morton in ‘Jane Eyre’ whose parish priest was St. John Rivers, just as Henry was the vicar there in reality. Charlotte’s time in Hathersage, alongside Ellen who was visiting her brother, hugely influenced Jane Eyre, as the Eyres of Hathersage were the leading local family.

St. John Rivers is rejected by Jane but continues on his mission, but, alas, life for Henry Nussey was not to be so straightforward.

Before marrying Miss Prescott, Henry Nussey had delayed his marriage by six months as he wanted to spruce up Hathersage Parsonage first, and his sister Ellen, always the practical one of the family, was called in to help him with this refurbishment. In a letter of March 1845, however, Charlotte had warned against this:

“I shall be so sorry when you are gone to Hathersage – you will be so far off again, how long will they want you to stay? I should say Henry would do wisely to make sure of Miss Prescott immediately – 6 months is a long time to wait, adverse things might happen in the meanwhile.”

It seems that Charlotte’s advice was heeded as the wedding was brought forward, but what were these ‘adverse things’ alluded to?

Henry Nussey had suffered ill health throughout his life, physical and mental. During his service as an assistant curate in his home town of Birstall, early in his ecclesiastical career, he recorded that he had become ‘harassed in mind’, and he was unable to continue in his role. Similarly, he was asked to leave his later post in Burton Agnes because he was having difficulty in delivering sermons and performing the duties of a priest.

Henry had received a head injury in his youth after being thrown from a horse, and there is some thought that this may have contributed to the mental health problems that plagued him throughout his adult life. By July 1847, Henry had given up his role as parish priest in Hathersage, and he and his wife travelled to the continent, hoping that the warm climate and new scenery would be good for his health. This doesn’t seem to have worked, and as well as giving up his vocation as a priest, Henry was soon forced to give up his marriage too.

The excellent detective work of Linda Pierson discovered what happened next. She discovered that in the 1850s, Henry had been admitted to Kingsdown Lunatic Asylum in Box, Wiltshire. In January 1860, he was moved from there to Arden House, a private asylum in Shakespeare country, where his entry record describes the former vicar of Hathersage as ‘lunatic’.

At Arden House, Henry is also recorded as being, “melancholic, at times violent and dangerous to himself and others.”

A half hidden grave at St. Peter’s church, Wootton Wawen in Warwickshire shows what happened next; it bears the following inscription:

“Sacred to the memory of the Revd Henry Nussey MA of Mag Coll Cambridge and late Vicar of Hathersage who died in this parish on the 20th day of August 1860 aged 48 years. He was the seventh son of the late John and Eleanor Nussey of Ridings near Leeds. Blessed are the dead that die in the Lord.”

Henry had taken his own life in Arden asylum, becoming the second of Ellen’s brothers to die in this way. In 1838, the great hope and success of the family, William Nussey who was Royal Apothecary and a physician to Queen Victoria herself, and who had been offered a knighthood, died after throwing himself into the River Thames. The Nussey story is often a tragic one, and none more so than that of Henry Nussey, the real St. John Rivers.

7 thoughts on “What Became Of The Real St. John Rivers?”