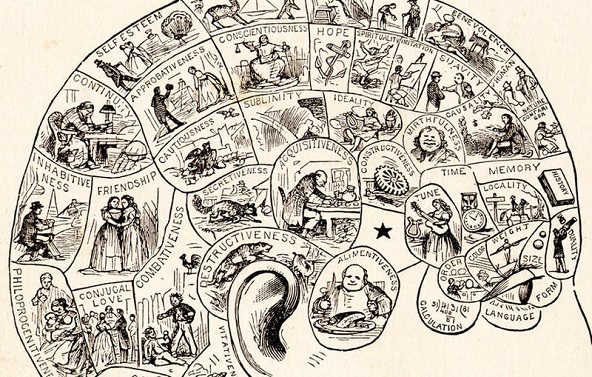 How is your head feeling today? No, I’m not implying that you overindulged on Saturday evening, I’m talking about the bumps on your head and the swelling of your skull? Still none the wiser? Today we’re discussing phrenology and why the Brontës were so fascinated with it, and we’ll then take a look at the rather revealing things a leading phrenologist had to say about Charlotte Brontë herself.

It may sound strange in our highly scientific age, but phrenology was very popular, and widely believed, in the early nineteenth century. It rapidly gained popularity in England after the 1819 work ‘Essays On Phrenology’ was published by George Combe. In it he expounded Franz Gall’s theories that each part of the brain corresponded to different characteristics, emotions and moral values, meaning that by feeling someone’s head, and feeling which parts of their skull were particularly pronounced, they could find a person’s true personality and fate.

At the time it was considered a cutting edge scientific discipline, with people having phrenological busts in their homes to help them read the heads of visitors – modern examples of which can be seen in the fabulous ‘The Cabinet of Curiosities‘ shop in Haworth, which was once the village apothecary.

References to phrenology can be found in the writing of great Victorian authors such as Dickens and George Eliot, but they occur particularly often in Charlotte Brontë’s novels.

For example, in Jane Eyre, Blanche Ingram tries to turn attention away from the fortune telling she’s just received (by a disguised Rochester) by telling her questioners: ‘really your organs of wonder and credulity are over excited.’

The organs of wonder and credulity were just two phrenological areas, and Charlotte references more of them in ‘The Professor’ when she writes: ‘what good can your bumps of ideality, comparison, self-esteem, conscientiousness, do you here?”

It seems that Charlotte was keen on putting her knowledge of phrenology to the test with people she met, so we can be sure she’d felt the heads of Anne and Emily. We know this as her great friend Mary Taylor told Elizabeth Gaskell of this practice, and that ‘Charlotte said she could get on with any one who had a bump at the top of their heads’ – this, it should be noted, to phrenologists is the bump of conscientiousness referred to in ‘The Professor’.

Doubtless Charlotte told her publisher and friend George Smith of her beliefs, and probably felt the shape of his head too, for in his memoirs he gives a delightful and detailed account of taking her with him to see a professional phrenologist called Dr. Browne. They posed as brother and sister, Mr and Miss Fraser, and the doctor later gave him a typed account of his assessment. It should be noted that Dr. Browne had no idea who ‘Miss Fraser’ really was (although the difference in social standing and accent between the grand London gent Smith and the shy and retiring Yorkshire woman Charlotte may have led him to realise that they weren’t related, something he no doubt discretely ignored), and yet he makes some very acute observations. Browne records that ‘in its intellectual development this head is very remarkable’, and ‘if not a poet her sentiments are poetical, or are at least imbued with that enthusiastic glow which is characteristic of poetical feeling.’

It should be noted as well that the doctor did not give such glowing reports to everyone, as Smith himself was disappointed with the mundane reading that his head produced. I will leave you with the full reading of the bumps on Charlotte Brontë’s head. It really is a remarkably accurate reading in parts, so whilst phrenology is looked down upon today, maybe the Victorians were right to consider things that might not be explained by science alone:

“A Phrenological Study Of The Talents And Dispositions of A Lady.

Temperament for the most part nervous. Brain large, the anterior and superior part remarkably salient. In her domestic relations this lady will be warm and affectionate. In the care of children she will evince judicious kindness, but she is not pleased at seeing them spoiled by over-indulgence. Her fondness for any particular locality would chiefly rest upon the associations connected with it. Her attachments are strong and enduring — indeed, this is a leading element of her character; she is rather circumspect, however, in the choice of her friends, and it is well that she is so, for she will seldom meet with persons whose dispositions approach the standard of excellence with which she can entirely sympathise. Her sense of truth and justice would be offended by any dereliction of duty, and she would in such cases express her disapprobation with warmth and energy; she would not, however, be precipitate in acting thus, and rather than live in a state of hostility with those she could wish to love she would depart from them, although the breaking-off of friendship would be to her a source of great unhappiness.

The careless and unreflecting, whom she would labour to amend, might deem her punctilious and perhaps exacting; not considering that their amendment and not her own gratification prompted her to admonish. She is sensitive and is very anxious to succeed in her undertakings, but is not so sanguine as to the probability of success. She is occasionally inclined to take a gloomier view of things than perhaps the facts of the case justify; she should guard against the effect of this where her affection is engaged, for her sense of her own importance is moderate and not strong enough to steel her heart against disappointment; she has more firmness than self-reliance, and her sense of justice is of a very high order. She is deferential to the aged and those she deems worthy of respect, and possesses much devotional feeling, but dislikes fanaticism and is not given to a belief in supernatural things without questioning the probability of their existence. Money is not her idol : she values it merely for its uses; she would be liberal to the poor and compassionate to the afflicted, and when friendship calls for aid she would struggle even against her own interest to impart the required assistance – indeed, sympathy is a marked characteristic of this organisation.

Is fond of symmetry and proportion, and possesses a good perception of form, and is a good judge of colour. She is endowed with a keen perception of melody and rhythm. Her imitative powers are good, and the faculty which gives manual dexterity is well developed. These powers might have been cultivated with advantage. Is a fair calculator, and her sense of order and arrangement is remarkably good. Whatever this lady has to settle or arrange will be done with precision and taste. She is endowed with an exalted sense of the beautiful and ideal, and longs for perfection. If not a poet her sentiments are poetical, or are at least imbued with that enthusiastic glow which is characteristic of poetical feeling. She is fond of dramatic literature and the drama, especially if it be combined with music.

In its intellectual development this head is very remarkable. The forehead is at once very large and well formed. It bears the stamp of deep thoughtfulness and comprehensive understanding. It is highly philosophical. It exhibits the presence of an intellect at once perspicacious and perspicuous. There is much critical sagacity and fertility in devising resources in situations of difficulty, much originality, with a tendency to speculate and generalise. Possibly this speculative bias may sometimes interfere with the practical efficiency of some of her projects. Yet since she has scarcely an adequate share of self-reliance, and is not sanguine as to the success of her plans, there is reason to suppose that she would attend more closely to particulars, and thereby present the unsatisfactory results of hasty generalisation.

This lady possesses a fine organ of language, and can, if she has done her talents justice by exercise, express her sentiments with clearness, precision, and force – sufficiently eloquent but not verbose. In learning a language she would investigate its spirit and structure. The character of the German language would be well adapted to such an organisation. In analysing the motives of human conduct, this lady would display originality and power; but in her mode of investigating mental science she would naturally be imbued with a metaphysical bias; she would perhaps be sceptical as to the truth of Qale’s doctrine. But the study of this doctrine, this new system of mental philosophy, would give additional strength to her excellent understanding by rendering it more practical, more attentive to particulars and contribute to her happiness by imparting to her more correct notions of the dispositions of those whose acquaintance She may wish to cultivate.

One thought on “Reading The Bumps: The Brontës And Phrenology”