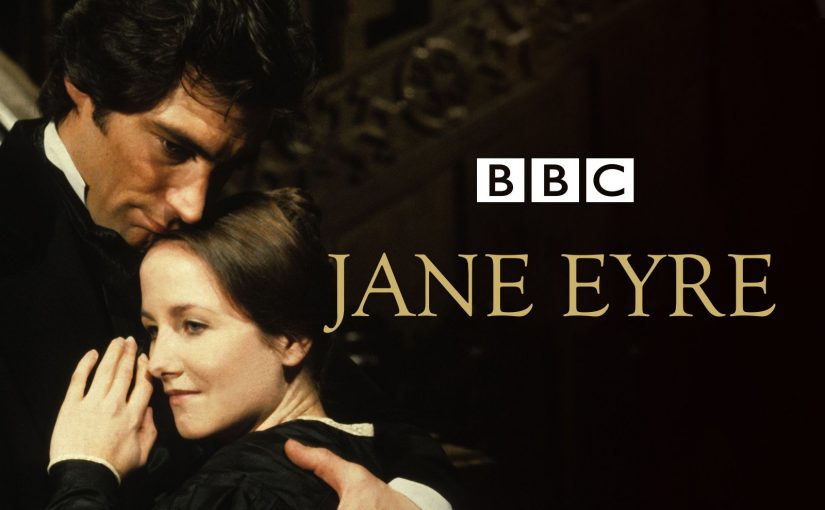 This weekend I visited Halifax to see their Gentleman Jack weekend celebrations. Suffice to say they did this excellent series proud, and Shibden Hall was filled with fans from across the world. I’ve reported previously on Emily Brontë’s possible visit to Shibden, the once home of Anne Lister, and of the many Brontë connections to the beautiful town of Halifax, but I was pleased to see that one of Shibden Hall’s very knowledgeable guides is also a guide at the Brontë Parsonage Museum in Haworth; now there’s a woman who goes the extra mile to support Yorkshire’s cultural and literary heritage!

For reasons of time, today’s post may be a little shorter than usual but I’ve decided to dedicate it to a review of a series that I’ve just finished watching: ‘Jane Eyre’, produced by the BBC in 1983. Thanks to the wonders of modern technology we can now watch many different versions of Charlotte Brontë’s brilliant tale and I’d been given this particular version as a well selected Christmas present.

I’m a huge fan of the BBC’s 2006 version of ‘Jane Eyre’ starring Ruth Wilson and Toby Stephens (who has fine form as a Brontë actor, as he also played Gilbert with aplomb in an earlier ‘The Tenant Of Wildfell Hall‘), so when I first sat down to watch 1983’s offering, it had a lot to live up to.

The first thing that caught the attention was the theme music, slow, melodic, plaintive and beautiful it perfectly prepares us for the drama ahead. The second thing a modern viewer can’t help but notice is that many of the sets look ‘stagey’ in a way that we wouldn’t expect today, so that it has an air of a theatrical production rather than relying on special effects or big budget location shots.

Another thing that grabs the viewer from the off is how faithful the script is to the words that Charlotte Brontë herself set down on the page, with the dialogue lifted almost entirely from the original novel. I’m very much in favour of this, as after all a screenwriter would have to be superb at their craft to be able to write as well as Charlotte did – although it has to be pointed out that the screenwriter on this occasion, Alexander Baron, was a master of his craft!

Two characters above all others dominate ‘Jane Eyre’ in both book and dramatised form; we are, of course, talking of Jane herself and Rochester, so these have to be correct. Some have found fault in key aspects of both of these characters in the 1983 adaptation, saying that Zelah Clarke is too old to play Jane, and that Timothy Dalton is too handsome to play Rochester. Certainly, we can scoff when Zela’s Jane keeps saying that she is in her late teens (when the actress was ten years older) or when Rochester says that he is twenty years older than Jane, or when it is pointed out that he is ugly – the two characters appear to be the same age, and nobody in fairness could say that the future James Bond was lacking in the looks department.

These could be faults that hole this adaptation below the water line, but they don’t because of the superb directing and superb acting constantly on display. Even when he’s supposedly disfigured from the fire at Thornfield Hall (oops, spoiler alert), Dalton still looks like he’s been carved very effectively and rather flawlessly out of a lump of granite, and yet when he opens his mouth I was completely taken in by his portrayal of Rochester. Gruff, bluff, argumentative, and hugely charismatic, at times frightening and at others fragile – if you’ve only seen Dalton as Bond, you’ll be amazed at the power of his performance on display here.

Zelah on the other hand, may look less like an unworldly teen than Charlotte intended, but yet again this fails to detract from her excellent performance. She delivers her words with precise pronunciation, but in her pauses we can feel the pounding passion and fierce intelligence within Jane. By the end of the series I completely believed in this Jane and rooted for her, and it is easy to see why Rochester would become so enraptured by her.

Here are all the scenes you would expect to see in a TV ‘Jane Eyre’; the cruelty at Lowood, Jane extinguishing the fire, the halted wedding and the death of Bertha. These are all done faithfully and well, but there are two scenes in particular that stand out, both of which simply see Jane and Rochester sat side by side. Firstly we see Jane’s protestations to Rochester when she thinks she is being dismissed from his service (of course he actually proposes to her): “Do you think because I am poor, obscure, plain and little that I am soulless and heartless? You think wrong! I have as much soul as you, and full as much heart! And if God had gifted me with some beauty and much wealth, I should have made it as hard for you to leave me, as it is now for me to leave you!”. The tension in the night air is palpable at the start of this same scene, as Rochester proclaims, “Are you anything akin to me, do you think, Jane? I sometimes have a queer feeling with regard to you, especially when you are near me, as now: it is as if I had a string somewhere under my left ribs, tightly and inextricably knotted to a similar string situated in the corresponding quarter of your little frame. And if that boisterous channel, and two hundred miles or so of land come broad between us, I am afraid that cord of communion will be snapped; and then I’ve a nervous notion I should take to bleeding inwardly.”

Finally, as the eleven part series ticks into its last minutes we see Jane agree to marry Rochester once more:

These scenes have practically no scenery, little action, but a profusion of beauty that still tugs at the heartstrings long after you’ve seen them – it is at these moments that you realise that Timothy Dalton and Zelah Clarke are actually perfect for their roles.

Zelah is more than suitable physically in one aspect as she is diminutive in stature, with others on screen towering over her, which is maybe why I found myself thinking she would have been perfect to portray Charlotte Brontë herself in a drama of her life. For all the fine acting, and the supporting cast is excellent as well, with particular credit I feel going to Andrew Bicknell as the obsessive St. John Rivers, it is Charlotte Brontë’s words that take centre stage and hold the spotlight brilliantly. That’s how it should be, which is why this has now firmly taken its place as my very favourite ‘Jane Eyre’ adaptation and I recommend it to you all.