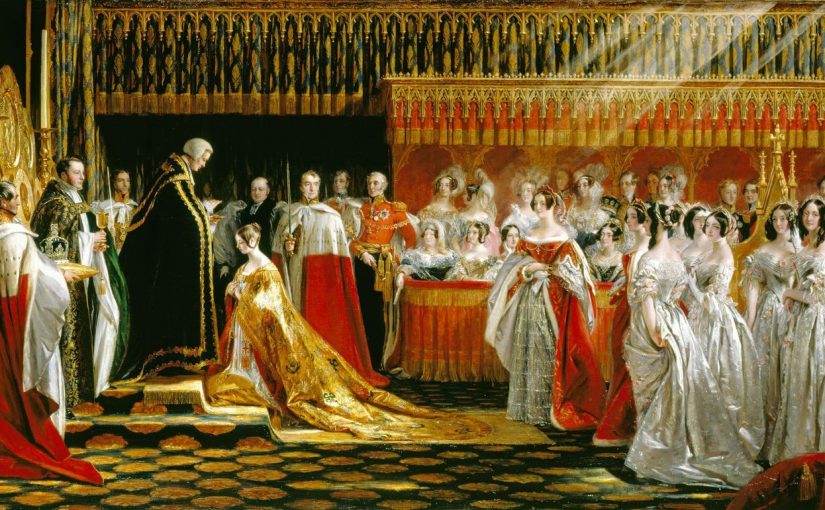 As you know, we’re in the four year ‘Brontë 200 period‘; a time when we can pay tribute to the 200th birthdays of Charlotte Brontë (2016), Branwell Brontë (2017), Emily Brontë (2018) and last but certainly not least Anne Brontë (2020). As with any celebration however, there’s always someone who tries to gatecrash it! We’ll let this particular gatecrasher off, however, as this week saw the 200th birthday of a woman who was loved by the Brontës and who had a huge impact on history: Alexandrina Victoria Hannover.

Queen Victoria (as she came to be known, of course) was born on 24th May 1819. Like many famous rulers of this country, she certainly wasn’t expected to one day wear the crown (Henry VIII was second in line, and Elizabeth I third in line at one point, as well as being declared illegitimate and barred from the official succession). Victoria was the daughter of the Duke of Kent and Strathearn, who was only the fourth son of the long serving George III. None of the elder brothers had children so on the death of the last surviving brother, William IV, in June 1837 the teenage Victoria ascended to the throne.

Whether from school lessons, history books or the hit television series, or simply because it has seeped into our national consciousness, everyone in Britain knows the broad story of Queen Victoria: how she reigned for over 60 years during which time (for good or bad) she became the figurehead of a huge empire, how she married the German Prince Albert and had a large family, and how after Albert’s death she became a mournful figure, the large woman always in black who was ‘not amused’.

Of course there is so much more to Queen Victoria than that. She was monarch during a time of incredible scientific advancement and a time of a brilliant flowering of the arts and literature. She survived eight assassination attempts, the first by a man named Edward Oxford in 1840; he fired two shots from close range at the Queen, but missed both times. Surprisingly, perhaps, he wasn’t hanged and later lived out his life in Australia, surviving into the twentieth century as did the woman he had tried to kill.

Nevertheless, Victoria was on the whole an immensely popular figure, and she certainly found favour with the children of a certain parsonage in Hathersage. The Brontës childhoods occurred in the reigns of Georges III and IV and William IV, but as they grew older they would have taken a keen interest in the royal princess who now seemed increasingly likely to become Queen one day. What made her especially interesting was that she was the same age as them, being 10 months younger than Emily Brontë and just eight months older than Anne.

We know from Charlotte that the young Brontës read, via their father, the fiercely patriotic ‘John Bull’ paper, and this will have helped fire their staunch royalism. When they decided to keep two geese as pets the choice of names is very telling: Victoria and Adelaide. Queen Adelaide was Victoria’s aunt, the wife of the late King William IV.

As Victoria’s coronation drew nearer, Emily and Anne began to incorporate it, and events surrounding the British royal family, into their tales of Gondal. In Emily and Anne’s joint diary paper of 26th June 1837, they write:

“Tabby in the kitchin – the Emprerors and Empresses of Gondal and Gaaldine preparing to depart from Gaaldine to Gondal for the coranation which will be on the 12th of July. Queen Victoria ascended the throne this month.”

Obviously reading of the spectacular coronation that their contemporary had enjoyed fired their imaginations so much that they had to recreate one in Gondal. In November 1843 one of the Brontës saw the Queen, but it wasn’t in England. Charlotte Brontë was then in Brussels approaching the end of her tenure there, when Queen Victoria made an official state visit to the young country (Belgium’s existence as an independent nation was only recognised in 1839). Charlotte reported her impressions of the monarch in a letter home to Emily:

“You ask about Queen Victoria’s visit to Brussels. I saw for her an instant flashing through the Rue Royale in a carriage and six, surrounded by soldiers. She was laughing and talking very gaily. She looked a little stout, vivacious lady, very plainly dressed, not much dignity or pretension about her. The Belgians liked her very much on the whole. They say she enlivened the sombre court of King Leopold, which is usually as gloomy as a conventicle.”

We know that the Brontës appreciation of Queen Victoria was reciprocated, or at least one of their books was appreciated. It’s on record that Victoria read ‘Jane Eyre’ in both 1858 and 1880. Her diary entries from 1858 show how much she loved it; calling it ‘that melancholy, interesting book ‘Jane Eyre’. On May 21st of that year she had reached a pivotal point in the story, “We remained up reading ‘Jane Eyre’ til half past 11. Quite creepy from the awful account of what happened the night before the marriage, which was interrupted in the church.”

The Queen’s diary of November 23rd 1880 reveals that she has read, and loved it, again:

“Finished ‘Jane Eyre’, which is really a wonderful book, very peculiar in parts, but so powerfully and admirably written, such a fine tone in it, such fine religious feeling, and such beautiful writings. The description of the mysterious maniac’s nightly appearances awfully thrilling. Mr Rochester’s character a very remarkable one, and Jane Eyre’s herself a beautiful one. The end is very touching, when Jane Eyre returns to him and finds him blind, with one hand gone from injuries during the fire in his house, which was caused by his mad wife.”

Here we see the real Alexandrina Victoria – not the stern woman of a million statues, but a person just like us who gets simple pleasures from reading a Brontë novel. Let’s remember the human behind the monarchic mask, and say ‘Happy 200th birthday Queen Victoria!’

Of course, there’s a rather less happy anniversary approaching. On this day in 1849, Anne Brontë was in Scarborough with Charlotte Brontë and Ellen Nussey. This Tuesday marks the 170th anniversary of her death. I will be there in Scarborough myself to take some flowers to her graveside. I’m staying at the Grand Hotel, on the spot of Wood’s Lodgings where Anne herself stayed, and I’ll be sending a special post from there on Tuesday morning to mark her ‘glorious sunset’; I hope you’ll join me on that day in thinking of dear Anne.