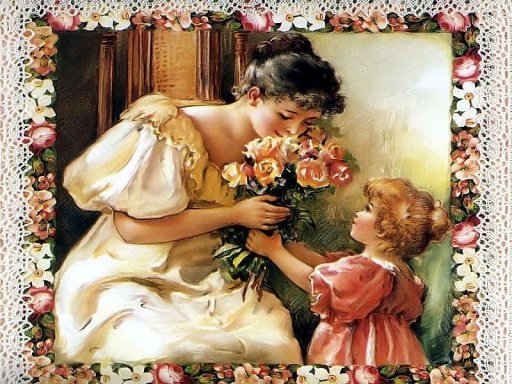 We celebrated the United Kingdom’s marking of Mother’s Day two months ago with a look at the depiction of motherhood in Anne Brontë’s great novels, and we have also rightly celebrated the life of Maria Brontë, nee Branwell, recently, who although her life was cut tragically short gave her children an abundance of love and support while she was with them.

In the United States of America, however, today is Mother’s Day, so let’s take a quick look at whether Anne herself ever dreamed of motherhood. Others may dispute it, and they’re perfectly within their rights to do so, but it’s clear in my heart that Anne Brontë and William Weightman loved each other, and if cholera hadn’t snatched this kind and brilliant clergyman away in 1842 then I believe they would eventually have married. After all, a young clergyman such as Weightman would have been expected to take a wife, and it would have been normal for him to choose one who was the daughter of a more experienced priest, such as Patrick Brontë. Anne was close to him in temperament, kindness and in depth of religious feelings, and it has been said that she was the prettiest Brontë, so to me they would have been a perfect match.

Certainly Anne’s succession of powerful mourning poetry after Weightman’s passing, and his undoubted appearance as Reverend Edward Weston in ‘Agnes Grey’ is testimony to her undying feelings for him. At the end of her first novel she, very movingly, gives herself the happy ending that real life had denied her – marriage to Weightman, and a chance to be a loving mother:

‘Our children, Edward, Agnes, and little Mary, promise well; their education, for the time being, is chiefly committed to me; and they shall want no good thing that a mother’s care can give.’

There is one other touching account of Anne’s dreams of being a mother, hidden under the guise of Gondalian characters in her poem ‘A Voice From The Dungeon’, written when she was just 17 years of age:

‘It was a pleasant summer’s day,
The sun shone forth with cheering ray,
Methought a little lovely child,
Looked up into my face and smiled.
My heart was full, I wept for joy,
It was my own, my darling boy;
I clasped him to my breast and he,
Kissed and laughed in childish glee.’

Anne Brontë would have made a wonderful mother, as her skill as governess to the Robinson children shows, and as demonstrated by the love they felt for her long after she left their service.

I dedicate this post to all the mothers out there, God bless you all for the selfless work you do and the heartfelt love you give – it certainly doesn’t go unnoticed!