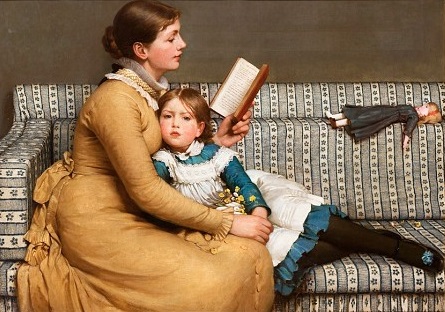 Mother’s Day has arrived here in the UK, allowing us all to pay tribute to the woman who shaped our lives forever. The Brontë children had little chance to know their mother Maria, who died in 1821 when the oldest sibling was seven and the youngest just one. Charlotte Brontë was later presented with a selection of her mother’s letters, which led her to say:

‘It was strange now to peruse, for the first time, the records of a mind whence my own sprang; and most strange, and at once sad and sweet, to find that mind of a truly fine, pure, and elevated order… There is a rectitude, a refinement, a constancy, a modesty, a sense, a gentleness about them indescribable. I wish she had lived, and that I had known her.’

Anne Brontë, the youngest of the family, would have no recollection of the mother who died when she was a one year old infant, although her Aunt Branwell became a mother figure to her. Nevertheless, Anne had strong opinions on what a mother should be and do, as we can see from references in her great novels ‘Agnes Grey‘ and ‘The Tenant Of Wildfell Hall‘.

A Mother Must Be Affectionate To Her Children

‘In my childhood I could not imagine a more afflictive punishment than for my mother to refuse to kiss me at night: the very idea was terrible.’ (AG)

A Mother Should Be Loved By Her Child

‘“Even at his age, he ought not to be always tied to his mother’s apron string; he should learn to be ashamed of it.”

“Mrs. Markham, I beg you will not say such things in his presence, at least. I trust my son will never be ashamed to love his mother!” said Mrs. Graham, with a serious energy that startled the company.’ (TTOWH)

A Mother Should Tell Stories To Amuse Her Children

‘Sometimes our mother would amuse us with stories and anecdotes of her younger days, which, while they entertained us amazingly, frequently awoke – in me, at least – a secret wish to see a little more of the world.’ (AG)

A Mother Should Be Financially Astute

‘In vain my mother assured him she was quite satisfied; and if he would but lay by a little for the children, we should all have plenty; both for time present and to come: but saving was not my father’s forte. He would not run into debt (at least my mother took good care he should not).’ (AG)

‘“By what I have done for you, you may judge of what I will do – if it be not incompatible with the higher duty I owe my son (higher, because he never forfeited his claims, and because I hope to do more good to him than I can ever do for you)”’ (TTOWH)

A Mother Should Not Spoil Her Child

‘I must beware of my own weakness too, for I never knew till now how strong are a parent’s temptations to spoil an only child.’ (TTOWH)

A Mother’s Love Is All A Child Needs

‘But this should not continue; my child must not be abandoned to this corruption: better far than he should live in poverty and obscurity with a fugitive mother, than in luxury and affluence with such a father.’ (TTOWH)

A Mother Should Risk Everything For Her Child

‘But I trust these trials are now over: I have laid him in my bed for better security, and never more, I trust, shall his innocent lips be defiled by their contaminating kisses, or his young ears be polluted by their words. But shall we escape in safety? Oh, that the morning were come, and we were on our way at last!’ (TTOWH)

Helen, the eponymous tenant of Wildfell Hall, is to us a perfect mother – she risks everything, and is prepared to withstand scorn, poverty and scandal to protect the one thing she loves more than anything in the world – her son Arthur. Anne did not have far to look for an example of a woman like that – for she had one in her very own family, a woman who escaped her husband’s clutches and started a new life as a single mother with her daughter. That’s a tale for another day and another post!

As we can see from her writings, Anne Brontë would have been a loving and affectionate mother, and she also had practical experience of raising children thanks to her governess roles. It’s the most important job of them all, so to mothers everywhere, I wish you a very happy and healthy Mothering Sunday!