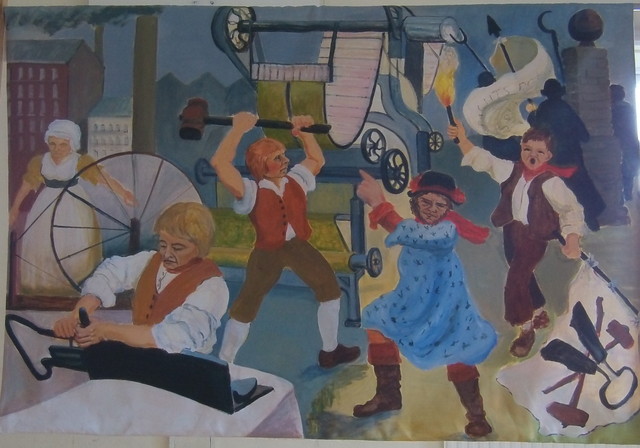 Shirley was Charlotte Brontë’s magnificent third novel (although it was only her second to be published), and it’s of particular interest to fans of Anne Brontë. It’s well known that Charlotte used many real people, events and locations in the novel, barely disguised under other names. Her great friend Mary Taylor, for example, is Rose Yorke. Briarmains in Shirley is the Taylor house at Gomersal. Miss Wooler, former teacher of Charlotte and Anne, is called Mrs. Pryor. The curates Malone and Macarthey are both based to some extent on Charlotte’s future husband Arthur Bell Nicholls. The book centres around the earlier Luddite struggles, which was a mask for the Chartist struggles that were still raging.

It is in the two protagonists, however, that we take most interest. The titular Shirley (the first time it had ever been used as a woman’s name) is based upon Emily Brontë. Mrs Gaskell, in her famous biography of Charlotte, says that Charlotte explained that her portrayal of Shirley Keeldar is “what Emily Brontë would have been, had she been placed in health and prosperity.” Whilst Shirley is given the title, she does not appear until a third of the way through the book. The real heroine is the parson’s niece Caroline Helstone, and this is undoubtedly a portrait of her other sister Anne. Whilst writing the novel, tragedy struck Charlotte and her family, and it is this that makes Shirley such a beautiful and very moving read. In next week’s blog we’ll take a look at one particular chapter in the novel that touches very strongly on one particular instance of Anne’s life and death, and how it changed the course of the novel Charlotte was writing. This week, we’ll look at quotes that show how, under the cover of fiction, Charlotte revealed her often hidden love and admiration for her sister, and depicted moments from Anne’s life. We’ll begin by looking at descriptions of Caroline’s appearance.

“To her had not been denied the gift of beauty. It was not absolutely necessary to know her in order to like her; she was fair enough to please, even at the first view. Her shape suited her age: it was girlish, light, and pliant; every curve was neat, every limb proportionate; her face was expressive and gentle; her eyes were handsome, and gifted at times with a winning beam that stole into the heart, with a language that spoke softly to the affections. Her mouth was very pretty; she had a delicate skin, and a fine flow of brown hair, which she knew how to arrange with taste; curls became her, and she possessed them in picturesque profusion… The little collar round her neck lay over a pink ribbon, and was fastened with a pink knot. She wore no other decoration.”

“She is nice; she is fair; she has a pretty white slender throat; she has long curls, not stiff ones – they hang loose and soft, their colour is brown but not dark; she speaks quietly, with a clear tone; she never makes a bustle when moving; she often wears a gray silk dress; she is neat all over.”

These descriptions match nicely with what we know of Anne, the pretty, delicate, quiet young woman with hair that was browner and curlier than her sisters. Yet, on some occasions early in the novel, Caroline is described with brown eyes, whereas we know that Anne was the only Brontë with blue eyes:

“But for the soft expression of her brown eyes, the delicate lines of her features, and the flowing abundance of her hair, she would no longer have possessed a claim to the epithet pretty.

‘What on earth is the matter with you?’ he asked. ‘What is wrong? How are you ailing?’

No answer; only the brown eyes filled, the faintly-tinted lips trembled.”

As we shall see in the next blog however, at the moment when Charlotte closely reveals the details leading to Anne’s death, she describes Caroline as having blue eyes.

Anne was the most pious of the sisters, and the one who thought most deeply about religion. Throughout her life she had moments of grave doubt about the nature of faith, and often worried that she would go to Hell. Charlotte became particularly conscious of this, and gives Caroline too moments of mental and physical torment.

“Yet I must speak the truth. These efforts brought her neither health of body nor continued peace of mind. With them all she wasted, grew more joyless and more wan… Winter seemed conquering her spring; the mind’s soil and its treasures were freezing gradually to barren stagnation.”

“‘I think I grow what is called nervous. I see things under a darker aspect than I used to do. I have fears I never used to have – not of ghosts, but of omens and disastrous events; and I have an inexpressible weight on my mind which I would give the world to shake off, and I cannot do it.'”

Anne As A Governess

We know, of course, that Anne became a governess twice, and was the only sister who held down jobs for any length of time. At the age of eighteen she had to persuade her family to let her become a governess, and Charlotte reflects this exact same yearning in Caroline at exactly the same age:

“But one project could she frame whose execution seemed likely to bring her a hope of relief: it was to take a situation, to be a governess; she could do nothing else.”

“‘The fact is, you don’t know precisely what you want.’

“‘I wish it fifty times a day. As it is, I often wonder what I came into the world for. I long to have something absorbing and compulsory to fill my head and hands and to occupy my thoughts.'”

“‘Mrs. Pryor, I should like to go from home, but not on any purposeless excursion or visit. I wish to be a governess.'”

Anne’s Timidity And Work As A Sunday School Teacher

We know that Anne was naturally very shy, but she worked to overcome it. We know also that she taught at Haworth’s new Sunday school, as did her siblings, with one former pupil recollecting that she was his favourite teacher as she was ‘the prettiest and most serious’. These too are reflected in the Caroline of Shirley:

“Not naturally very confident, a failure of physical strength and a depression of spirits had not tended to increase Caroline’s presence of mind and ease of manner, or to give her additional courage to face strangers.”

“She was always held back by the idea that people could not want her, that she could not amuse them.”

“Miss Helstone knew these girls liked her, yet she was shy with them even outside of school. They were not more in awe of her than she of them… Her knowledge commanded their esteem when she taught them; her gentleness attracted their regard; and because she was what they considered wise and good when on duty, they kindly overlooked her evident timidity when off.”

Anne and Emily were incredibly close to each other, with Ellen Nussey describing them as acting like twins. It is especially moving, therefore, to see the close bond that Charlotte gives between Caroline and Shirley, the depiction of the two sisters she would lose forever while she was writing the novel.

“Caroline’s instinct of taste, too, was like her own. Such books as Miss Keeldar had read with the most pleasure were Miss Helstone’s delight also. They held many aversions too in common, and could have the comfort of laughing together over works of false sentimentality and pompous pretension.”

“Caroline, she found, felt the value of the true ore, and knew the deception of the flashy dross. The minds of the two girls being toned in harmony often chimed very sweetly together.”

“‘I am a blind, weak fool, and you are acute and sensible, Shirley. I will go with you; I will gladly go with you!’

‘I do not doubt it. You would die blindly and meekly for me…’

Caroline rapidly closed shutter and lattice. ‘Do not fear that I shall not have breath to run as fast as you can possibly run, Shirley. Take my hand. Let us go straight across the fields.’

‘But you cannot climb walls?’

‘You are afraid of hedges, and the beck which we shall be forced to cross?’

There can be no doubt that in Caroline, Charlotte Brontë was depicting her sister Anne, relaying things she had heard her say, things she had seen her do. Nowhere is this more evident that in chapter 24 of the book, a chapter we shall look at in the next instalment of this blog, entitled ‘The Valley of the Shadow of Death‘. This incredibly moving chapter gains even more force when you realise that when Charlotte commenced work on ‘Shirley’ her sisters were in full health, and talking about their work around the table at night as was their habit. By the time Charlotte reached chapter 24, she was the only Brontë child left. It was to have a profound effect on the chapter, and on the book to come.

What would Anne have thought of her sister writing so candidly about her? She would have borne it with her characteristic courage. After all, as Caroline Helstone says:

“Do not be afraid of offending me. I always like the truth.”

Muriel Spark and the Brontë Diet
Folklore, Faeries And The Brontë Novels
The Secret Poetry Manuscript Of Emily Brontë