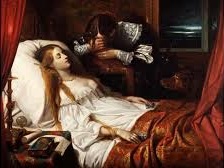 Anne Brontë’s work was frequently autobiographical, but we can also turn to another work of fiction for information about her looks, beliefs, and life: ‘Shirley’ by her sister Charlotte Brontë. In it, she includes veiled portraits of many people and places she knew, most notably Emily Brontë as Shirley Keeldar and Anne Brontë as Caroline Helstone. She also gives detailed information on Anne’s death in a chapter that must have been incredibly difficult for Charlotte to write, and is perhaps the most moving chapter ever written under the guise of fiction; it’s chapter 24 of Shirley: ‘The Valley of The Shadow of Death’.

Charlotte began writing Shirley in 1848, at what was a time of happiness for the Brontës, even though they were having to cope with the increasingly unpredictable behaviour of their drink and drug addicted brother Branwell. Jane Eyre had become a huge success, Anne had completed her second novel, The Tenant Of Wildfell Hall, and while Emily was enjoying baking bread and carrying out domestic duties, as always there was no way of telling what she may be working on in private. For three happy sisters, still walking around their table at night discussing their plans as they had at children, it was impossible to see what was soon to befall them.

After Anne and Charlotte returned from a journey to London in July 1848, one by one the family started to fall ill. The weakened Branwell was the first to succumb, dying of tuberculosis on September 24th 1848. Emily, who had often nursed him, soon showed the same terrible symptoms but stubborn to the last refused all help. She died of tuberculosis on December 9th 1848. To Charlotte’s horror, it was then Anne’s turn to contract the disease. Charlotte was determined to save her only remaining sibling, but it was to no avail, and tuberculosis claimed her on May 28th 1849.

Throughout these dreadful eight months, work on Shirley had stopped. After Anne’s death, Charlotte, always prone to bouts of melancholy, fell into a heavy depression, but eventually she found the courage to resume her half finished novel. Chapter 24 was to provide a real test of Charlotte’s courage as a writer, and as a human. She had originally planned for Caroline, the real heroine of the novel rather than Shirley, to die in this chapter, and in it she gives details of how Anne stoically faced her final illness.

The first sign of the illness comes on rapidly. Caroline, by which of course we can read Anne, walks home feeling well one night, but for the next two days she suddenly finds herself unable to eat:

“‘Am I ill?’ she asked, and looked at herself in the glass. Her eyes were bright, their pupils dilated, her cheeks seemed rosier, and fuller than usual. ‘I look well, why can I not eat?’

She felt a pulse beat fast in her temples; she felt, too, her brain in strange activity. Her spirits were raised; hundreds of busy and broken but brilliant thoughts engaged her mind. A glow rested on them, such as tinged her complexion.

Now followed a hot, parched, thirsty, restless night. Towards morning one terrible dream seized her like a tiger; when she woke, she felt and knew she was ill.”

The inability to eat continues, but there are no other symptoms other than a fever, and people hope and think that she will soon change for the better. That change doesn’t come. Whilst her uncle and Mrs Pryor, her attendant, still believe that this could be a passing illness, Caroline herself knows that she is dying. It is at this point that she again questions her faith, questions what is waiting for her, and calls out to God:

“‘Where is the other world? In what will another life consist? Why do I ask? Have I not cause to think that the hour is hasting but too fast when the veil must be rent for me? Do I not know the Grand Mystery is likely to burst prematurely on me? Great spirit, in whose goodness I confide, whom, as my Father, I pave petitioned night and morning from early infancy, help the weak creation of Thy hands! Sustain me through the ordeal I dread and must undergo! Give me strength! Give me patience! Give me – oh, give me faith!'”

This trial of spirit as the end approaches mirrors what Anne herself went through, as shown by her final poem ‘Last Lines’, which begins with dreadful doubts, was put aside, and finally completed in a spirit of acceptance and faith.

Charlotte also reveals the horror of having to listen to a loved one’s insensible, delirious ramblings as tuberculosis enters its final stage:

“Caroline, opening her eyes from a moment’s slumber, viewed her nurse with an unrecognizing glance.

‘I smelt the honeysuckles in the glen this summer morning,’ she said, ‘as I stood at the counting-house window.’

Strange words like these from pallid lips pierce a loving listener’s heart more poignantly than steel. They sound romantic, perhaps, in books; in real life they are harrowing.”

Eventually Caroline’s senses return, and finding that it is only nine o’clock, says she has a long night ahead of her. She asks her nurse, Mrs. Pryor, to sing ‘Our God, our help in ages past’ to her. She then asks her to sing a Scottish song to her, but overcome with tears Mrs. Pryor can go nor further:

“‘You are weeping at the pathos of the air. Come here, and I will comfort you,’ said Caroline, in a pitying accent. Mrs. Pryor came. She sat down on the edge of her patient’s bed, and allowed the wasted arms to encircle her.

‘You often soothe me; let me soothe you,’ murmured the young girl, kissing her cheek. ‘I hope’, she added, ‘it is not for me you weep?'”

When writing these lines, we surely know that Charlotte had in mind Anne’s death scene she had witnessed just weeks earlier in Scarborough, a scene we have full details of thanks to a memoir by their friend Ellen Nussey, who was also present. Anne herself was serenely calm, but the silence was broken by Charlotte’s sudden weeping. In her final moment Anne seeks to soothe her sister, and with her last words tells her, ‘take courage, Charlotte, take courage!’

In the midst of this chapter Charlotte now faced a searing dilemma. Could she let Caroline die, as the original plan had been when she commenced the novel at a time when they were both in full health, just as she had seen Anne die? No, it could not, would not, be. She had been unable to save her in real life, had lost ‘one for whom I would have died to save’ as Charlotte wrote in a touching elegy to Anne. In her novel, at least, she could save her, and she did.

“‘I believe grief is, and always has been, my worst ailment. I sometimes think if an abundant gush of happiness came on me I could revive yet.’

‘I have no object in life.’

Charlotte then gives Caroline an object in life, a reason to live. Mrs. Pryor reveals herself to be Caroline’s mother, the mother who Caroline lost as a baby just as Anne had lost her own mother Maria as a one year old.

A miracle happens. Caroline does not die that night, and with her new found mother’s help begins to eat again. The disease passes and Caroline regains full health. She has passed through the shadow of the valley of death, but unlike Anne she has come out of the other side.

At the chapter’s end, Mrs. Pryor “wrestled with God in earnest prayer”. At the opening of the next chapter, Charlotte reveals the agony she herself went through as Anne had hovered between life and death:

“Not always do those who dare such divine conflict prevail. Night after night the sweat of agony may burst dark on the forehead; the supplicant may cry for mercy with that soundless voice the soul utters when its appeal is to the Invisible. ‘Spare my beloved’, it may implore. ‘Heal my life’s life. Rend not from me what long affection entwines with my whole nature. God of heaven, bend, hear, be clement!’ And after this cry and strife the sun may rise and see him worsted. That opening morn, which used to salute him with the whisper of zephyrs, the carol of skylarks, may breathe, as its first accents, from the dear lips which colour and heat have quitted, ‘Oh! I have had a suffering night. This morning I am worse. I have tried to rise. I cannot. Dreams I am unused to have troubled me.’

Then the watcher approaches the patient’s pillow, and sees a new and strange moulding of the familiar features, feels at once that the insufferable moment draws nigh, knows that it is God’s will his idol shall be broken, and bends his head, and subdues his soul to the sentence he cannot avert and scarce can bear.”

As the next paragraph reveals, ‘Happy Mrs. Pryor’ did not face this, but a revived Caroline. For Charlotte herself, of course the outcome with three of her siblings in the previous year had been very different.

As if further proof was needed that Charlotte has painted Anne’s dying days, there is one very telling clue. In the previous blog, I showed how Caroline’s physical description very closely matches that of Anne, but for one point: on three occasions she is mentioned as having brown eyes, when we know that Anne was the only Brontë child to have blue eyes. See how Charlotte, with Anne’s vision and suffering so clearly etched in her imagination as she writes, describes Caroline now:

“Papa, my darling, gave you your blue eyes and soft brown hair; he gave you the oval of your face and the regularity of your lineaments.”

It is easy to remember how Charlotte often seemed to belittle Anne, and to think of how she damaged her reputation by preventing the republication of The Tenant Of Wilfdfell Hall, but in the portrayal of Caroline in Shirley, she shows how much she had always loved her, and how deeply she felt her loss.

A Brontë Halloween: Mrs Baines' Ghost
The Brontës And The Theatre
Elizabeth Gaskell's Moving Letter On The Brontës