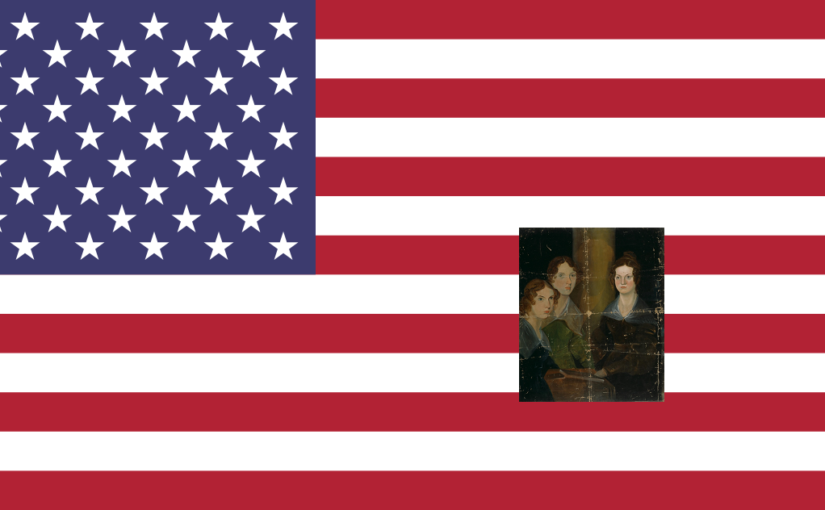 Last Saturday was the fourth of July, a day when the United States of America celebrates its national holiday marking the day in 1776 when thirteen colonies declared their independence from England. There’s little doubt that many Americans are among the most passionate Brontë enthusiasts, so today we’re going to take a look at the Brontës in America.

Of course the Brontës themselves, unsurprisingly at that time, never made it to the United States, but there are a number of interesting connections. Let’s start with the ridiculous and journey on to the sublime. Anne Brontë’s first job as governess was for the Ingham family of Blake Hall in Mirfield, in the West Riding of Yorkshire, and anyone who has read of the Bloomfield family in Agnes Grey will know how difficult her task was.

Anne left her employment at Blake Hall in late 1839, but the Hall remained an imposing presence in Mirfield until the 1950s when it was demolished to make way for a new housing estate, with its once exalted fixtures and fittings sold off piece by piece in auctions that attracted bidders from across the world. Perhaps the architectural highlight of the hall was its grand central staircase, and this was bought by an Allen Topping of Long Island, New York. Topping was fabulously wealthy with money no object (think ‘Jay Gatsby’), so he paid for the Blake Hall staircase to be dismantled, shipped to America and then reassembled in his own mansion.

In 1962 Allen’s widow reported seeing a ghostly lady descend the staircase dressed in Victorian garb including a long shawl. Mrs Toppings’ dog started barking but when she comforted the dog, the figure smiled at her. This spectral figure was then seen on a number of occasions, and Mrs Topping sensed that it was the ghost of Anne Brontë. Whether Anne did become the only Brontë to make it to the United States, I leave you to decide.

Anyone who has visited Haworth will be in no doubt how popular it, and the Brontës, are with book lovers from across the pond. American tourists are the lifeblood of Haworth, and I know that their presence will be warmly welcomed once things return to something akin to normal again. One particular American is very important to the Brontë Parsonage Museum story: Henry Bonnell.

During the latter decades of the nineteenth century many Brontë relics ended up in the United States, by legitimate and sometimes less than legitimate, means, and Bonnell was foremost among the legitimate Brontë collectors. He had worked in publishing and made a considerable fortune which he invested in Brontë writing, art and memorabilia. After his death in Philadelphia in 1926, he left his entire collection to the Brontë Society, and his bequest made up a large part of the collection of the Brontë Parsonage Museum when it opened two years later. Many of the exhibits you will see when the museum re-opens (which should hopefully be soon) came from Bonnell, and the exhibition room next to the shop is now named after him.

As we know, the Brontës never travelled to America (we’re not counting ghosts) but a very close relative did. Their Aunt Jane, elder sister of their mother Maria and their Aunt Branwell, emigrated to Baltimore in Maryland in 1808 with her husband John Kingston and three children (she was also heavily pregnant at the time). John had been a Wesleyan minister, but had been defrocked after being found guilty of infidelity and theft. With his good name gone, he decided to start a new life in the new world (he’d previously served as a missionary in Baltimore) but things must have gone from bad to worse, for in April 1809 Jane sailed from New York with her new baby daughter Eliza, leaving her husband and elder children behind in America.

I think this bold move marks Aunt Jane as the precursor of Helen, the eponymous tenant of Wildfell Hall. American-born cousin Eliza was later given a quarter of Elizabeth Branwell’s bequest, along with Charlotte, Emily and Anne Brontë, but it’s another of Jane Kingston’s children who is of particular interest to us on this occasion.

The family line of the Branwells of Penzance, cousins of the Brontës, died out completely in England in 1964 with the death of Patrick Arthur Brontë Branwell. The Branwells were gone from England, but they weren’t gone completely. Anna Branwell Kingston was born to Jane Kingston (nee Branwell) and the Reverend John Kingston in 1803, and sailed with them for Maryland in 1808. She had to stay with her father when her mother returned to Cornwall, but she later married a man named Joseph Bergstresser (a native of Pennsylvania, like Henry Bonnell). Mirroring the path the Brontës took, the Bergstressers changed their name to hide their roots and became the Burgsters.

Anna had a daugher, Maria Louisa and a son Joseph Kingston, whose family line is also now extinct. Maria, however, married Jacob Horning. They had a daughter Lottie Bell Horning (was Bell used as an indicator of their Brontë connections?) who married a William Fagen. Ada Louise Fagen was born in 1889 and married Thomas Hester, whilst Percy Horning Fagen was born in 1899 and married Athalene Kane. The lines of descent from these two children, first cousins of the Brontës three times removed, are still going strong.

I have managed to find nine such descendants, including an infant who will carry on this lineage to another generation, in various locations across the United States. Some of them have remarkable stories of their own, including a veteran of the Vietnam War, a leading pathologist, and a man whose wife survived a mass shooting. I have attempted to contact them but, alas, I received no replies. I will have to respect their privacy of course, but the fact remains that these people are the closest living maternal relatives of the Brontës in the world today – so, in a sense, there really are Brontës in America.

Genealogy is fascinating, but there isn’t much that’s as fascinating as a good Brontë book. Have a great week, stay happy and healthy, and I’d be delighted if you could join me again next Sunday for another new Brontë blog post.