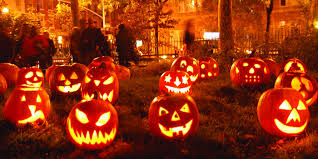 Halloween in Haworth is a wonderful time, with the village decorating itself out in spooky garb before the weekend culminates in its famous dragon parade. Once again, there’s a similarity between Haworth and Penzance, as the Cornish town from which mother of the siblings Maria Brontë hailed also loves to hold parades that pay tribute to a more esoteric side of life – like the spectacular Montol festival held to celebrate the Winter Solstice.

Aunt Branwell, a second mother to the Brontës in all but name after arriving at Haworth parsonage in 1821, loved to tell stories of her native Penzance, and one such story must have been that of Mrs. Baines – a ghostly tale fit for any Halloween! Incidentally, I was lucky enough to give a talk in Penzance earlier this year, and the audience all knew the story of the Baines ghost; they could even pinpoint the location on which it took place! If you’re not too scared of ghosts, on one day at least, gird your loins, pull your shawl round your shoulders and read on as we stroll back to Penzance in 1803 and examine the tragic tale of Mrs. Baines, the rich widow of a Captain Baines, who lived at 20 Chapel Street. I will let the nineteenth century Cornish chronicler William Bottrell relate what happened next:

‘Mrs. Baines’s orchard, a pleasant spot, in which the lady took great delight, was stocked with the choicest apple, pear, plum, and other fruit trees then known. The town boys soon found out the fine flavour of Mrs. Baines’s fruit, which was to them all the sweeter for being stolen. When the apples were ripe and most tempting, the mistress and her serving-man watched the garden by turns – the man during the first part of the night, and madam would descend in her night-dress, every now and then, to see that all was right, in the small hours of morning. One night Mrs. Barnes, suspecting that man John was rather careless in keeping guard, sallied forth to see if he was attending to his duty; and, not finding him anywhere about the garden, she went to a tree of highly-prized apples and shook down a good quantity, intending to take them away, and thus prove to John that, through his remissness, the fruit was stolen. But her man Jan, armed with an old blunderbus, charged with peas and small shot, was at no great distance dozing under a hedge. The rustling of shaken branches, and noise of falling apples, awoke him, and, seeing somebody, as he thought, stealing apples from their favourite tree, he up with his gun and let fly at his mistress, exclaiming, at the same time, ” Now you thief, I’ve paid ‘e off’ for keeping me out of bed to watch ‘e! I know ‘e, I do, and will bring ‘e before his worship the mayor to-morrow!” “Lord help me, I’m killed!” cried the lady, as she fell on the ground.’

The new owners of the property called in a priest named Singleton to exorcise this property, giving the story of Mrs. Baines its truly bizarre end:

It is a fascinating story to us today, but to the Branwells of Penzance it must have seemed very real – after all, they may have been involved in it themselves. The widow Baines and her orchard were at 20 Chapel Street, whereas Elizabeth and her family lived at 62 Chapel Street, which was almost opposite the property. Certainly we can imagine the head of the household Thomas Branwell racing to his neighbour when he heard the night time gunshot, but what of the local children who liked to take the old woman’s sweet apples? Could they in earlier days have included Maria Branwell, who went on to become mother of the Brontës, or younger sister Charlotte Branwell, just 14 at the time of the tragedy, after whom Charlotte Brontë was named?

The locals avoided the Baines property in fear of seeing her hen like ghost, but Elizabeth and Maria Branwell would have often had no choice but to walk past it. In later years, Aunt Branwell related this story to her enthralled nieces and nephew. Parsonage servant Tabby Ayckroyd‘s storytelling is often credited for its influence on the Brontës, but equally important were the stories from Aunt Branwell – in the ghost of Mrs. Baines, for example, we can see a prototype of the ghostly nun of Villette:

‘A sudden bell rang in the house—the prayer-bell. Instantly into our alley there came, out of the berceau, an apparition, all black and white. With a sort of angry rush—close, close past our faces—swept swiftly the very NUN herself! Never had I seen her so clearly. She looked tall of stature, and fierce of gesture. As she went, the wind rose sobbing; the rain poured wild and cold; the whole night seemed to feel her’

When you turn off your light tonight, or blow out the last candle in the last pumpkin, don’t look out of the corner of your eyes, don’t listen to that strange door – and whatever you do, don’t step onto the landing! The veil between our world and previous worlds is thin tonight, but when you read Brontë novels it’s never a trick, and always a treat!