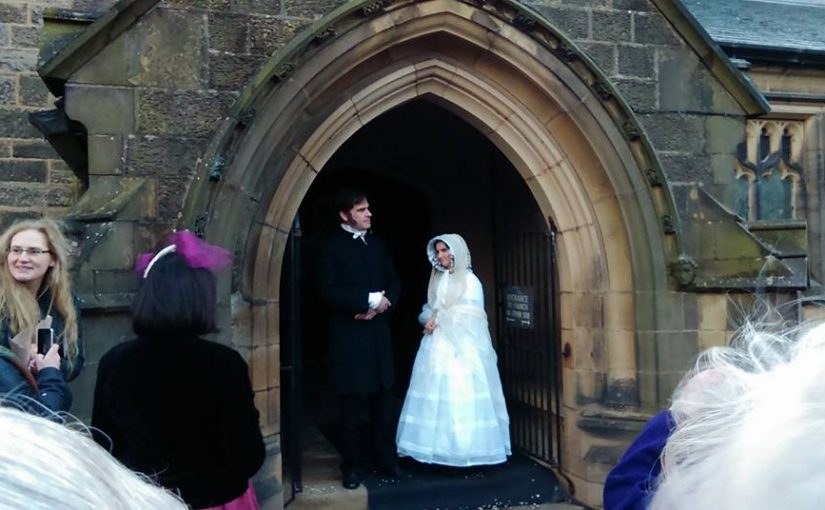 June the 29th was a momentous day for Charlotte Brontë at both ends of her life – and for two very different reasons. In 1816 it was the day that she was baptised, whilst in 1854, sadly just a year before her untimely death, it was the day she married.

Charlotte’s baptism took place in the village of Thornton, just over two months after her birth – and there often seems to be a gap between the birth of the Brontë children and their baptisms. It was not at the grand church of St. James that can now be seen at the Thornton but directly opposite it, at what is now known as the Bell Chapel. It is now a ruin, but thanks to local activists a beautiful one.

Presiding over the baptism was Patrick Brontë’s great friend William Morgan, and acting as Charlotte’s godparents were Reverend Thomas Atkinson and his fiance Frances Walker of Lascelles Hall. These two were very instrumental in the Brontë story, as Atkinson was the former curate of Thornton who had suggested to Patrick that they swap parishes (leaving Atkinson with the smaller and less remunerative parish of Hartshead) so that he could be closer to Frances, the woman he loved.

It has been conjectured that Charlotte’s other godmother could have been her aunt Charlotte Branwell, Maria’s younger sister still living in Penzance, for after all another sister was made godmother to the second Brontë sibling who was given her name – Elizabeth. Charlotte Branwell certainly didn’t travel to the ceremony, but Elizabeth Branwell did make the long journey from Penzance to Thornton for the baptism of her niece Elizabeth, and stayed on at Thorton for a year afterwards. She would make another, final, journey north and re-enter the lives of the siblings in 1821 as Aunt Branwell.

None present on that June day in 1816, of course, could have known what the future would hold for the baby in front of them, one of tragedy but also of incredible achievement and triumph, and nor could they have known that another momentous day in Charlotte’s life would come exactly 38 years later.

The wedding took place at eight o’clock in the morning on 29th June 1854, and one important man was not to be there. At the last moment Patrick said that he felt too ill to attend, although we’ll never know if this was true or if he was still harbouring some resentment at the marriage itself. Margaret Wooler stepped into the breach and it was she who gave Charlotte away, with Reverend Sutcliffe Sowden, a great friend of Arthur, conducting the ceremony.

To Charlotte’s great surprise she fell in love with her new husband, and on Christmas Day 1854 wrote to Ellen of how happy they were together. It was not to last. Charlotte fell pregnant, but was struck down by extreme morning sickness, then a frequently fatal condition in those days before drips, and died on March 1st 1855.

One thought on “29th June: A Life Changing Date For Charlotte Brontë”