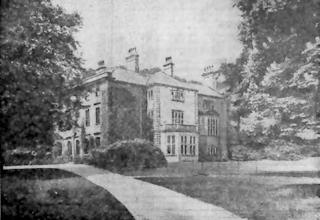 In last week’s blog we looked at Anne’s school days at Roe Head in Mirfield, in the West Riding of Yorkshire, but her association with the town doesn’t end there. She left Roe Head towards the end of 1837 (we don’t know the exact date), but on April 8th 1839 she was back in Mirfield – and this time she meant business!

Her family would have expected delicate, little Anne (as they thought of her) to stay safely at home in Haworth after a serious illness had forced her departure from school, but she had other plans. She very much enjoyed the company of her family, especially Emily, but she was determined that she should make her own way in life – she wanted to show people that Anne Brontë wasn’t as helpless as they seemed to believe.

It was a shock to them, then, when Anne told her family that she wanted to take a position as a governess. It soon became clear that she would not change her mind, she could be as stubborn as Charlotte or Emily when she wanted to be, and so the search began for a suitable position.

It seems likely that Anne’s old headmistress Miss Wooler was asked for advice, for she arranged for Anne to fill a position as governess to a family well known to her: the Ingham family of Blake Hall, Mirfield.

The Inghams were the wealthiest family in Mirfield, and as mine and mill owners the industrial revolution meant that their wealth was growing. They also lived in the largest house in the town, the large and imposing square shaped Blake Hall.

Anne was just nineteen when she arrived at Mirfield, harbouring dreams of finding well behaved children who were eager to learn. The reality was somewhat different. She had stumbled into a job as governess for children who were unruly at best, and something akin to evil at the worst. In a letter to Ellen Nussey, Charlotte would adroitly describe the Ingham children as ‘desparate little dunces’.

At the time of Anne’s arrival at Blake Hall, her charges were Cunliffe, aged 6, Mary, 5, Martha 3, and Emily aged 2; there was also a baby called Harriet. Their parents were Joseph and Mary Lister, and although they were keen on providing an education for their children that would allow them to go to boarding schools later in life, they would not allow any sort of discipline to be used on them. Despite previous governesses having tried their best, Anne was shocked to find that the children had little idea of the alphabet, virtually no knowledge of any subject at all, and were most unwilling to sit still and take lessons.

Anne’s time as governess to the Inghams was one of perpetual struggle. The children would refuse to sit still, and when she succeeded in making one sit in their chair, another would begin to run around. Sometimes they would roll on the floor screaming until their parents came in, at which point it would be Anne rather than the child who would be chastised. They would sometimes spit at Anne, or in her bag, or throw her belongings out of the window.

Whilst this was traumatic for Anne Brontë, the painful memories would lead directly to her first novel Agnes Grey, and the horrors she experienced at Mirfield are replicated in its pages. The Inghams were recreated as the Bloomfield family, just as the Robinsons she worked for later would become the Murrays of the novel. Blake Hall was renamed Wellwood House, and Cunliffe becomes the wicked Tom Bloomfield who loves nothing more than setting traps for animals and torturing birds.

At one point Cunliffe has a nest of young birds, and he tells Agnes how he plans to torture them. Agnes takes a large stone and drops it on the nest, killing it instantly. If this is taken from real life, then we can imagine how painful it must have been for the animal loving Anne.

There can be little doubt that, whilst it is a work of fiction, Agnes Grey the novel does contain many scenes taken from Anne’s own experiences at Blake Hall and at Thorp Green. Apart from the many instances in the novel that have an obvious parallel in real life, we have letters from Charlotte to back up some of the scenes in the novel. For example, Agnes says: ‘A good birch rod might have been serviceable; but as my powers were so limited, I must make the best use of what I had.’ Charlotte writes, talking of Anne’s reports from Blake Hall: ‘The worst of it is that the little monkies are excessively indulged, and she is not empowered to inflict any punishment.’

Indeed, Anne herself, in her preface to the second edition of the Tenant of Wildfell Hall, defended herself against accusations that some of the wild scenes in the Bloomfield section of the book were false:

‘The story of Agnes Grey was accused of extravagant over-colouring in those very parts that were carefully copied from the life, with a most scrupulous avoidance of all exaggeration.’

Anne Brontë was finally dismissed from the role of governess to the Ingham family in December 1839, with the parents unhappy at the lack of educational progress made by their children under her tuition. Given their character and abilities, however, she had done well to last for as long as eight months.

So what became of the Inghams? We know that Cunliffe and Mary as adults were both notorious for their vile tempers, although Cunliffe channelled his by becoming an officer in the army and serving in the Crimean war.

We also have a definitive account of an instance when Anne finally lost her patience with her charges. The story was told by Mary Ingam, mother of the children, to her grandaughter Gertrude Elizabeth Brooke, who in turn published it in the Mirfield parish church magazine:

‘One day grandmother, Mary Ingham, went into the schoolroom and found two of her children tied to opposite table legs while Anne wrote.’

The Ingham family went into decline, and the imposing and now old Blake Hall became too expensive to maintain. It was demolished in the 1950s, but the place where it stood in Mirfield is now home to the Blake Hall Estate centred upon Blake Hall Drive. Running off in one direction from this long, broad avenue are Ingham Garth, Ingham Close, and Ingham Croft, while to the south of the road are Brontë Close, Brontë Grove, and Brontë Way.

Mirfield hasn’t forgotten its connections with the brilliant writer who learned and taught there, but in death, as in life, Anne Brontë and the Inghams are on opposite sides of the divide.