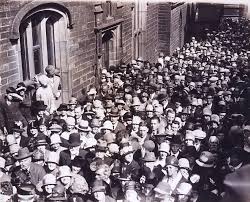 On 5th August 1928 the Brontë Parsonage Museum opened it’s doors for the very first time. In the near nine decades since then, the collection has expanded enormously, and visitors continue to pour in from around the world to hear the fascinating stories of the writers they adore: Charlotte, Emily, and Anne Brontë!

Patrick Brontë, his wife Maria, and their six children (Maria, Elizabeth, Charlotte, Patrick Branwell, Emily Jane, and Anne) arrived at the Parsonage of St Michael’s & All Angels church, Haworth on 20th April 1820. Little Anne, the adored baby of the family, was just three months old. Tragically, Maria, the mother, was to die there just a year later. Within a few more years the eldest children Maria and Elizabeth also died there of tuberculosis contracted at their Cowan Bridge School.

As we all know, that wasn’t the end of the sadness at the Parsonage, with Branwell, Emily and Anne all dying within a nine month period spanning 1848 and 1849, although Anne had left Haworth for Scarborough in the days leading up to her death. Charlotte, the last remaining Brontë child, died in 1855 from complications brought on by morning sickness.

There was certainly tragedy at the Brontë Parsonage, but there was fun, joy, and triumph too. Particularly in their youth, the three sisters were very close to each other and to their brother and they delighted in their home and the moors surrounding it. It is here of course that some of the greatest books ever written were penned, including The Tenant of Wildfell Hall, Wuthering Heights, and Jane Eyre.

Patrick Brontë died at the Parsonage in 1861, having served the people of Haworth for over 40 years and outlived all his family. He was immensely proud of the achievements of his daughters, and already by this time their fame was beginning to spread. Upon his death his effects, including many items which belonged to his daughters were broken up. Many pertaining to Charlotte were taken by the beloved partner of her all too brief partner in marriage, Arthur Nicholls who now returned to his native Ireland. Other items were given to the faithful servant Martha Brown, while many more were sold off, often overseas in America.

As the years passed the Brontë legend grew, and Brontë relics began to appear at salerooms across the world. In 1883 the Brontë Society was formed with a view to collecting as much of this material as possible, and preserving it locally for the people of Haworth and the world. Thanks to the help of some wealthy benefactors they soon gathered a substantial collection, and it was first exhibited to the public in 1895 above the Penny Bank on Main Street, now the Post Office.

The collection grew rapidly, and the society knew that they needed more space. There was one obvious location – the Parsonage itself, but how could they hope to get their hands on it when it was still in use by the church? In 1928 the church put the Parsonage up for sale, this was the only chance for the society to obtain the building but its price tag was £3000, around £200,000 today. Sir James Roberts, a wealthy Haworth businessman bought it and immediately handed the deeds to the Brontë Society. At last those priceless belongings of Anne, Emily, and Charlotte could return home.

By August 1928 the collection was in place, and on the 5th, a Sunday, the Brontë Parsonage Museum opened its doors to the public for the first time. The response was phenomenal. As the picture at the top of this blog shows, the crowds were huge. Everybody wanted to see the Parsonage and pay homage to the sisters in the place they loved most. Thousands upon thousands of people, all wearing their Sunday best, queued for hours, stretching from the Parsonage, past the School Rooms where Anne and Charlotte taught, past the church where their father preached, and down the steep cobbled Main Street of Haworth itself.

The year after the museum was opened, a biography was published by Kaye Sugden entitled ‘A Short History of The Brontes’. It contains a fascinating photograph showing how the museum’s dining room looked when it first opened – and it’s rather different to the room we see when visiting today:

What can visitors to the Brontë Parsonage today expect? In one word: treasure. There are so many things of remarkable beauty here: things that will fill you with awe, such as the newly acquired writing desk that the sisters used with Emily’s initial carved into it. Things that are like nothing else you’ll ever see, including the tiny books the Brontës wrote as children, with writing so small that you can only read it through the handily positioned magnifying glass. Things that are wondrous, such as the headdress Charlotte wore on her wedding day or the sampler that Anne sewed when she was eight years old. Things that can make you overcome with emotion, such as Anne’s brave last letter to Ellen Nussey, or the tiny bonnet that a friend had made for Charlotte’s baby that was never to be born.

The Brontë Parsonage Museum is a place I can never grow tired of, exhibits are rotated and there’s always something new to see. I’ve even been privileged enough to walk around the Parsonage at candlelight, and it has to be said that on such an occasion it’s a serene and completely peaceful place. Throughout the year the Parsonage hosts on lots of special events that are family friendly, and they will be loved by people of all ages. You can find out more here.

2 thoughts on “The Opening Of The Brontë Parsonage Museum”