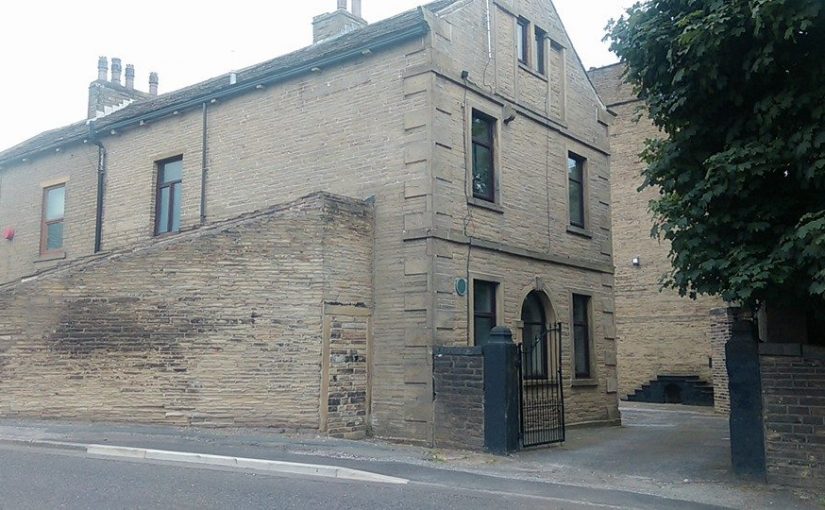 As this year marks the start of the four year ‘Brontë 200’ celebrations, we’ll be looking at some of the locations particularly associated with our favourite sisters. The Brontës were born in Thornton and lived most of their lives in Haworth, both part of the Bradford district of West Yorkshire today. We’ve also looked at Anne Brontë’s connection with Mirfield in recent posts, now part of the Kirklees council area centred upon Huddersfield. In this week’s blog we’ll examine the Brontë connection with an area that lies between Bradford and Huddersfield – Halifax.

Halifax is a town just over ten miles to the south of Haworth. Like much of industrial Yorkshire, recent decades haven’t been overly kind to it, and yet the centre still retains some very grand and beautiful buildings, in particular its famous Peace Hall and an imposing Minster. Finished in 1438, it was a landmark that was to become familiar to both Branwell and Emily Brontë.

Emily had enjoyed only a very short period of formal tutoring at Roe Head School before she became so home sick that Charlotte worried she might die, and arranged for her to return to Haworth. Nevertheless she was an obviously intelligent and scholarly young woman, and in September 1838 she amazed her family by taking a position as a governess and teacher.

The establishment she took her one and only job at was Miss Patchett’s school for girls at Law Hill, Halifax. Law Hill school is in an area called Southowram, around one and a half miles outside the centre of Halifax itself. I visited it myself recently and two things struck me. The first was the beautiful views that still exist around Law Hill, moor like scenery that must have pleased Emily and reminded her of home. The second was the incredibly steep ascent to the location. It is at the top of an inclination that makes the climb of Haworth’s Main Street look almost flat. If Emily and her pupils had to attend the Minster from there the walk down would have been pleasant, but the walk back up must have been very challenging.

Emily Brontë was an intensely private woman, hiding her shyness behind a fierce reserve. Mixing with pupils and teachers alike must have been difficult for her, and the demanding seventeen hour days that she worked left her little or no time for the activity she truly loved – immersing herself in her imaginary world of Gondal, and writing poetry about it.

Charlotte Bronte wrote to Ellen of her worries about Emily overworking herself in Halifax: ‘This is slavery. She will never stand it.’

Stand it she did, however, at least for a little while. We don’t know exactly when Emily gave up her position and returned to Haworth, but most people estimate that it would have been in the Spring of 1839, around half a year after she became a teacher.
Law Hill School is now Law Hill House, a private dwelling in the village of Southowram, easily spottable thanks to the unusual wall that dominates the frontage of it. It’s around two miles from Shibden Hall, then the home of famous, and controversial, Yorkshire diarist Anne Lister. We know that Miss Patchett and Lister did know each other, but we’ll never know if Emily came into contact with her.

As a private house, you can’t enter Law Hill, but you can see the outside and the blue plaque to Emily that hangs on the wall. It’s well worth a visit, but unless you’re a keen hill walker with sturdy legs I recommend you drive there or take the bus from Halifax bus station.

Emily was back home with her beloved sister Anne, but another Brontë was about to make his acquaintance with Halifax.

At the end of August 1840, Branwell Brontë was given the position of Assistant Clerk at Luddendon Foot railway station near Halifax, earning £75 a year. The prospects were good for a man of intelligence like Branwell on the railways. It was a new boom industry that was transforming Britain and making people rich – indeed Charlotte, Emily and Anne Brontë all bought shares in the railway, unfortunately losing the money they invested in the process.

Branwell, predictably, was not a diligent worker. He preferred frequenting the taverns of Halifax, particularly The Swan Hotel and The Old Cock Inn where he frequented with sculptor Joseph Bentley Leyland, his brother Francis Leyland, and others of an artistic temperament.

By March 1842, Branwell’s career in the railway was over as he was dismissed due to negligence. His connections with the inns of Halifax continued however, much to the chagrin of his family in Haworth.

In December 1846 a bailiff had arrived at the Haworth Parsonage seeking the payment of debts that Branwell owed to Thomas Nicholson, landlord of Halifax’s Old Cock Inn. This wasn’t the only instance, and Patrick repeatedly had no choice but to settle Branwell’s large outstanding bar bills rather than see him be taken away for trial at the York assizes.

The Old Cock Inn is still in operation today, not far from Halifax railway station. It has an old world charm outside, but it’s a little rough and ready inside. The fireplace from Branwell’s time is still there, although it’s now underneath a large flat screen television and surrounded by pool tables. I had to go in and drain a glass in memory of Branwell of course, and if today’s clientelle seemed a little boisterous at times, I can’t imagine Branwell disapproving of that.

Remembrance Sunday and the Brontë Heroes
The Death And Funeral Of Patrick Brontë
Branwell Brontë, By Those Who Knew Him