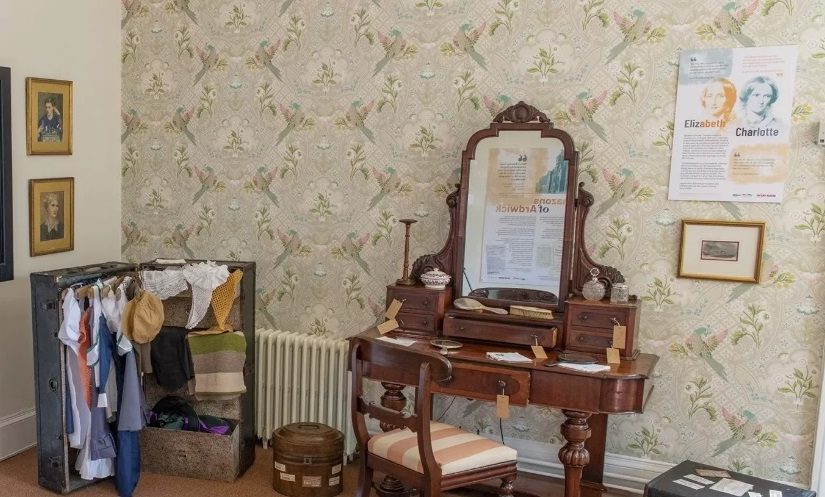 This week saw two anniversaries relating to someone who played a large part in the Brontë story: Elizabeth Gaskell. She was not only a great author in her own right, she was a great friend of Charlotte Brontë, and she was born in Chelsea on 29th September 1810 the daughter of William and Elizabeth Stevenson (nee Holland). The other anniversary is of a letter she wrote on this day in 1856. It’s a fascinating letter as it gives an insight into her relationship with Charlotte Brontë and into the genesis of her great Brontë biography The Life Of Charlotte Brontë which was being written at the time of the letter. The letter was sent to George Smith, publisher of Elizabeth and Charlotte and is reproduced in full below:

“My dear sir, your letter has done me good. The doctor said I was to have my mind at ease. How could I be easy thinking of that ‘very indifferent dinner’ you ate in my behalf? But now I picture you to myself with a haunch of venison before you, tender juicy and good, and not even Mrs Smith to interrupt your enjoyment of your first mouthful by an ill-timed question, she being occupied upstairs by ‘the finest baby that ever was seen.’ I am content to know that I am right, and that Talbot Gwynne is a lady.

Now as to the memoir etc I perfectly agree with you. I had more than half come round to your opinion before you sent me your arguments in favour of it – which are very convincing. I believe, if Sir J. P K S [Sir James Kay Shuttleworth, a friend of both Elizabeth and Charlotte Brontë] had not suggested the publication I should not have done so. ‘The Professor’ is curious as indicating strong character & rare faculties on the part of the author; but not interesting as a story. And yet there are parts one would not lose – a lovely female character & glimpses of home and family life in the latter parts of the tale. But oh! I wish Mr Nicholls [Charlotte’s widower who edited the book ready for posthumous publication] would have altered more! I fear from what you say he has left many little things you would & I would have taken out, as neither essential to the characters or the story, & as likely to make her misunderstood. For I would not, if I could help it, have another syllable that could be called course to be associated with her name. Yet another woman of her drawing – still more a nice one still more a married one, ought to be an interesting one.

I think that, – placing myself in the position of a reader – instead of a writer – of her life, – I should feel my knowledge of her incomplete without seeing the ‘Professor’. I suppose biographers always grow to fancy everything about their subject of importance, but I really think that such is the case about her; that leaving all authorship on one side, her character as a woman was unusual to the point of being unique. I never heard or read of anyone who was for an instant, or in any respect, to be compared to her. And everything she did, and every word she said & wrote bore the impress of this remarkable character. I as my own reader should not be satisfied after reading the Memoir – (of which I may speak plainly enough for so much of it will consist of extracts from her own letters,) if I did not read her first work, – looking upon it as a psychological curiosity. So again I think you are right, & that the Memoir must come first. I have written upwards of 300 pages of my (foolscap) pages, and I am just ending the year 1845. The next nine or ten years will be very interesting I have got such good materials. But I now have many threads of correspondence to interweave, and I want to look at several reviews, – (such as Athenms for her Poems, Athen & Examiners for Jane Eyre, as to how the appearance of so remarkable an author was hailed etc -) and I shall have some difficulty in rummaging them up – Still I look forward to all being ready by Febry (DV to use her own pious expression [Charlotte often used DV in her letters, signifying ‘Deo volente’ or ‘God willing’]). I think it will be nearly 600 pages in all. I have a vision in my mind. I am very sore about reviews; I know it is a weakness, but unfavourable ones depress me very much; I don’t mean purely severe ones, when the faultfinding is done in a friendly spirit; but supercilious, or personal ones, or impertinently flattering ones, – and I know I shall be doubly sore about this. More than doubly, for I shall feel as if I had done her an injury. So I plan on getting out of England at the time of publication &, if possible, for us to go to Rome for a month ending up with the Holy Week – Easter being April 12th.

So you now see when I aim to have it finished. Will that time suit you? I suppose it is not ‘the season’ is it? I can’t write more to-day – I have barely begun to read Mr Lewes’ letters [letters sent by Charlotte Brontë to literary critic G. H. Lewes]. I like, and am obliged to him much for, his kindly way of sending them, & the trouble he took to explain the occasions of their being written – I know him a little; but I have not seen him for a long time; and I did not like a certain familiarity of manner he assumed towards me then; therefore I did not wish to have any direct intercourse with him, & am obliged to you for managing the affair for me.

Do you mind the law of libel. – I have three people I want to libel – Lady Scott (that bad woman who corrupted Branwell Brontë [as Lydia Robinson she had been Anne Brontë’s employer]) Mr Newby [Anne and Emily Brontë’s unethical publisher], & Lady Eastlake [a reviewer who was particularly cruel to Charlotte Brontë], the first & last not to be named by name, the mean publisher to be gibbeted. Yours very truly, E C Gaskell”

There can be little doubt that Elizabeth Gaskell was full of love and admiration for Charlotte Brontë and I particularly like how she forewarns her publisher that she intends to libel three people who were fully deserving of it. She also libelled a fourth individual, William Carus Wilson the founder of the Clergy Daughter’s School at Cowan Bridge, which caused her a huge amount of stress and pressure after the publication of her biographer. Elizabeth Gaskell was prepared to take up arms in support of her friend Charlotte even after her death and even at the risk to her own reputation and financial well-being, and I feel that for that she should be thoroughly applauded.

I hope to see you all next week for another new Brontë blog post, DV.