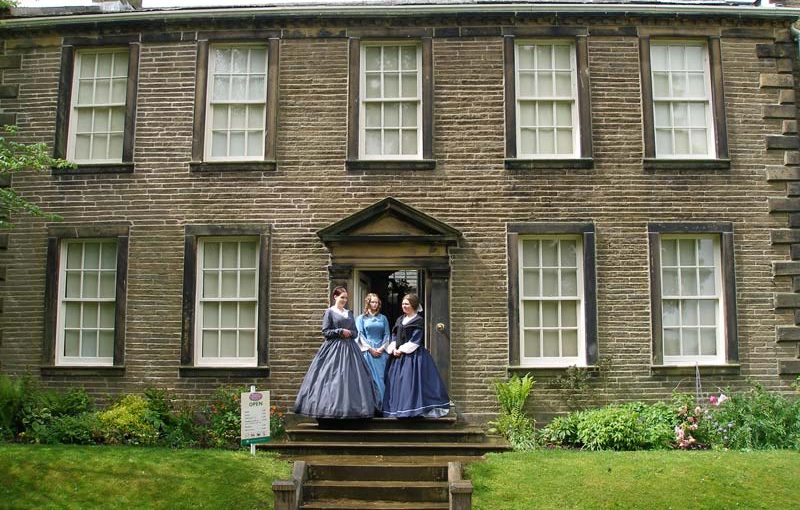 As you’d expect, I love biographies of the Brontës, and of writers in general, and I have many favourites (especially the series by Winifred Gerin). One biography that has special importance in many eyes is ‘The Life Of Charlotte Brontë‘ by Elizabeth Gaskell, and tomorrow, the 25th of March, marks the 162nd anniversary of its publication. It’s special because it was written by a woman who knew Charlotte well, and a great writer in her own right; it’s also the first ever biography of the Brontës, published just two years after Charlotte Brontë’s death. Everyone knows this, but in fact this last point isn’t true.

Whilst deep in research for the Charlotte and Ellen book I’m working on last week, I came across a fascinating notice in the Monmouthshire Merlin – it’s for a biography of the Brontë sisters called ‘Jottings on Currer, Ellis and Acton Bell’, and the review dates from May 1856, a year before Elizabeth Gaskell’s book.

This then is the first ever Brontë biography, but the author remains mysterious as he (I deduce it’s a ‘he’ from a particular section we’ll come to later) goes only by the initials of ‘W.P.P.’ Having discovered the existence of this book, I had of course to track it down. I did so, and read it, and a very enlightening read it is too – some of it is filler, some of it is plain wrong, some of it is bizarre, some of it is beautiful, but it does contain some interesting information I’ve not seen elsewhere. I think it’s time, for all its faults and fascinations, to delve into W.P.P.’s jottings!

The author provides a strange opening ‘notice’ to the biography, in which they say that they had to write it as quickly as possible, and haven’t even had time to proof read it! Nevertheless, the Monmouthshire Merlin reported it had good reviews and sales. The book is brief, and much of it is taken up by excerpts from Charlotte’s ‘biographical notice’ of her sisters, and with Brontë prose and poetry. Here is the peculiar preface that isn’t guaranteed to build confidence:

“These pages following were written in the intervals of engrossing pursuits – pursuits that left us in little time for “jotting”, or, in fact, for any other employment. We were thus obliged to throw off sheet after sheet as quickly as we could; rapidity being the chief object… we have scarcely had time to correct the proof-sheets as they were handed to us from the printers.”

Great Love For The Ladies

“We frankly confess to a great love for the three ladies whose pseudonyms grace the head of this page [this is the opening line of ‘Jottings of Currer, Ellis and Acton Bell”]; yet we trust that we have not suffered this love to influence our judgment in the following notice. Some years ago the writer of this paper was gossiping with some literary friends, when the conversation chance to turn on Currer Bell. We then heard the name for the first time, and felt sore ashamed of our ignorance, which we determined should not be abiding… If there be any who are, as we were, without a knowledge of their writings, let them do as we did, and we promise them, they will award us thanks with no sparing hand, for having drawn their attention to such a hidden treasure.”

“Many years ago, the Reverend Patrick Brontë – then living at Penzance – married, against the wishes of his friends, a very delicate young lady, in whose constitution the seeds of that English plague – consumption – were already sown broad-cast, soon to bring forth fruit a hundred-fold.”

[This is the biggest mistake in the biography, Patrick never travelled to Penzance, and met Maria in Leeds; there is no evidence she had consumption, and it is unlikely that Patrick’s friends would have felt this was anything other than an excellent match]

Harriet Martineau On Charlotte After The Deaths Of Her Siblings

“In her deep mourning dress (neat as a Quaker’s), with her beautiful hair, smooth and brown, her fine eyes blazing with meaning, and her sensible face indicating a habit of self-control, if not of silence, she seemed a perfect household image – irresistibly recalling Wordsworth’s depiction of that domestic treasure. And she was this. She was able at the needle as the pen. The household knew the excellence of her cookery before they heard of that of her books.”

[This is fascinating, as we hear somebody who knew Charlotte well describing her as beautiful and as a 19th century domestic goddess, qualities we never, seemingly erroneously, associate with her today.]

“The latter end of the year 1854, Charlotte Brontë married the Rev. A. B. Nicholls, her father’s curate, and, we believe, an occasional Edinburgh reviewer.”

[Another fascinating insight – was Arthur Bell Nicholls really a reviewer for The Edinburgh Review, using a pseudonym? W.P.P, who we heard earlier mixed in literary circles, certainly believed this to be the case, and it shows Arthur as a literary man, something entirely unknown today]

The Importance Of ‘Jane Eyre’

“Jane Eyre caused a revolution that shook to its centre the very stronghold of King Antiquated Twaddle.”

“Currer Bell was one who detested, as much as any one, those who would seek to drag woman from her own place, and put her in a man’s – thus destroying her most heaven-born attributes, but still she strove, as much as in her lay, to free her sex from those foolish conventionalities that bind women to worthless pursuit, or trammel them with absurd restrictions and inane “proprieties,” as they are misnomered.”

[W.P.P. redeems himself a little with the latter lines, but we couldn’t agree with their opening statement. It’s this, I think, that proves the author was a man.]

A Reputation Built On Rock

“The Bells were highly educated, and their minds were, necessarily, well trained; of their innate purity, there can be no doubt. And, to our minds, they evidenced their true modesty most forcibly. By writing freely and truthfully on all subjects, whether they were what Mrs. Grundy – detestable old bugbear! – would call delicate, or not. Such an honest proceeding would, of course, bring down on them the puny attacks of tiny controversialists; but the reputation of Currer, Ellis and Acton Bell is built, not on the sand, but on the rock; and no feeble attempt of still feebler minds would, or could, shake it one tittle.”

[W.P.P. is back in the good books here, with a strident defence of the Brontës against any critics.]

“And now an unpleasant task devolves upon us. Hitherto we have only had to quote eloquent words, or beautiful images of speech; but now we have to play the censor, though we trust we shall not be censorious. The indiscriminate use of foreign language in novels is a prevalent, and we fear, an increasing evil, in the present day… ‘Tis quite sickening. You cannot take up a novel without being stared in the face by whole pages of French, or German, or Italian… Currer Bell makes some of her characters speak French, paragraph after paragraph. Now, as it is an English book, why not say they spoke in French, but that she translated it?”

[To be fair, having struggled with huge sections of French in ‘Villette’ and ‘The Professor’, the author may have a fair point here, even if he does put it a little too vehemently.]

In Praise Of Emily

“Ellis Bell, in ‘Wuthering Heights’, has produced some wondrous characters… As Currer says, some may not consider it advisable to create such a being as Heathcliff; but he, or she, who has the power to do so, is as a god among the writers.”

“We would beg to remind you all what a treat is in store for us, since Messrs. Nicholson and Brontë – the husband and father of Charlotte Brontë – have commissioned Mrs. Gaskell, – the talented authoress of ‘Ruth’, ‘Mary Barton’, and, more recently, ‘North And South’, – to write a Biography of Currer Bell, which will, we trust, soon be forthcoming.”

What, then, do we make of W.P.P.’s Brontë biography? It’s a product of its time, definitely, but that time was the time of the Brontës – it’s a contemporary voice, and that makes it important. The author has made a number of errors simply because he lacked the information that Gaskell and later biographers had, but his love of the subject shines through. Jottings finishes with the work of another writer under a disguise – one called only ‘Old Hal’. W.P.P writes, “To conclude we give a poem on the Bell sisters, written by one who herself has the spirit of poetry, which shone so brilliantly in them. This is not the only kindness ‘Old Hall’ has rendered us during the preparations of these ‘Jottings’. For this and all others, we take the opportunity of thanking her. May she and hers ever enjoy all they deserve. We indeed “read a power within her soul,” as she herself says, and hope that, in justice to herself and others, she will make it manifest. W.P.P.”
Hal, as in Shakespeare’s plays, is usually short for Harry, but Old Hal is revealed as a woman – it could only therefore be a Harriet; could it be Harriet Martineau, who is earlier quoted within the book? We will never know W.P.P. or Old Hal, but their words can still be discovered, and I leave you now with Old Hal’s poetic tribute to the Brontës:

“Sisters! Your’s the magic art,
To fix the eye, to chain the heart;
To waken mirth, or grief, or rage
As bending o’er your wondrous page,
We read a power within your soul;
A mind that could not brook control,
And list’ning to that master tone.
In its existence lose our own.
Pondering on your chosen name,
O’er my soul a fancy came;
The power that in your writing swells,
Seems to me like distant bells.
Deep, and clear, bursts forth their sound,
Waking mirth, and joy around;
Distant now, and softer sighing,
Tolling faintly, sadly dying.
Ye too must die! Though to the grave,
Laurels bright your footpaths pave,
Fading slowly, one by one,
Sinking like the setting sun,
Ye pass away! But lives the page,
Handed down from age to age.
Yours the never dying name,
Blazon’d on the scroll of fame!”