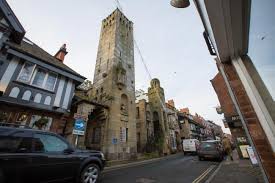 This weekend saw the Festival of Women’s Writing at Haworth welcome a string of celebrated writers, including Sarah Perry, author of recent hit novel ‘The Essex Serpent.’ Of course, you can guess who my favourite women writes are, but today we’ll take a look at some other women writers who were connected with the Brontës – some famous, some less so.

Elizabeth Cleghorn Gaskell is perhaps the writer most associated with the Brontës, thanks to her seminal biography of Charlotte Brontë, written at the request of Patrick Brontë, in 1857. It is a brilliant work and cannot be discounted by Brontë lovers; yes, some of the information within it has been shown to be untrue with further discoveries and the passage of time (for example her portrayal of Patrick as a cruel man who wouldn’t let his children eat meat), but it is the only biography from a woman who actually knew many of the protagonists (not, unfortunately, Anne and Emily who were dead by the time she made Charlotte’s acquaintance). It is also brilliantly written, as you should expect from the woman who wrote such classic novels as Cranford and North and South.

There are also similarities between Gaskell’s life and that of Anne Bronte. She was the son of a clergyman (although her father William Stevenson gave up the cloth four years before her birth), and lost her mother at an early age. Anne was just 17 months old when Maria Brontë died, whereas Elizabeth was even younger, just 13 months, when her mother Elizabeth died. Anne, and her siblings, were then raised largely by their mother’s sister Elizabeth Branwell, whilst Elizabeth Gaskell, on account of her father’s mental breakdown, was sent to live with her mother’s sister Hannah Lumb, nee Holland, in Knutsford. She later, like Charlotte, married a clergyman, William Gaskell, and is buried in Knutsford, where she was raised by her aunt. The town now has a fabulous Gaskell Tower bearing the names of all her books, you can see it at the top of this post.

Harriet Martineau was a friend of Elizabeth Gaskell, as the Holland and Martineau families were leaders in the Unitarian movement that was particularly strong in the midlands and northwest. Harriet later became a great friend of Charlotte Brontë, but it was a friendship that some considered scandalous as Harriet was a prominent atheist. She became famous worldwide for her political writings, and for works including ‘Household Education’, attacking the poor standard of women’s education and gender inequality in general.

Charlotte called her ‘a very noble and genial being’, and said that ‘without being able to share all her opinions philosophical, political or religious, I yet find a worth and greatness in herself.’ Nevertheless, Harriet’s forthright nature led to a break in their friendship, after she told Charlotte that her mind was too full of love ‘and, speaking with the frankness you desire, I do not like its kind.’

Eliza Acton is often hailed as the inspirations for Anne Brontë’s chosen pen-name of Acton Bell. She was an immensely popular writer in the early nineteenth century, but is little known today. Her writing was in marked contrast to Harriet Martineau’s, as she was most famous for her cookbooks, including ‘Modern Cookery for Private Families’ in 1845. It is to Eliza that we have to lay the blame for the first published recipe for brussels sprouts. She was also a poet whose verse was widely published in the periodicals that the Brontës read from time to time, so this may have appealed to Anne.

There is another possible origin of Anne’s pseudonym, however. During their childhood the Brontës often read about, talked about and wrote about castles. On these occasions, it is easy to imagine Aunt Branwell telling them about a castle she saw every day in her younger years when she entered the garden of her home in Penzance. The name of this Cornish castle that the Branwells had a clear view of? Acton Castle.

Julia Kavanagh is even less known today, but she made a striking impression on Charlotte. She was born in Thurles, Ireland but moved to London in 1844 after a period spent living in France. Her parents separated and Julia lived thereafter with her invalid mother, supporting both of them with her writing. It was at times a perilous support, as although her novel ‘Madeleine, A Tale of Auvergne’ was successful, money was always short. Remarkably, she was even shorter than Charlotte, as she recalled in a letter to Ellen Nussey after her first meeting with Julia in London:

‘Another likeness I have seen too that touched me sorrowfully. Do you remember my speaking of Miss Kavanagh – a young authoress who supported her mother by her writings? I called on her yesterday – I found a little, almost dwarfish figure to which even I had to look down – not deformed, that is, not hunchbacked but long-armed and with a large head and (at first sight) a strange face. She met me half-frankly, half-tremblingly… she lives in a poor but clean and neat little lodging – her mother seems a somewhat weak-minded woman who can be no companion to her – her father has quite deserted his wife and child – and this poor little feeble, intelligent, cordial thing wastes her brain to gain a living. She is twenty-five years old.’

Despite Charlotte’s obvious fears Julia Kavanagh continued to make a living from writing, and indeed outlived Charlotte by 22 years.

Four intriguing women writers, very different, but all worthy of acclaim and all worthy of being remembered and being read. By the way, in last week’s post I mentioned a visit to the archives – it was incredibly fruitful, and what I found was something very special indeed. It will take me some time to analyse it all but look out for a special post in mid October!

One thought on “Four Women Writers Known by the Brontës”