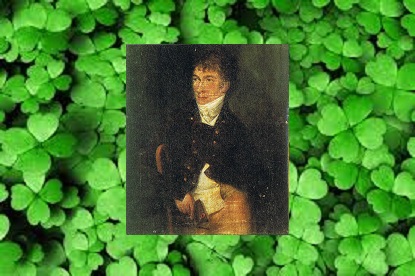 Happy St. Patrick’s Day to you all. It has long been tradition in Ireland to name boys born on this day after the great snake scaring saint, and so it came to pass that on 17th March 1777 a baby born in Emdale, County Down was named Patrick. We would come to know him as Patrick Brontë, father of the greatest writing family the world has ever seen.

In my opinion Patrick’s influence for the good on his children, and therefore on their later work, cannot be underestimated, so it’s good to see special tribute being paid to him in the Brontë Parsonage Museum this year. Thanks to reports contained within Elizabeth Gaskell’s biography of Charlotte Brontë (originating from the testimony of one former and short serving maid Martha Wright), however, some may still think of him as being strict, bad tempered or cold emotionally.

In today’s post, I’m simply going to let others speak about Patrick Brontë – those who knew him, and who saw a very different man to the one that Gaskell portrayed.

‘The anecdote of the little coloured shoes produced a mental sting that no time would obliterate and I felt that all commonplace readers would fail to see the Spartan nature of the act unless you [Ellen was here writing to Elizabeth Gaskell after seeing a draft of the biography] pointed it out to them, and I was intending to ask you to make very clear and distinct comments on Mr. B’s character – I do not wish anything you have said suppressed, only I think your readers will have to be taught to think kindly of Mr. B’

‘”Mr. Brontë was one the kindest husbands I ever knew, except my own, and an Irishman, as you will know Mr. Brontë was. When one of the young ladies told him I was going to be married he came into the kitchen and said, in his pleasantest way, ‘Why, Nancy, it true you are going to marry a Pat?’ ‘Yes, sir,’ I replied, ‘it is, and if he only proves a tenth as kind a husband as you are, I shall think myself very happy in having made a Pat my choice.’ And I have been happy,” she added to us [former Brontë servant Nancy de Garrs was here talking to a Leeds Mercury reporter]. “My husband is just one of the best men that ever lived; we never have had a word!” “Not one, Nancy?” I exclaimed. “No, not one,” she answered, in her positive way. “Then you think Mr. Brontë was not hot-tempered as represented by Mrs. Gaskell,” we said. “Passionate!” exclaimed Nancy; “why he was just the opposite. I well remember one summer morning came into the kitchen and he asked me to clean his boots, as he was going to Thornton. Being bothered about some other matters, I forgot. So when Mr. Brontë called for his boots they were not touched; but he did not fly into a passion: in fact, he did not say a word, he just put on his hat and walked all the way to Thornton and back in his slippers!”‘

‘A kinder man than Mr. Brontë never drew breath.’ [from an interview in the Pall Mall Gazette]

‘Though he is far advanced in years, and has suffered much from ill health, he displayed his pristine energies and faithfulness. That his life and service in his place may be long continued, is the fervent prayer of every churchman.’

‘I had a letter from my Uncle Brontë last June. He says he was in his 83rd year, but, though feeble, was still able to preach once on Sunday, and sometimes to take occasional duty; his son-in-law, Mr. Nicholls will continue with him. He says strangers still continue to call, but he converses little with them, but keeps himself as quiet as he can. I understand the Brontës were beloved in their own neighbourhood.’ [Eliza was his niece in Cornwall, who Patrick was in correspondence with long after the death of his family in Haworth]

The respect that Patrick was held in is also shown in a report into his funeral in 1862. Patrick had left clear instructions that he wanted neither pomp nor ceremony, but he left this world surrounded by the simplicity of love:

‘Our correspondent informs us that on his early arrival at the village the shops were universally closed, and the silence and solemnity that reigned around showed the deep estimation in which the venerable incumbent was held. At the time the procession was formed hundreds of people were congregated in the church-yard from distant villages around, and upon the arrival at the church ut was found that every pew and available space within that venerable edifice was occupied by an orderly and well-conducted and apparently sorrow-stricken concourse… Not a bell was tolled nor a psalm sung. Everything connected with the funeral was truly simple and unostentatious… The sublime and touching burial service was read amid the audible sobs of the surrounding crowd, by the vicar of Bradford. The Rev A.B. Nicholls appeared to be deeply affected and was supported from the grave to the parsonage by the Rev Dr Cartman.’

If you’re in the mood to read more on Patrick, then I recommend this superb blog post by Nicola Friar that takes an in depth look at his background and his importance in the Brontë story. Also this week, I recommend you take a look at this excellent and informative video blog which gives us a fresh, and important, new look at Anne Brontë’s ‘The Tenant Of Wildfell Hall.’

Having done that we have time to relax, or to jig about celebrating St. Patrick’s Day, but we also have time to say, ‘Happy 242nd birthday, Patrick Brontë!’

One thought on “Views Of Patrick Brontë, On His Birthday”