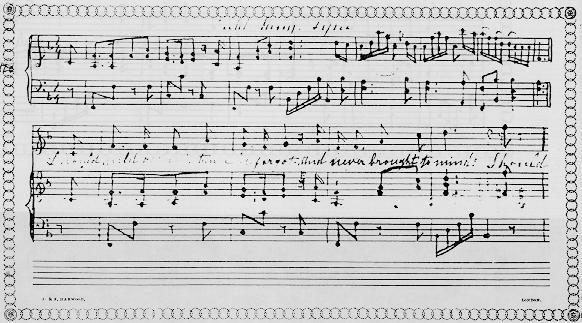 We know the Brontës as a brilliant writing family, and one who loved nothing more than reading novels or books of poetry or composing their own. Whilst that much is certainly true, we should not forget the joy that Anne Brontë and her siblings got from another of the great arts: music.

Branwell was the first of the children to show a musical bent, as we know that he became a proficient flute player at an early age. In late 1833 or early 1834 Haworth parsonage gained a new arrival that would transform the daily lives of its inhabitants: an upright cabinet piano.

The piano, originally sold by Green’s of Soho Square, London, was second hand and very much an economy model, but it was still a significant purchase for a man of Patrick Brontë’s often strained means so it’s likely that he received some financial assistance in the purchase from his childrens’ godparents such as Mrs Firth, and Mrs Francks and Miss Outhwaite.

Patrick knew it was a gift his children would love, but also that it had a practical value. An ability to play and therefore teach music was a valued skill for a future governess, the likely career of his daughters, to have. There was also another reason, as a letter that Patrick sent to many of his parishioners in September 1833 revealed:

‘I have spoken to several people concerning the organ. All seem desirous of having one if the money can be procured. Miss Branwell says she will subscribe five pounds, and some others have promised to give liberally. Mr Sunderland, the Keighley organist, says he will give his services gratis on the day of the opening of the organ, and, in general, the real friends of the church are desirous of having one. A player can also be readily procured.’

Patrick had sent up a fund to buy a grand organ for his church. On 23rd March 1834 it was unveiled alongside a spectacular production of Handel’s suitably themed oratorio ‘Messiah’. The children must have been spellbound at this performance, but it was soon to be their brother playing that self same organ. When Patrick had said that ‘a player can readily be procured’ he had his own son in mind.

The Keighley organist Sunderland was hired to teach Branwell the organ and piano, but Emily and Anne were soon added to the lessons too, with extra lessons provided by a local teacher named William Summerscale. Whilst Branwell proved to be proficient at the keyboard, and did indeed fulfill the role of church organist for a number of years, the enthusiasm of his younger sisters meant that Emily and Anne soon surpassed him in ability. Alas, Charlotte’s poor eyesight meant that she was not allowed to take music lessons for fear that reading the music would strain her eyes.

Ellen Nussey gave a first hand account of listening to music from the sisters:

‘Emily, after some application, played with precision and brilliancy. Anne played also, but she preferred soft harmonies and vocal music. She sang a little; her voice was weak, but very sweet in tone.’

We know that Anne saw a performance of Rossini’s brilliant opera The Barber of Seville when she went to London with Charlotte Brontë in the summer of 1848, an evening that she surely treasured. Emily may have bettered this by meeting one of her musical heroes in person: Franz Liszt gave a concert in Halifax, eight miles from Haworth and a place Emily knew well from her time as a teacher, in 1841, and he also conducted a concert in Brussels during the time she was there.

The Brontës didn’t always have to travel far, however, to hear beautiful music, as Haworth itself was a hotbed of musical perfomance. Their father’s church sometimes held musical concerts, such as one particularly grand event on 20th July 1846 featuring celebrated tenors. It was covered by the Leeds Intelligencer newspaper who reported that the church was ‘crowded to suffocation’, and also that taking pride of place in the church was the organiser, the Reverend Patrick Brontë who it noted was ‘now totally blind.’

This grand yet sacred music would have been a delight to Anne, but she and her siblings may have loved the secular music that was also frequently available in their village even more. The Haworth Philharmonic Society was formed in the 18th century and it gave a spectacular concert every year, as well as smaller events on occasion. These concerts were held in the function room of the Black Bull Inn, and it is a time when the girls would have been allowed into the public house chaperoned by their Aunt Branwell (Patrick was a man of habit and always insisted on leaving at nine o’clock which was when he retired to bed).

These concerts were loud, raucous and full of fun as this report of the 1834 annual concert in the Bradford Observer shows:

‘The Philharmonic Society in this place, held a concert in the Large Room of the Black Bull Inn, on Tuesday evening, April 1st. The songs, catches, and glees were well selected. Miss Parker sung with much sweetness, and was highly applauded. Mr. Parker was in fine voice, and sang with his usual effect. Mr. Clark sung several comic songs with much taste, and was often encored, particularly in the song of “Miss Levi,” which kept the audience in continual laughter. The concert was very numerously and respectably attended, and the company went away highly gratified.’

It is pleasing to think of this as a joyous family event: Patrick and Aunt Branwell remaining dignified, whilst Anne, Emily, Charlotte and Branwell laughed along in front of them. Music became a central delight of Anne Brontë’s life, referred to in her poetry such as ‘Music On Christmas Morning’, and she loved her music scores just as much as any teenage girl loves the latest hits today.

One thought on “The Brontës and the Haworth Music Scene”