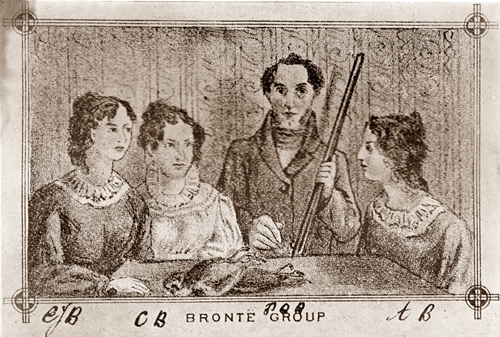 Branwell Brontë died on 29th September 1849, the first in a tragic sequence that would also see his sisters Emily and Anne die within a nine month period. In the months and years leading up to his death he had become a pathetic figure, addicted to drink and to opium, begging for money to obtain his next ‘hit’ and frequently in demand from debt collectors. In a later blog we shall look into why this happened, and see how he became a real danger to himself and his family. If this image of Branwell as being mad, bad and dangerous to know was certainly true by 1849, we should also remember that to the young Anne Brontë he was often a kind and loving brother.

Patrick Brontë, as he was christened, was born in the Bradford village of Thornton on June 26th 1817, a year after his sister Charlotte. He would forever be known as Branwell, his middle name and the maiden name of his mother Maria, to avoid confusion with his father Patrick. A year after Branwell’s birth, Emily was born, and then a year and a half later came the last of the six Brontë children, Anne.

Tragedy was soon to strike Branwell and his siblings. His mother died when he was three, and Anne just one. Shortly before his eight birthday, his two eldest sisters Maria and Elizabeth both died in quick succession of tuberculosis, the disease which was to be the scourge of the Brontës. When considering his later addictions and problems, we should always remember what he had to bear in his formative years. The death of his sister Maria affected him deeply, she had become a de facto mother to him and was full of promise and genius beyond her years. Later, in his poem ‘Caroline’ he would remember seeing his beloved sister laid out for burial:

“There lay she then, as now she lies –
For not a limb has moved since then –
In dreamless slumber closed, those eyes
That never more may wake again.
She lay, as I had seen her lie
On many a happy night before,
When I was humbly kneeling by –
Whom she was teaching to adore;
Oh, just as when by her I prayed,
And she to heaven sent up her prayer,
She lay with flowers about her head –
Though formal grave-clothes hid her hair!”

From an early age Branwell felt a pressure on his shoulders. He was the only boy in the family, he would be expected to become a practical man, a breadwinner. His adult life was to show it was a role to which he was singularly unsuited.

In his childhood he formed a close bond with his three surviving sisters. It was his toy soldiers that started the tales of the ‘twelve men’. They would all four gather and invent stories that are incredibly complex for young children. He and Charlotte would eventually start to write them down in incredibly tiny books that they would stitch together, the famous and priceless books that have writing so small it can only be read with a magnifying glass.

The young Anne, always the doted upon baby of the family, would look up to her brother with a kind of awe. It was he would lead his sisters on their early excursions across the moors, proudly taking the lead as the ‘man’ of the family. He would sit Anne on his knee and tell her stories, and as they both grew a little older he would draw pictures for her. Always a talented artist, he would draw fairytale castles, and gentle countryside scenes and he would inscribe them ‘for Anne’.

Anne Brontë never forgot kindnesses done for her, she would never judge somebody harshly. Even when she saw her brother’s talents being squandered and his life wasting away, she believed that there was still hope for him, if only in Heaven. The prevailing Christian doctrine at the time was that sinners like Branwell were doomed to Hell for ever. Anne couldn’t accept this, she had her own doctrine of love and forgiveness, and she expressed this in her poem about Branwell entitled ‘The Penitent’:

“I mourn with thee, and yet rejoice
That thou shouldst sorrow so;
With angel choirs I join my voice
To bless the sinner’s woe.
Though friends and kindred turn away,
And laugh thy grief to scorn;
I hear the great Redeemer say,
“Blessed are ye that mourn.”
Hold on thy course, nor deem it strange
That earthly cords are riven:
Man may lament the wondrous change,
But “there is joy in heaven!”

Anne, remembering the kind brother who drew her pictures to brighten up the days, would also secure him employment with the Robinson family for whom she worked as a governess. It was this that would lead to Branwell’s tragic end, as we shall see in a later blog, and Anne would carry a feeling of guilt around with her because of it. It was she, she would tell herself, who had brought about the demise of the brother who had once loved her so, and who she always loved.