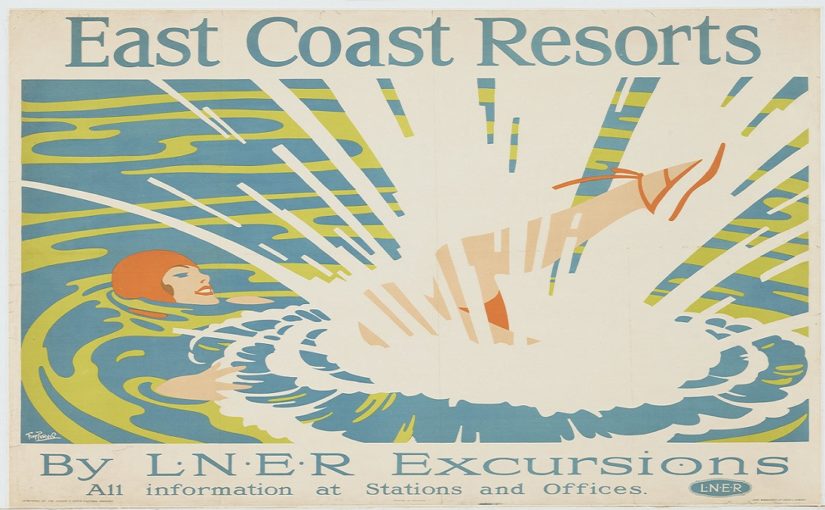 This weekend I should have been talking about the Brontës and my latest book Crave The Rose: Anne Brontë At 200 at the inaugural Filey Literature Festival. Obviously it has been cancelled due to the ongoing lockdown situation, but it would have been the perfect weekend to be there, as we shall see. This week we will look at the Brontës on the east coast.

We know that Anne Brontë loved Scarborough, and I’ve looked at her time there in previous blogs. At the end of May 1849 she travelled to the east coast town for the final time, but she had spent long periods there in the years 1840 to 1844 whilst governess to the Robinson family. She loved the golden sands and fresh sea air, the music and jollity of what was then a fashionable spa town, and as expressed in her poems such as ‘Lines Composed In A Wood On A Windy Day‘ she especially loved the roaring sea and white foam topped waves.

Charlotte Brontë and Ellen Nussey accompanied Anne to Scarborough in 1849 of course, but it was far from their first or last journey to the east coast resorts. They first journeyed there in the summer of 1839, when they spent five weeks on holiday together. The first month was spent at Easton House, two miles inland and home to the Hudson family. Their final week, however, was particularly joyous as they spent a week together in a house on Garrison Street in the resort of Burlington – what we today know as Bridlington.

It was a time of firsts for Charlotte – this was the first time she had ever travelled on a train, and the first time she ever saw the sea, which they initially did on the second day of their visit after walking to the coast from Easton House. Ellen Nussey later described the incredible effect this first encounter with the sea had on Charlotte:

‘The day but one after their capture they walked to the sea, and as soon as they were near enough for Charlotte to see it in its expanse, she was quite over-powered, she could not speak till she had shed some tears she signed to her friend to leave her and walk on; this she did for a few steps, knowing full well what Charlotte was passing through, and the stern efforts she was making to subdue her emotions her friend turned to her as soon as she thought she might without inflicting pain; her eyes were red and swollen, she was still trembling, but submitted to be led onwards where the view was less impressive; for the remainder of the day she was very quiet, subdued, and exhausted. Distant glimpses of the German Ocean had been visible as the two friends neared the coast on the day of their arrival, but Charlotte being without her glasses, could not see them, and when they were described to her, she said, “Don’t tell me any more. Let me wait.”’

In October 1839, Charlotte was writing to Ellen asking her if she can still see and hear the sea in her mind, and on the 28th of October Charlotte wrote to Ellen’s brother Henry Nussey stating:

‘I will not tell you what I thought of the Sea – because I should fall into my besetting sin of enthusiasm. I may however say that its glorious changes – its ebb and flow – the sound of its restless waves – formed a subject for contemplation that never wearied the eye, the ear or the mind.’

It’s little surprise, then, that Charlotte could write of the sea with such power and emotion in Villette. In March 1845 Charlotte wrote to Ellen and showed once more the impact those five weeks in Burlington had made on her:

‘Our stay at Easton is one of the pleasantest recollections of my life – one of the green spots that I look back on with real pleasure.’

Charlotte stayed once more with the Hudson family – in 1849, in the aftermath of Anne’s passing. Knowing her love of the sea, and the restorative powers thought to belong to sea air at the time, her father and Ellen both urged her to take a break there before returning to Haworth, but this was a mournful sojourn rather than the joyous visit of ten years earlier. By this time Charlotte was in Burlington on her own, having encouraged Ellen to return to her family in Birstall, but they had first visited another east coast resort together: Filey.

This first visit to Filey for Charlotte must have passed in a quiet, mournful haze, but the town must still have captured Charlotte’s imagination for she returned three years later. In fact, it was this very weekend in 1852 that Charlotte Brontë arrived in Filey, which is why it would have been the perfect weekend to present my Brontë talk.

Charlotte stayed in Filey for a month, and on 2nd June she wrote to her father Patrick:

‘On the whole I get on very well here – but I have not bathed yet as I am told it is much too cold and too early in the season. The sea is very grand. Yesterday it was a somewhat unusually high tide and I stood about an hour on the cliffs yesterday afternoon watching the tumbling in of great tawny turbid waves that made the whole shore white with foam and filled the air with a sound hollower and deeper than thunder. There are so few visitors at Filey yet that I and a few sea-birds and fishing-boats have often the whole expanse of sea, shore and cliff to ourselves. When the tide is out the sands are wide, long and smooth and very pleasant to walk on. When the high tides are in not a vestige of sand remains. I saw a great dog rush into the sea yesterday and swim and bear up against the waves like a seal – I wonder what Flossy would say to that?’

In a letter to Ellen from Filey, Charlotte also recounted how she had attempted to walk to Filey Brigg but she had been ‘frightened back by two cows’. This brings to mind Emily Brontë’s observation on Charlotte – that she had a morbid fear of encountering unknown animals.

We have read how Charlotte was thinking upon an animal she knew well, however – Anne’s beloved spaniel Flossy. She was also thinking about Anne. It was the third anniversary of her youngest sister’s passing, and she used this holiday in Filey to make her first visit to Scarborough since 1849 – after which she paid for five corrections to be made to Anne’s headstone. I will be creating a special post on Thursday to mark Anne’s anniversary, but it will be one in which I celebrate her life and talents – I think we can all do without any extra sadness at the moment.

It’s clear that both Charlotte and Anne Brontë loved the east coast resorts dearly. Charlotte never forgot Filey, and Filey hasn’t forgotten her. The house in which she stayed, Cliff House, now bears a plaque naming it as the ‘Brontë House’. It is now Charlotte’s restaurant, and is also home to the Brontë Vinery. It’s a pity that I can’t be in Filey as I type this but I’ll be there next year instead and it would be lovely to see some of you there – on the 26th of June, by the way, I’ll also be holding an online Brontë talk and interview as part of Felixstowe Book Festival‘s now online offering; you’ll be able to watch it for free via Facebook or Zoom so look out for more information on that in the next few weeks. Join me next week for an Anne Brontë celebration and then another new Sunday post: stay happy, stay healthy, stay alert and stay away from Durham (unless you live there of course). 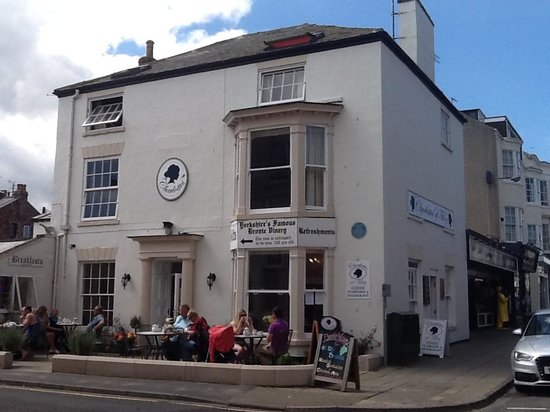 Happy Easter: Lines Composed In A Wood On A Windy Day
Nancy Garrs: Confessions Of A Brontë Servant
Fathers In Brontë Prose And Poetry

9 thoughts on “The Brontës And The East Coast Resorts”