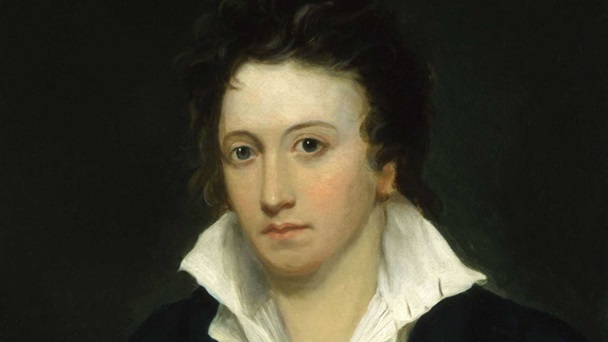 This day, the fourth of August, in 1792 saw the birth of one of the foremost poets of English literature, and one whose influence upon the Brontës is clear to see: Percy Bysshe Shelley.

Shelley is often associated with those other great masters of the second wave of Romantic poets George Gordon Byron and John Keats, and ‘Adonais’, his tribute to the ill starred Keats, is one of the greatest elegies ever written:

‘The breath whose might I have invok’d in song
Descends on me; my spirit’s bark is driven,
Far from the shore, far from the trembling throng
Whose sails were never to the tempest given;
The massy earth and sphered skies are riven!
I am borne darkly, fearfully, afar;
Whilst, burning through the inmost veil of Heaven,
The soul of Adonais, like a star,
Beacons from the abode where the Eternal are.’

These closing lines are prophetic, as in July 1822, just a year after Keats’ death, Shelley was drowned in a tempest upon the waters of Italy’s Gulf of Spezia. In a further twist his body was identified by a copy of Keats’ poetry found in his pocket, bringing an echo of the epitaph that Keats had written for himself: ‘Here lies one, whose name was writ in water.’ He now lies in the Protestant Cemetery in Rome, where literary pilgrims still flock to see the graves of both he and John Keats.

Percy Shelley was undoubtedly a brilliant poet, but he was also a controversial figure in his day, chiefly because of his outspoken atheism and his radical political beliefs in support of the working class. His ‘The Mask Of Anarchy’ was composed in response to the Peterloo Massacre, and he exhorts the masses to:

‘Rise like Lions after slumber
In unvanquishable number –
Shake your chains to earth like dew
Which in sleep had fallen on you –
Ye are many – they are few.’

It is little surprise then that Shelley had a large influence upon Chartism and later upon the work of Karl Marx, but perhaps more surprising to find him influencing Charlotte, Anne and especially Emily Brontë.

We see evidence of Shelley’s presence within Haworth Parsonage in the Brontë writing, and the fact that Patrick Brontë allowed his daughters free access to his books shows his enlightened approach to his daughter’s education and entertainment. Most early nineteenth century fathers would not have dreamed of letting their daughters near this blasphemous, seditious man (the prevailing opinion of the time), but Patrick let them read what they wanted to, for which the world can be thankful.

In a draft version of Charlotte Brontë’s youthful work ‘Caroline Vernon’ set in the world of Angria, she writes:

‘In what an obscure, dim, unconscious dream Miss Vernon was enveloped! How little she knew of herself! However, time is advancing & the hours – those ‘wild-eyed charioteers’ as Shelley calls them – are driving on.’

This description of galloping time has obviously made an impression upon Charlotte, showing that it was perhaps recently that she had read the source of them – Percy Shelley’s ‘Prometheus Unbound.’

Shelley’s poetry is full of such expressions that linger long in the memory; it is brilliantly written and often dwells upon the power of nature, and in this it clearly influenced Emily and Anne Brontë. Emily’s poetry is a force of nature in its own right, and stands alone amongst the verse of its time, but Shelley’s poetry seems the closest to it thematically and in terms of its elegance of phrase. Surprisingly, however, Percy Shelley’s influence upon Emily can most clearly be seen in her only novel, ‘Wuthering Heights.’

It is a work of towering genius, but like Shakespeare, that other genius before whom us mortals can only stand and bow our heads, Emily took influences from books she had read and loved. Thus we can see echoes of the likes of James Hogg in ‘Wuthering Heights’, and we can also see a source for perhaps the most famous quote of all from this most quotable of books:

‘He’s more myself than I am. Whatever our souls are made of, his and mine are the same.’

The brilliance of Emily is such that she makes these lines even more powerful than when a similar expression appeared in Shelley’s ‘Epipsychidion’:

Shelley, like all great writers influenced writers that came in the generation after him, like the Brontës, and continues to influence writers. This too he shares in common with Charlotte, Emily and Anne Brontë, for as long as books are read there will be those who are inspired to take up the pen for the first time themselves by the likes of ‘Jane Eyre’, ‘Wuthering Heights’ and ‘The Tenant Of Wildfell Hall.’

2 thoughts on “The Influence Of Percy Shelley Upon The Brontës”