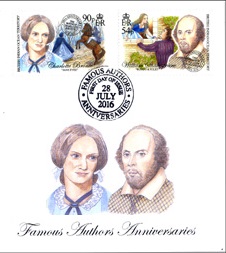 Hot on the heels of Charlotte Brontë’s 200th birthday, April 23rd 2016 marks the 400th anniversary of the death of the greatest playwright of all time – William Shakespeare. It’s a day when people across the world will celebrate his wonderful work, but what did the Brontës think of him, and what influence did he have on Anne Brontë in particular?

The only pronouncement we have on Shakespeare from the Brontës was not an altogether flattering one, but then again it was from Charlotte who was never one to gild the lily, as the bard would have said. On July 4th 1834 she wrote to Ellen Nussey advising her what she should read:

‘If you like poetry let it be first rate, Milton, Shakespeare, Thomson, Goldsmith, Pope (if you will though I don’t admire him), Scott, Byron, Campbell, Wordsworth and Southey. Now Ellen don’t be startled at the names of Shakespeare, and Byron. Both these were great men and their works are like themselves. You will know how to choose the good and avoid the evil, the finest passages are always the purest, the bad are invariably revolting you will never wish to read them over twice. Omit the comedies of Shakespeare.’

The Brontës, home educated though they were to a large extent, were much better read than a lot of their contemporaries, as Patrick allowed them free reign to read what they would, rather than censoring or limiting their reading materials as many fathers would have done. They also had access to the complete works of Shakespeare in an incredibly rare first folio.

It was housed at nearby Ponden Hall, two miles directly across the moors from Haworth and a place that Emily and Anne in particular often visited. In the early nineteenth century it had one of the largest private library collections in Europe, and pride of place went to that Shakespeare first folio. Alas it has now left Ponden and its whereabouts have long since been lost, as it would today be priceless.

Can we see Shakespeare’s influence on any of Anne Brontë’s works? How about The Taming Of The Shrew? A woman living in a man’s world, strong willed and determined to stand up for her own rights. Of course whilst Shakespeare eventually subjugates his Katherina, Anne insists on the triumph of Helen in her The Tenant Of Wildfell Hall.

I love Shakespeare (not quite as much as I love the Brontës of course), so I’ll be joining in the celebrations, just as I joined in Charlotte’s ‘Brontë 200’ celebrations in Haworth on Thursday. It was a wonderful day, and I was especially pleased to meet some of this blog’s readers and fellow Anne fans there.

Patrick Brontë, Maria Branwell And A Triple Wedding
A Brontë Journey To Brussels, February 1842
The Brontës, Family And Friends In Colour

3 thoughts on “William Shakespeare And The Brontës”