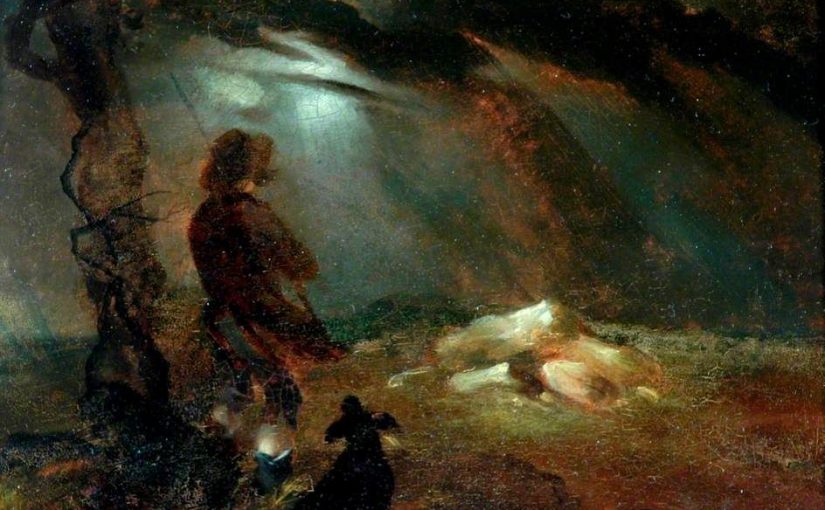 June 1848 saw the publication of Anne Brontë’s brilliant, if at the time controversial, second novel, ‘The Tenant Of Wildfell Hall‘, but she wasn’t the first Brontë sibling to be published in this month. That honour goes to her often maligned and misunderstood brother, Branwell.

Patrick Branwell Brontë was a complex man who undoubtedly had some issues that contributed to his decline and death later in the year 1848, but he also undoubtedly was a man of talent. Branwell’s addictions were in all probability linked to issues relating to the childhood losses he suffered – the devastating early deaths of his mother and then his eldest sisters Maria and Elizabeth; we should not, however, let the form of his end cloud our impression of his life as a whole.

Branwell was also not lacking in talent as a poet, and we do well to remember that Branwell was the first of the Brontë siblings to find themselves in print (Anne was the only other sibling who had her poetry published without paying for it). His verse appeared in a number of local publications under the pseudonym of ‘Northangerland’, a complex character from the Angrian saga, one readily identified with by his creator. Under this guise his work appeared in publications ranging from the Yorkshire Gazette and Leeds Intelligencer to the Halifax Guardian which on June 5th 1841 published his poem ‘Heaven and Earth’.

Branwell had twelve poems published by the Halifax Guardian alone, and this was no mean feat as they took their poetry very seriously, and the standard was very high. Reading Branwell’s poetry today reinforces the impression of a good poet with a real love of verse. It is sad, therefore, that by 1846 his addictions made him unable to be considered for inclusion within ‘Poems by Currer, Ellis and Acton Bell‘.

Branwell was a talented man in many areas; a skilled musician from an early age, a fine artist (his painting ‘The Lonely Shepherd’ adorns this post), and a loving brother who drew sketches for his baby sister Anne – a kindness she never forgot. He could write with both hands at once, composing a Greek letter with his left hand and a Latin letter with his right – an incredible testimony to the talents that lay within him. If Branwell had reached creative maturity I have little doubt that the results would have been brilliant, but certainly for much of his life he was a loving and positive influence on his sisters and on their work.

I will leave you with an extract from Branwell Brontë’s long, moving and brilliant poem ‘Caroline’, in which many see a tribute to the eldest sister he loved, Maria, whose loss cast a life long shadow over his years to come:

‘I stooped to pluck a rose that grew
Beside this window, waving then;
But back my little hand withdrew,
From some reproof of inward pain;
For she who loved it was not there
To check me with her dove-like eye,
And something bid my heart forbear
Her favourite rosebud to destroy.
Was it that bell — that funeral bell,
Sullenly sounding on the wind?
Was it that melancholy knell
Which first to sorrow woke my mind?
I looked upon my mourning dress,
Till my heart beat with childish fear,
And frightened at my loneliness,
I watched, some well-known sound to hear.
But all without lay silent in
The sunny hush of afternoon,
And only muffled steps within
Passed slowly and sedately on.
There lay she then, as now she lies —
For not a limb has moved since then —
In dreamless slumber closed, those eyes
That never more might wake again.
She lay, as I had seen her lie
On many a happy night before,
When I was humbly kneeling by —
Whom she was teaching to adore:
Oh, just as when by her I prayed,
And she to heaven sent up my prayer,
She lay with flower about her head —
Though formal grave-clothes hid her hair!
Still did her lips the smile retain
Which parted them when hope was high,
Still seemed her brow as smoothed from pain
As when all thought she could not die.
And, though her bed looked cramped and strange,
Her too bright cheek all faded now,
My young eyes scarcely saw a change
From hours when moonlight paled her brow.
And yet I felt — and scarce could speak —
A chilly face, a faltering breath,
When my hand touched the marble cheek
Which lay so passively beneath.
And thus it brought me back the hours
When we, at rest together,
Used to lie listening to the showers
Of wild December weather;
Which, when, as oft, they woke in her
The chords of inward thought,
Would fill with pictures that wild air,
From far-off memories brought ;
So, while I lay, I heard again
Her silver-sounding tongue,
Rehearsing some remembered strain
Of old times long agone!’

4 thoughts on “The Inspiring Poetry Of Branwell Brontë”