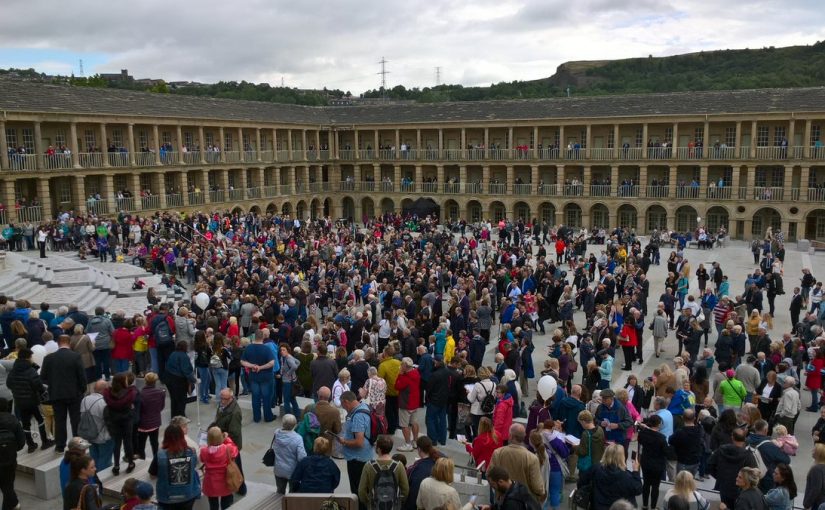 August 1st 2017 is Yorkshire Day, and so of course it’s the ideal day to remember the Queens of Yorkshire: Charlotte, Emily and Anne Brontë! This Yorkshire Day is of special significance in Halifax, as it marks the grand re-opening of one of the county’s most beautiful, and historically important buildings, the Halifax Piece Hall.

The Piece Hall dominates the West Yorkshire town of Halifax, but for years it has lain unused, a ghostly reminder of the past. After an extensive refurbishment it re-opens today, and will be home to food stalls, artisan craft shops, and independent traders of all kinds. The picture at the top of this post is actually of the crowds waiting to enter this morning. First opened to the public in 1779 it was a grand symbol of municipal pride, and an imposing reminder of how much the town of Halifax was growing. It was the woollen industry that was making the towns of Halifax and nearby Huddersfield wealthy, and the hall’s initial function was as a place for hand loom weavers to sell pieces of cloth.

This connects the Piece Hall with Haworth, ten miles to the north, as the village’s growth at the turn of the 19th century was largely thanks to an influx of hand loom weavers and woolcombers. It was hot and laborious work, and contributed to Haworth’s unsanitary conditions, as the government inspector Charles Herschel Babbage found when he inspected Haworth, at Patrick Brontë’s request, in April 1850:

‘In order to obtain the proper temperatures for the operation [woolcombing] iron stoves are fixed in the rooms where it is carried on, which are kept alight day and night and the windows are seldom, if ever, opened excepting in the height of summer. In some cases, I found that this business was carried out in bedrooms, which consequently became very close and unhealthy from the high temperatures maintained by the stoves and want of ventilation.’

The Piece Hall has another link to the Brontës, as it would certainly have been well known to both Emily and Branwell Brontë. In 1840 Branwell became assistant clerk at Luddendon Foot Railway Station, and Halifax became his regular drinking haunt – often alongside his sculptor friend Joseph Bentley Leyland and his brother Francis. One pub known to be frequented by Branwell was the Old Cock Inn, and it stands in the shadows of the Piece Hall.

Halifax was also the haunt of Emily Brontë between the autumn of 1838 and the spring of 1839, a time when she served as a teacher at Miss Patchett’s school known as Law Hill at Southowram. The village of Southowram is on the outskirts of Halifax, and as it’s surrounded by moors it was surely to Emily’s liking. It is also at a significant elevation, and the road leading up to it is far steeper and longer than the famous climb of Haworth’s Main Street. It offers a fine view down into the valley of Halifax itself, and the building that stands out above all others is the Piece Hall.

It is hard to give a precise end date to Emily’s time as a teacher, but it is generally accepted now that she lasted little more than half a year in the role. Nevertheless, these were pivotal months – both the building known as High Sunderland, a short walk from Law Hill, and the bizarre history of Law Hill itself would remain imprinted in Emily Brontë’s memory until they came to play central parts in ‘Wuthering Heights‘.

Celebrations will be going on all day and night at the Piece Hall today, and part of the celebrations involves brass band music that we know Anne Brontë and her siblings enjoyed at Haworth. Celebrations will also be taking place across the county of the Brontës, and of course my own county as well, to mark Yorkshire Day. You don’t have to know what ‘Ee bah gum, has tha put wood in t’oil?’ means (answer: ‘excuse me, have you closed the door?’) to celebrate Yorkshire Day – if you love the works of the Brontë sisters then you can count yourself as an honorary Yorkshire person (though I can’t guarantee you’ll get a Yorkshire passport).

William Shakespeare And The Brontës
Tiger And Tom: The Cats Of The Bronte Sisters
170 Years Ago Today - Anne Brontë's Glorious Sunset

3 thoughts on “A Brontë Yorkshire Day & the Halifax Piece Hall”