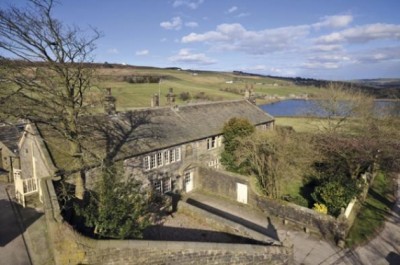 England is lucky enough to have lots of guest houses and B&Bs that have a wealth of history to them, as well as a warm welcome for their visitors. One such place is of particular interest to Brontë lovers – Ponden Hall which nestles near the moorland reservoirs between Haworth and Stanbury. Emily and Anne Brontë, and sometimes Charlotte and Branwell too, were frequent visitors to the Hall, and so they would have been as pleased as I was to hear that it recently won a prestigious Dorset Cereals Award for the best B&B’s and friendliest hosts.

I can fully understand it winning the award, having visited myself, and even if it didn’t have such an incredible literary heritage their home made cakes are not to be missed! Anyway, this post isn’t intended as an advertorial, so let’s take a look at Ponden Hall’s Brontë connection!

Emily and Anne Brontë were always happiest in each other’s company, walking miles in each others company, revelling in the stark yet stunning countryside that surrounded them and often dreaming up plots for their Gondal stories with line by line coming step by step. Often they would cross the moors with one particular destination in mind – Ponden Hall.

Ponden Hall is a large and imposing stone fronted farm house around a two mile walk from Haworth itself (you can still cross the Moors to it, or take the road and stop off at Stanbury’s ‘Wuthering Heights’ pub en route). At the time of the Brontës it was home to the Heaton family, who were trustees of Haworth’s St. Michael and All Angel’s Church, and leaders of Haworth society.

As the church was the incumbency of Reverend Patrick Brontë, the families became well known to each other, and Emily and Anne in particular were frequent visitors to the Hall. Both Anne and Emily could be intensely shy, yet at Ponden they felt relaxed and at home. Alongside its moorland location it had another attraction to the literature loving girls – it held the largest private collection of books in Europe at that time, including a first edition folio of Shakespeare’s plays. The familiarity the sisters gained with the hall can be seen in the work of Anne, Emily and Charlotte.

There can be little doubt that Ponden Hall was the architectural inspiration for Anne Brontë’s Wildfell Hall. It shares the same central portico underneath a date bearing plaque, and flanked by tall latticed windows. It also seems likely that Ponden Hall is the real Wuthering Heights. Whilst the more often feted Top Withens matches the spot on the moor of Wuthering Heights, it is a small and unimposing building, whereas Ponden Hall is much more like the building Emily so powerfully describes.

We know too that Emily sometimes stayed at Ponden Hall and slept in a box bed there. There is still a box bed today, next to the window that Emily would have looked out of towards the moors. Just seeing it sends a thrill through your bones, it’s impossible not to imagine that incredible opening to the novel, with Cathy’s ghost scratching at what was probably the very same window. You can sleep in that room and that box bed today, but don’t have nightmares of a plaintive voice wailing: “’Let me in – let me in! I’ve been a waif for twenty years!'”

Ponden Hall’s ghostly qualities can also be seen to have inspired Charlotte Brontë. Legend states that the Hall is haunted by a Gytrash, a ghostly demonic dog akin to a Hound of the Heatons rather than a Hound of the Baskervilles. The memory of this Ponden Hall legend returned to Charlotte when she was writing Jane Eyre, as we can see from Jane’s first encounter with Rochester’s dog:

“I heard a rush under the hedge, and close by glided a great dog, whose black and white colour made him a distinct object against the trees. It was exactly one form of Bessie’s Gytrash… Nothing ever rode the Gytrash: it was always alone.”

Ponden Hall certainly inspired the Brontës, and it’s well worth staying at or visiting today. There is history in its stones and in its walls, the same walls gazed upon by Charlotte, Emily and Anne Brontë nearly two hundred years ago.

Thornton, Where The Brontë Story Began
The Brontës And The Art Of Writing
Happy 200th Birthday To Anne Brontë!

One thought on “The Award Winning Ponden Hall And The Brontës”