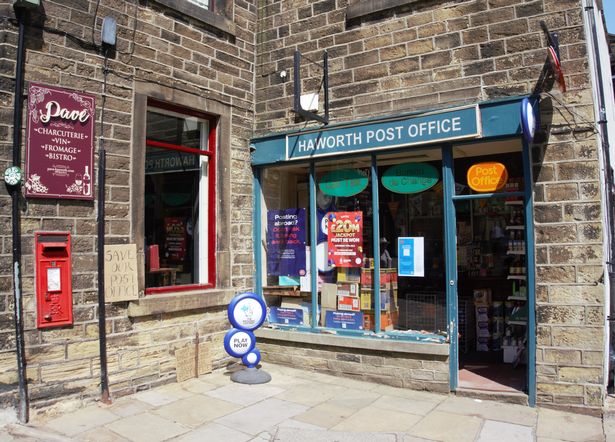 Yesterday, by which I mean Saturday October the 9th as I write this, was World Post Day. Some people think that in this world of WhatsApp and emails the days of posted letters are numbered, but there’s still nothing like receiving a handwritten letter in the post – it always makes a pleasant change to the bills. The postal service changed a lot in the first half of the nineteenth century, and it made a huge difference to how much we know about the Brontës, so in today’s post we take a look at the Brontës and post.

The first post revolution had taken place in 1784. In this year fledgling post offices were set up in towns which then fed into their own local infrastructures. Mail coaches could carry letters from one post office to another, meaning that for the first time postal communication as we know it was possible. It was this system which allowed Maria Branwell to send her courtship letters to her ‘Saucy Pat’ in 1812, and it was this system that the Brontë siblings grew up with as they made their first tentative contacts with the outside world.

One thing radically different about this 1784 mail solution was that the cost of postage was borne by the recipient – if it was in place today it would make receiving junk mail even more intolerable. There was no such thing as a stamp and the cost to the recipient was based upon both number of sheets sent and the distance they were sent.

A single sheet of paper cost fourpence if sent 15 miles or less, with each subsequent sheet of paper multiplying that cost. This could soon add up to a significant cost at a time when a pound could be a month’s salary to some, which is why cross letters came into being. Cross letters are a style of letter which has writing both vertically and horizontally, meaning that you’d have to rotate the letter 90 degrees to read the remainder once you’d read half of it. It seems incredibly confusing to our modern minds and eyes, but writing and reading them must have seemed second nature at the time. The Brontës were certainly familiar with the cross letter art, and must have become so used to it that they sometimes continued to use it even when postal reforms had made it unnecessary. For example, Anne Brontë’s final, incredibly moving, letter to Ellen Nussey in 1849 was crossed.

Distance was also a factor to be considered, as the cost rose sharply from four pence up to a shilling for mail sent up to 300 miles away, and even more for distances greater than that (such as the 400 miles or so between Penzance and the West Riding of Yorkshire, which saw letters going back and forth between the Branwell sisters in the run up to Maria’s December 1812 wedding.

The distance between Haworth and Birstall, home of Charlotte’s great friend and regular correspondent Ellen Nussey was 16 miles. Ellen’s family was considerably more comfortable financially than Charlotte’s, but even so we can see that they were concerned about the cost of the letters flying regularly between them. On 4th July 1834, for example, Charlotte begins:

‘Dear Ellen, you will be tired of paying the postage of my letters but necessity must plead my excuse for their frequent recurrence.’

In 1840 things changed thanks to a man named Rowland Hill. His name is largely forgotten today and yet he brought about a communications revolution whose influence was as great as the invention of the internet, and whose influence is still being felt today. Born in Worcestershire in 1795 Hill was a teacher and social reformer, and his particular area of interest was the postal service. Hill knew that the 1784 system prohibited working class people, and poorer members of the middle class from being able to send letters, and he put forward plans for a new system whereby the sender would pay for the carriage of their letter, but at a much lower rate.

The government adopted his plans in 1840 and the cost of sending a simple letter became just one penny. To show the cost had been paid for another of Hill’s ideas was applied to the envelope: a postage stamp which became known as the penny black. Within a decade, Hill’s system of stamps, envelopes and a universally available post service had been adopted in nearly a hundred countries.

Charlotte Brontë had been a prolific letter writer before the change came into place on May 6th 1840, but she became an even more frequent letter writer after this date. Thank goodness for that, as it’s thanks to the near thousand letters from Charlotte which are still in existence (many more are sadly lost or destroyed, such as her letters to Mary Taylor) that we know so much about the Brontës of Haworth.

Charlotte Brontës letters are a genius work of art in their own right, as anyone who has read a book of them will agree. The postal system itself is the conduit which allowed that art to take form and exist, and which will continue to permit a ready flow of genius, love, hope, yearning, loss and comfort – if we let it.

Haworth Main Street Post Office has been a central part of its community since the nineteenth century, used by the Brontës and countless others, and yet for many years now it has been under threat from people who only see value in balance sheets.

Thankfully the cause has been taken up by local MP Robbie Moore, and initial plans to close the post office this year have been postponed. Nevertheless, it could be a temporary reprieve. This historic post office has been told to prove it is commercially viable, and it will have to outperform the sterile post office counter at the Co-Op at the foot of Haworth’s hill. If it doesn’t win this battle it faces closure next year, and its historic associations, not to mention its convenience for all the people who don’t want to trudge down the hill and back up again, will be gone forever. If you visit Haworth please take time out to use the Main Street Post Office – every transaction counts, because it’s now in a critical ‘use it or lose it’ scenario.

We should all write more letters – if anyone wants to write a Brontë related letter to me (no bills please, I have enough of those) then email me for my details. I hope to see you next week for another new Brontë blog post – no stamp required.

2 thoughts on “The Brontës, Stamps, Letters And The Post”