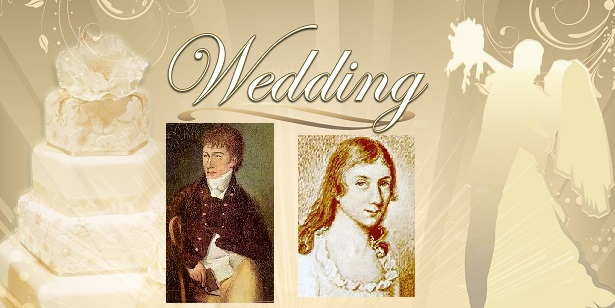 The new year rapidly approaches, and for many of us, let’s face it, this is a time to relax and recharge our batteries before the madness of New Year celebrations arrive. A time to curl up with a good book, hopefully with a nice warm fire (or radiator) nearby or a duvet pulled up tight. For one, or rather three, couples in 1812 however, this was a time of great activity, and one that would change their lives forever. It also changed literary history forever, for on this weekend 206 years ago, Patrick Brontë married Maria Branwell.

On 29th December 1812 the farmer’s son from County Down and the merchant’s daughter from Cornwall were married in St. Oswald’s church in Guiseley, between Leeds and Bradford. It had been a whirlwind romance, as Patrick and Maria had only met that summer when Patrick took up a post as classics examiner at Woodhouse Grove school in Leeds. It was a Methodist school run by John and Jane Fennell, who had earlier met Patrick when they were all living in Shropshire. Their niece had arrived at the school, after a journey of over 400 miles, around the same time to work in an administrative position, although she may later have expected to take up a teaching role – this was, of course, Maria Branwell, as Jane was the sister of her father Thomas.

Love and marriage came late for both of them, especially by early nineteenth century standards, as Maria was in her late 20s and Patrick in his mid 30s, but there can be no doubt at all that this was a love match and that they were both smitten with each other from the moment they met. We see plentiful evidence of this in Maria’s letters during her courtship to her ‘saucy Pat’. They are often amusing, always moving. By December 5th we can see that wedding arrangements were being finalised:

‘We intend to set about making the cakes here next week, but as fifteen or twenty persons whom you mention live probably in our neighbourhood, I think it will be most convenient for Mrs Bedford to make a small one for the purpose of distributing there, which will save us the difficulty of sending so far.’

Mrs Bedford was Patrick’s landlady, and of course just over three weeks after this letter, Maria would herself be living with Patrick in Hartshead as Mrs. Brontë. Patrick and Maria weren’t the only couple getting married on that day, as an advertisement placed in The Gentleman’s Magazine at the start of 1813 reveals:

‘Lately at Guiseley, near Bradford, by the Rev. William Morgan, minister of Bierley, Rev. P. Brontë, B.A., minister of Hartshead-cum-Clifton, to Maria, third daughter of the late T. Branwell, Esq., of Penzance. At the same time, by the Rev. P. Brontë, Rev. W. Morgan, to the only daughter of Mr. John Fennell, Headmaster of the Wesleyan Academy near Bradford.’

Woodhouse Grove had seen a series of strange coincidences that summer, as Reverend William Morgan had also met the Fennells and Patrick Brontë during an earlier ministry in Shropshire before he too moved north to the burgeoning towns of the West Riding of Yorkshire. Originally from Wales, Morgan fell in love with the other young woman at the school, Jane Fennell junior – cousin to Maria Branwell.

Patrick and William were lifelong best friends, and Reverend Morgan presided over many important events in the lives of the Brontë sisters – from their christenings to, all too soon, their funerals. But wait – I mentioned three couples, so let’s turn to the third couple, as that leads us to a detailed account of what happened on that December day in Guiseley.

Maria Branwell had a younger sister, Charlotte, who had fallen in love with their cousin Joseph Branwell. The two sisters, and their mutual cousin Jane (who was also a cousin, rather than sister, to Joseph Branwell), colluded with each other via correspondence that must have whizzed back and forth across the hundreds of miles separating Leeds and Penzance, and they arranged to get married at the same day and same time, despite the distance separating them. This was later recalled by Charlotte and Joseph’s daughter, another Charlotte Branwell (cousin to the Brontë sisters). On Christmas Day 1884, The Cornish Telegraph printed her story:

‘It was arranged that the two marriages [Patrick and Maria and William and Jane] should be solemnized on the same day as that of Miss Charlotte Branwell’s mother, fixed for 29th December in far off Penzance. And so, whilst the youngest sister of Mrs. Brontë was being married to her cousin, the late Mr Joseph Branwell, the double marriage, as already noted was taking place in Yorkshire. Miss Charlotte Branwell also adds that at Guiseley not only did the Rev. Mr Brontë and the Rev. Mr Morgan perform the marriage ceremony for one another, but the brides acted as bridesmaids for each other. Mr Fennell, who was a clergyman of the Church of England, would have united the young people, but he had to give both brides away. Miss Branwell notes these facts to prove that the arrangement for the three marriages on the same day was no caprice or eccentricity on the part of Mr Brontë, but was made entirely by the brides. She has many a time heard her mother speak of the circumstances. “It is but seldom,” continues Miss Branwell, “that two sisters and four cousins are united in holy matrimony on the same day. Those who were united on that day bore that relationship to each other. Mrs. Brontë (formerly Maria Branwell) and my mother, Charlotte Branwell, were sisters; my father was their cousin; and Jane Fennel was a cousin to them all, her father, the Rev. J. Fennell, having married a Miss Branwell of a former generation.

If the account I have given you is likely to be of any interest you are quite at liberty to use it as you think proper. I really think a deal of eccentricity has been ascribed to Mr Brontë which he never possessed, and from his letters to my dear mother, of which there are some still in existence, I should say he was a very worthy man, but one who had to pass through some great trials in the early death of a truly amiable wife and of a very gifted family.”’

It is clear from Charlotte’s account above that Patrick and Maria had a very loving, if all too brief, marriage, and their wedding day must have been an exciting and joyous one. It is said that after the marriage in Guiseley, the two happy couples repaired to Woodhouse Grove school for their reception, cakes and all! Let us leave them there, and indeed leave 2018 on a note of love and promise. This has been the year of Emily Brontë, and I hope it has brought you closer to her and to her wonderful family, I certainly feel that it has done so for me. I wish you a Happy New Year, and I’ll have a new post out on the 1st of January 2019. Tempus fugit!