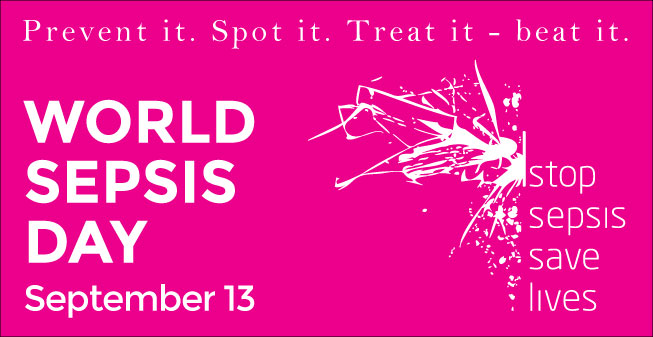 The 13th September marks World Sepsis Day, and it’s a condition that we should all be aware of as it can strike at any age, and accounts for around 44,000 deaths every year. It’s also claimed many lives throughout the centuries of course, and one of those may well have been Maria Brontë, nee Branwell, mother of the six Brontë siblings.

This week also marks the 197th anniversary of the death of Maria Brontë. She had suffered a long and painful illness that left Patrick distraught and facing financial ruin (he was helped out by friends and well wishers, one of whom is believed to be Yorkshire philanthropist Frances Mary Richardson Currer), and six children without a mother. By the time of Maria’s death, her sister Elizabeth had arrived at the parsonage, and the woman who became known as Aunt Branwell never saw her beloved Cornwall again. Nevertheless the loss of Maria had a huge impact on the Brontë children, and perhaps particularly on Branwell and Charlotte.

‘Hang on’, I hear you say, ‘Maria Brontë died of uterine cancer!’. This is the commonly accepted theory of her death, but I believe an expert source who looked at the facts of the matter in 1972 gave a compelling case for the cause of death being sepsis.

Professor Philip Rhodes was one of the foremost gynaecologists and obstetricians of his day; he was a Fellow of the Royal College of Surgeons, a Fellow of the Royal College of Obstetricians and Gynaecologists, and a Professor at the University of London’s St. Thomas’s Hospital Medical School. He was also a huge Brontë fan, and this led him in 1972 to write the article ‘A Medical Appraisal of the Brontës’. Here is his opinion on Maria:

“Mrs. Brontë died in September 1821. It seems that she had taken to her bed and had slowly succumbed to illness over the course of seven months. According to Mrs. Gaskell she was in agonising pain for most of this time, and this evidence is given on the strength of a letter from Mr. Brontë to his former vicar. Mrs. Brontë was born in 1783, so that at the time of her death she was only 38. The pain from which Mrs. Brontë suffered was presumably abdominal, and in view of her obstetric history it is probable that her symptoms were related to her pelvic generative organs. It is obvious that she did not die as an immediate result of her rapid childbearing, but probably because of some chronic disorder consequent upon it. The common causes of death during or just following childbirth are haemorrhage and infection. She could possibly have had a lingering chronic pelvic inflammation for this would be painful and debilitating and would cause heavy periods so that she would gradually become anaemic. Another possibility might have been a chronic inversion of the uterus giving rise to pain, bleeding and anaemia. The ultimate cause of death in both instances would be cardiac failure due to the anaemia. Of course there is an outside possibility of cancer of some organ within the abdomen, but it is unusual for this to occur before the age of forty. Certainly genital cancer would be very unlikely when the previous normality of reproductive function was so well displayed. There is no reference to vomiting so that a malady of the alimentary tract is less likely than some chronic disease of the pelvic organs. All in all, I would lean to to the idea of chronic pelvic sepsis together with increasing anaemia as the probable cause of her death. It is to be remembered that this was before the age of bacterial knowledge so that almost nothing was known of infectivity by extraneous organisms. Gynaecological knowledge was primitive, there was no ante-natal care and no attempt at follow-up after childbirth.”

Maria’s death was a tragedy for all who knew her, but from adversity came the strength the Brontë children found with each other, and the works of genius that eventually resulted from their mutual love, support and brilliance. Here are the symptoms to look for in sepsis, if you see or experience them seek medical help immediately:

Happy Birthday Charlotte Brontë, 202 Today!
The Moving Stories Of Currer, Ellis and Acton Bell
The Brontës And The Theatre

One thought on “World Sepsis Day And Maria Brontë”