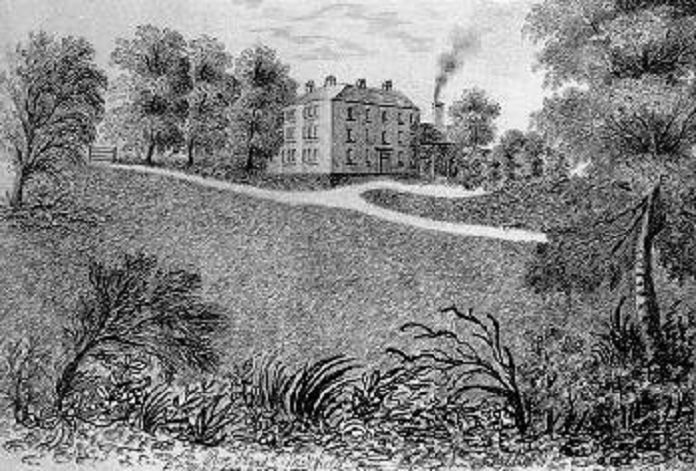 The start of September witnesses a collective sigh (of relief or sadness, you decide) of parents across the United Kingdom as their children head back to school. This was a feeling that Patrick Brontë and de facto mother Aunt Elizabeth Branwell would have known as their children returned to their schools from summer or winter breaks – and especially in the case of Anne Brontë, as she, after all, spent more time at school than any of her siblings, remaining at Roe Head near Mirfield from the late summer of 1835 until the close of 1837.

When we think of the Brontës’ school days we inevitably think of tragedy. Cowan Bridge is the first thing that springs to mind, recreated viscerally as Lowood in Jane Eyre, and where elder sisters Maria and Elizabeth Brontë contracted the tuberculosis that killed them. Roe Head was a very different school, run by the kindly Miss Margaret Wooler, but even here we may bring to mind Emily Brontë’s return from homesickness after just a few weeks, Charlotte’s mental anguish as recorded in her ‘Roe Head diaries’ and the mental and physical breakdown that nearly killed Anne at the end of her tenure at the school. In this post, however, I want to look at a more positive aspect (it is the start of a new term after all) and see how Roe Head was often a happy environment for Anne Brontë, and one in which she thrived.

Anne was initially not destined for Roe Head at all. Charlotte gained a position as a teacher at the school in 1835, having been a pupil there four years earlier, and as part of her contract she was able to take a sister with here for a free education. This was a huge boon to the Brontë family, who although respectable in social terms were never wealthy; as the next eldest sister, Emily was understandably selected to go. During her brief time at Cowan Bridge Emily had, perhaps surprisingly, thrived. Just six years old, she impressed the staff with her ability as a pupil, and perhaps because of her tender age she was spared some of the hardships faced by other pupils. One teacher, Miss Evans, recalled of Emily at Cowan Bridge:

‘A darling child, under five years of age [sic], was quite the pet nursling of the school.’

The intervening years between Cowan Bridge and Roe Head had seen a great change in Emily. She had become reserved, and was already retreating into her fantasy world of Gondal. Charlotte soon saw that Emily was pining away in Mirfield, and that thoughts of the Haworth moors were always in her mind; she told Patrick to call Emily home or she would surely die, and remembering Maria and Elizabeth he acted immediately.

Even so it was not at first his intention to send Anne in his place, as he wrote in a letter to her godmother Elizabeth Francks:

‘My dear little Anne I intend to keep at home for another year under her Aunt’s tuition and my own.’

The offer was still too good to resist, however, and soon after Emily’s arrival in Haworth, Anne was on her way to Roe Head to take her place.

Anne was far more suited to school than her beloved sister Emily. She had a calm nature, and was obedient when given instructions. She was also a quick learner, and loved to gain knowledge. It was these qualities that led her to receiving a special award from Miss Wooler at the end of 1836. Along with a copy of a book by Isaac Watts, she was presented with a certificate that read: ‘A prize for good conduct presented to Miss A. Brontë with Miss Wooler’s kind love, Roe Head, Dec. 14th 1836.’

Anne was thriving educationally (it is her picture of Roe Head that tops this post), but as she was such a shy girl how did she cope with the demands of living among so many people unknown to her? A piece of evidence hidden away in a Leeds library shows that she handled this remarkably well, and formed a close bond with a pupil that is little known about.

Ann Cook is known today for an inscription that has caused controversy in the world of Brontë. In Charlotte Bronte’s book of common prayer there has recently been found an inscription saying:

These inscriptions were found by Gail Turley Houston who examined the prayer book at the J.P.Morgan library in New York. From the initials ‘A.C.’ the handwriting and the context, it is clear that these were written by Ann Cook at Roe Head. These facts were presented in a paper in 2011, and taken along with a letter from Charlotte to Ellen Nussey describing Ann Cook as ‘warm-hearted, prejudiced, affectionate and handsome’ it has led many to believe that there was some sort of affair between Charlotte and Ann, teacher and pupil. By taking evidence from a letter held in the archives at Leeds University’s Brotherton Library, however, we can get a very different reading.

Tragically, within a year of leaving Roe Head, Ann Cook was dead. The former classmate of Anne Brontë came from a very wealthy family, and it is clearly Ann Cook that Ellen Nussey is referring to in a letter she sent to Elizabeth Gaskell on November 15th 1855 at the time she was preparing to write her biography on Charlotte Brontë:

‘I enclose also a notice which dear C. made in a letter of the death of a young lady who was a pupil at the time Anne Brontë was at school, a pupil who attached herself strongly to Anne B. and Anne bestowed upon her a great deal of quiet affection and genial notice. I think the young ladies friends would most probably be gratified if dear C.’s comments on her decease were inserted. They are monied and influential people in the neighbourhood, some of them not very friendly to Currer Bell’s emanations. Would they not be won by her kindly thought of one of their own?’

We see here that Anne Brontë had a very strong friendship with a fellow pupil, Ann Cook. Ellen’s assertion that she attached herself strongly to Anne Brontë corresponds with Charlotte’s views on Ann as warm hearted, affectionate and prejudiced – prejudiced not to Charlotte, but to her sister Anne. It seems to me that Ann Cook’s inscriptions, though they were in Charlotte’s prayer book were intended for Anne Brontë who may also have used it. Anne Brontë was her great friend at school, it is she who is the sweet little thing, and she who is ‘my dear Miss Brontë’ (echoing her father’s description of her as ‘my dear little Anne’).

There is no scandal here, no love between teacher and pupil, just a deep and true friendship between Anne Brontë and her fellow pupil Ann Cook – and one that, until her nervous collapse in late 1837, would have made Anne Brontë happy at the thought of returning to school.

One thought on “Anne Brontë At School And Her Great Friendship”