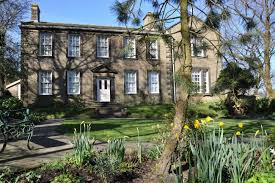 May I wish all the readers and followers of this Anne Brontë blog a very Happy Easter – whatever your faith. In our modern world, Easter is a reason to celebrate for the majority simply because it gives us an extra day or two off work, and an excuse to vegetate in front of the television and eat our own body weight in chocolate.

For Anne Brontë, however, Easter had a very different meaning. She was the daughter of a priest, and she fitted the role well. There is no doubt that Anne was the most religious of the Brontë siblings, and she gave religious concerns very deep thought. Sometimes too deep, as it seems that religious doubts led to her having a physical and mental breakdown while still at Roe Head School in Mirfield.

Calvinism was the dominating influence in the Church of England in Anne’s time, and it was a harsh creed that taught that once a sin had been committed the perpetrator was damned to hell for eternity. This ate away at Anne, until she found her thoughts obsessed with fiery torments for herself and those she loved.

Thanks to the influence of a Moravian priest, James la Trobe, who visited her when she was at her weakest point, when indeed she was close to death, she found a new vision of God – one who was kind and forgiving. This was much more aligned with Anne’s own beliefs, and she would study the Bible thoroughly to find scriptural evidence to back up her new loving faith. This is demonstrated in The Tenant Of Wildfell Hall, when Helen explains to her scandalised Aunt that all people will be saved eventually. Helen also explains that she has studied the original Greek of the Bible and that it has been translated incorrectly – what we now think of as meaning forever actually meant for a long time, so nobody’s punishment would be everlasting. Helen here is mirroring the thoughts, words and actions of Anne Brontë.

Anne’s strong belief in a loving and forgiving Lord brought brightness to her days, although she still found herself beset by doubts at times. She would have found the Easter week services especially joyous, as she knew that the somber ceremonies of Maundy Thursday and Good Friday, remembering the arrest of Jesus, and then his ordeal and crucifixion, were merely necessary stages towards the wonder of the Easter Sunday resurrection.

We know from Ellen Nussey’s evidence that Anne Brontë liked to sing, and indeed that she was good at it, as confirmed in this remembrance:

‘She sang a little; her voice was weak, but very sweet in tone.’

We also know that Anne loved to play the piano, and listen to it played, although she was not as proficient at the keyboard as Emily Brontë was. This then would be Anne Bronte’s idyllic Easter. A short morning hop to to her father’s church dressed in her very best dress and bonnet. Singing the hymns that she loved so much and listening intently to the day’s sermon on the resurrection and the salvation it brought. It was then back to the Parsonage, where she would listen to her beloved sister Emily play the piano as she herself sang in accompaniment. After dinner, and maybe even a hot cross bun, it is likely that Anne and Emily would go for a walk across the Haworth moors, as they so often did. They would revel in the sights of spring now increasing around them.

Easter would have been a time of complete happiness for Anne Brontë, and I hope it is for you and your family today – whatever your plans are.

One of the flowers that can be found in and around the moors at Easter is the bluebell, so I leave you with one of Anne’s sweetest poems as she looks back to happy childhood memories of the bluebell – but in doing so reflects on how different her life (as a governess) has become:

A fine and subtle spirit dwells
In every little flower,
Each one its own sweet feeling breathes
With more or less of power.
There is a silent eloquence
In every wild bluebell
That fills my softened heart with bliss
That words could never tell.
Yet I recall not long ago
A bright and sunny day,
‘Twas when I led a toilsome life
So many leagues away;
That day along a sunny road
All carelessly I strayed,
Between two banks where smiling flowers
Their varied hues displayed.
Before me rose a lofty hill,
Behind me lay the sea,
My heart was not so heavy then
As it was wont to be.
Less harassed than at other times
I saw the scene was fair,
And spoke and laughed to those around,
As if I knew no care.
But when I looked upon the bank
My wandering glances fell
Upon a little trembling flower,
A single sweet bluebell.
Whence came that rising in my throat,
That dimness in my eye?
Why did those burning drops distil —
Those bitter feelings rise?
O, that lone flower recalled to me
My happy childhood’s hours
When bluebells seemed like fairy gifts
A prize among the flowers,
Those sunny days of merriment
When heart and soul were free,
And when I dwelt with kindred hearts
That loved and cared for me.
I had not then mid heartless crowds
To spend a thankless life
In seeking after others’ weal
With anxious toil and strife.
‘Sad wanderer, weep those blissful times
That never may return!’
The lovely floweret seemed to say,
And thus it made me mourn.

One thought on “Anne Brontë At Easter: The Bluebells”