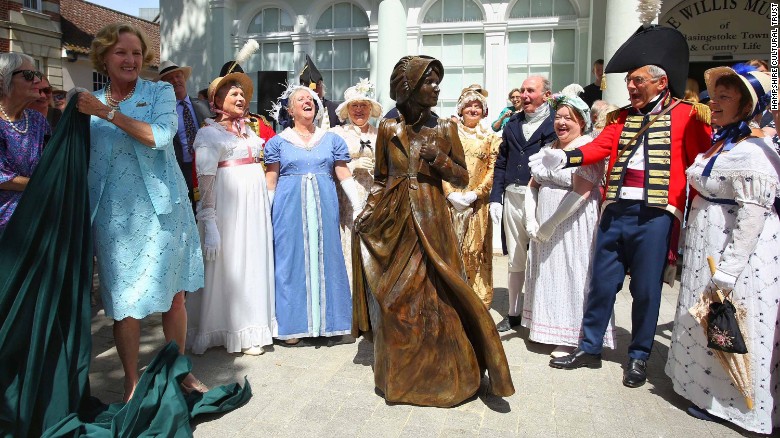 On this day, 16th December 2018, we say a very happy birthday to a great woman writer, but on this occasion she lived not in Haworth but in Hampshire, and not in Bradford but in Bath. Yes, today we we mark the 243rd anniversary of the birth of Jane Austen.

As you know, this blog is normally a Brontë rich zone, but Jane Austen is often linked with the Brontës due simply to her being a woman writer of incredible brilliance, so that in the minds of some members of the public it seeks that Jane and Charlotte become confused and the brilliant volunteers at the Brontë Parsonage Museum have to get used to being asked if it was the house that ‘Pride and Prejudice’ was written in.

Today we’re going to look at Charlotte Brontë’s changing opinion of Jane Austen. Jane, again erroneously, is often thought of, like the Brontës, as an early Victorian writer, but in fact she belongs to the generation before that and was very much a Georgian. Her birth year of 1775 was just a year before that of Elizabeth Branwell, who became known as Aunt Branwell after removing from Penzance to Haworth in 1821 to care for her sister Maria and, later, her children.
The world of balls and romantic intrigue so often portrayed by Austen must have been well known to Elizabeth Branwell in her younger years. Penzance, like Bath, had its own Assembly Rooms that held society dances, and as the Branwells were among the leading families of the town it is likely that their daughters would often have been in attendance, so that we can imagine the Branwell sisters being somewhat akin to the Bennett girls.

Nevertheless the world that Austen’s heroines, and to an extent Jane Austen herself and Elizabeth and Maria Branwell, grew up in was far elevated from that in which the Brontës were raised. Perhaps it is this, allied to the genius of their authors, that gives the Brontë novels a grit and realism that was controversial at the time. Certainly, at first, Charlotte Brontë seemed puzzled at the popularity of Jane Austen, as she confided to the critic G.H. Lewes:

‘Why do you like Miss Austen so very much? I am puzzled on that point. What induced you to say that you would rather have written ‘Pride & Prejudice’ or ‘Tom Jones’ than any of the Waverley novels. I had not seen ‘Pride & Prejudice’ till I read that sentence of yours, and then I got the book and studied it. And what did I find? An accurate daguerreotyped portrait of a common-place face; a carefully-fenced, highly cultivated garden with neat borders and delicate flowers – but no glance of a bright vivid physiognomy – no open country – no fresh air – no blue hill – no bonny beck. I should hardly like to live with her ladies and gentlemen in their elegant but confined houses.’

This is perhaps not so much a criticism of Austen, however, as a staunch defence by Charlotte of the writer she loved more than any other, Sir Walter Scott, author of the Waverley novels. Lewes, by the way, was the lover of Mary Anne Evans, better known as George Eliot. When Charlotte later met him she reported that she was moved to tears because he looked so much like her by then departed sister Emily.

Lewes wrote back to Charlotte in defence of Jane Austen, but she was not yet to be swayed:

‘You say I must familiarize my mind with the fact that “Jane Austen is not a poetess, has no ‘sentiment’ (you scornfully enclose the word in inverted commas) no eloquence, none of the ravishing enthusiasms of poetry” – and then you add, I must “learn to acknowledge her as one of the greatest artists, of the greatest painters of human character, and one of the writers with the nicest sense of a means to an end that ever lived.” The last point only will I acknowledge. Can there be a great artist without poetry?’

Two years later, however, in a letter of April 1850 to W.S.Williams, Charlotte reveals that she has now read more of Austen, and has found some good points:

‘I have likewise read one of Miss Austen’s work’s ‘Emma’ – read it with interest and with just the degree of admiration which Miss Austen herself would have thought sensible and suitable – anything like warmth or enthusiasm; anything energetic, poignant, heart-felt, is utterly out of place in commending these works: all such demonstrations the authoress would have met with a well-bred sneer, would have calmly scorned as outré and extravagant. She does her business of delineating the surface of the lives of genteel English people curiously well; there is a Chinese fidelity, a miniature delicacy in the painting: she ruffles her ready by nothing vehement, disturbs him by nothing profound: the Passions are perfectly unknown to her; she rejects even a speaking acquaintance with that stormy Sisterhood; even to the Feelings she vouchsafes no more than an occasional graceful but distant recognition; too frequent converse with them would ruffle the smooth elegance of her progress. Her business is not half so much with the human heart as with the human eyes, mouth, hands and feet; what sees keenly, speaks aptly, moves flexibly, it suits her to study, but what throbs fast and full, though hidden, what the blood rushes through, what is the unseen seat of Life and the sentient target of Death – this Miss Austen ignores.’

We see then that Charlotte Brontë praises Jane Austen for her writing ability, and her power to portray the wealthier classes, but still feels that she lacks passion. If she had known the sad story of Jane’s romances and losses she may have felt differently.

In my opinion, Jane Austen was undoubtedly a genius of the first rank. Her books move along with a lightning pace, each page a joy to turn, and yet they are also full of humour and satire. We can and should enjoy the Misses Brontë and Miss Austen, so let’s join together to say ‘Happy Birthday, Jane Austen’!