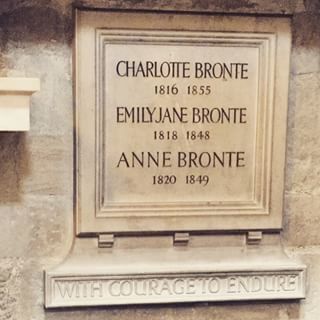 It’s December 19th, a happy day when Christmas is around the corner – but for one family on the western extremity of Yorkshire 169 years ago it was very different. Death had come to the Haworth Parsonage, and on December 19th 1848 it was to claim Anne Brontë’s beloved sister, Emily.

As children Anne and Emily Brontë, the youngest members of the family had been inseparable and although they were very different in appearance Ellen Nussey had described them as being like twins. As they grew older they often walked the moors together, created the fictional land of Gondal together, and wrote together, but at last a journey was coming that Emily must walk alone.

1848 had started triumphantly for the Brontës, as Wuthering Heights and Agnes Grey had been published jointly a month earlier and Charlotte’s Jane Eyre had become an overnight sensation. It was to end very differently. Their brother Branwell had sunk further into his drink and opium addiction, but his condition suddenly worsened and on September 24th he died. Whilst the official cause of death was put as ‘marasmus’ this chronic wasting had in fact been a sign of tuberculosis. At Branwell’s funeral, Emily started to cough too – it is thought that this was the last time she ever left the Parsonage.

It soon became apparent to all that Emily was gravely ill. She was becoming very thin and coughing violently, but refused any medical help and said that all doctors had was ‘quackery’. In vain, Charlotte consulted leading homeopaths, but Emily refused to take their medicines or followed their advice. It was dreadful for Anne and Charlotte to watch their sister carry on as if nothing was wrong with her, but as always once Emily had made up her mind she could not be dissuaded. Emily still insisted as always on feeding the dogs Keeper and Flossy from scraps of bread and meat held in her palm. A sudden draught blew underneath the Parsonage door and swept Emily off her feet blowing her against a wall. Refusing help even now, she slowly regained as if nothing had happened.

On the following morning, she had trouble rising but insisted on walking down the stairs and doing the household duties she had been carrying out as before. It is likely, however, that by now Emily had gone blind. ‘I’ll see the doctor now’, she finally said, but it was far too late. At two o’ clock in the afternoon of 19th December, 1848, Emily Brontë, the great solitary genius of the Yorkshire moors, died. We can imagine that her hand was held by Anne, the sister she loved more than anything else in the world. Six months later, tuberculosis would come back to claim her as well.

Death was not something Emily Brontë was afraid of, indeed she had often addressed it in some of her most powerful poetry, as shown here at the conclusion of her great poem ‘A Death-Scene’:

One long look, that sore reproved me
For the woe I could not bear –
One mute look of suffering moved me
To repent my useless prayer:
And, with sudden check, the heaving
Of distraction passed away;
Not a sign of further grieving
Stirred my soul that awful day.
Paled, at length, the sweet sun setting;
Sunk to peace the twilight breeze:
Summer dews fell softly, wetting
Glen, and glade, and silent trees.
Then his eyes began to weary,
Weighed beneath a mortal sleep;
And their orbs grew strangely dreary,
Clouded, even as they would weep.
But they wept not, but they changed not,
Never moved, and never closed;
Troubled still, and still they ranged not –
Wandered not, nor yet reposed!
So I knew that he was dying –
Stooped, and raised his languid head;
Felt no breath, and heard no sighing,
So I knew that he was dead.

In a moving letter to Ellen Nussey, two days before Christmas 1848 Charlotte revealed the aftermath of Emily’s passing:

‘Emily suffers no more either from pain or weakness now. She never will suffer more in this world – she is gone after a hard, short conflict. She died on Tuesday, the very day I wrote to you. I thought it very possible then she might be with us still for weeks and a few hours afterwards she was in Eternity – yes, there is no Emily in Time or on Earth now. Yesterday, we put her poor, wasted mortal frame quietly under the church pavement’

Yes, indeed there is no Emily in Time or on Earth, but to all those who read her words and love her she will live on in our hearts forever. And on that point, a big thanks to those who have provided me with support after my post last Sunday about the insulting selection of Lily Cole as Emily’s creative partner in the pivotal year of 2018. I was surprised by how much my words seem to have touched a chord, and I’m very grateful. The organisers of this calumny will not admit any fault, of course, and they even contacted me on Twitter to ‘clarify that there have been no consultants in the Bronte Society’, seemingly oblivious to their 2015 external consultants Rowie Shaw and Sue Charteris, not to mention the appointment of Kitty Wright as Chief Executive, whose LinkedIn profile begins: ”I’m a strategically focused communications and arts management professional, who has also worked in the legal sector. I have a record of leadership, change management, policy development and project delivery.’

Ah well, they certainly can’t prevent us all from taking down a favourite book and having a great Brontë Christmas!

One thought on “No Emily in Time or on Earth: The Death of Emily Brontë”