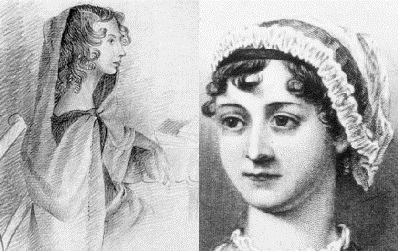 In a week that saw the release of ‘Pride and Prejudice and Zombies’ it’s time to take a look not at the Bennets versus the undead, but at Jane Austen versus the Brontës.

I once asked one of the hard working guides at the Brontë Parsonage Museum what was the question they are asked more than any other. It was ‘Which of the Brontë sisters wrote Pride and Prejudice?’, followed closely by ‘Is this where Jane Austen wrote her novels?’

It seems that many people today get the Brontë and Jane Austen mixed up, and it was a comparison that the Brontës had to live with in their lifetime as well; it was as unfair then as it is today.

On a personal level there are only superficial similarities between Austen and our favourite writing siblings. Austen was an early nineteenth century writer who never married and lived with her family throughout her life. So far, so similar with Anne, Emily and Charlotte (who only married in the last year of her life). Austen was writing earlier in the century than the Brontës, however, and she came from a wealthier family and a more exalted social position. For this reason, it was much easier for Jane Austen to find the time to write, and she was relatively free from worries about her income. It could also be why, in my opinion, her novels lack the grittiness, the integral truth, found in Brontë novels.

Certainly it seems that Austen was not a hit in the book loving Brontë household. Indeed, Charlotte Brontë insisted that she had never read her works until she was urged to by the critic G. H. Lewes. She was far from impressed:

“Why do you like Miss Austen so very much? I am puzzled on that point… I had not seen ‘Pride & Prejudice’ till I read that sentence of yours, and then I got the book and studied it. And what did I find? An accurate daguerreotyped portrait of a common-place face; a carefully-fenced, highly cultivated garden with neat borders and delicate flowers – but no glance of a bright vivid physiognomy – no open country – no fresh air – no blue hill – no bonny beck. I should hardly like to live with her ladies and gentlemen in their elegant but confined houses.”

It irked Charlotte that her books were being compared with those of a writer she had little knowledge of or regard for, and whose books she felt were completely dissimilar. It’s a comparison that persists to this day of course. Charlotte wasn’t the only Brontë to fall foul of an Austen comparison, as Anne Brontë too had a similar fate when she published fer first novel ‘Agnes Grey’. A newspaper called the Atlas wrote:

“‘Agnes Grey’ is a somewhat coarse imitation of one of Miss Austin’s charming stories.”

It’s a pity, of course, that the reviewer hadn’t found the stories so charming that he’d remembered how to spell Miss Austen’s name.

What then is the reason for the inextricable intertwining of Jane Austen and the Brontës today? Sad to say, but it must at least partly be due to the fact that they are all female authors, and yet Dickens and Thackeray, for example, are never confused. Charlotte, Emily and Anne chose male pen names because they were afraid they would not be taken seriously as female writers. How right they were, and they and females in many artistic and scientific fields are still suffering for it today.

One early twentieth century writer, however, thought it was unfair that Anne Bronte in particular was being overlooked in favour of Jane Austen. In 1924, celebrated Irish author George Moore wrote:

My opinion may not be the prevalent one, but in my mind Anne Brontë already has that higher place.